Do you remember your police academy firearms training? During the summer of 1986, at the local county police academy, a basic recruit class enjoyed a whole week of classroom and range training. Of the almost thirty student officers, only two or three had a difficult time qualifying on the paper targets (B27s) as they turned on a timer. The question raised by several instructors at that time was: How many of those student officers had been trained to the point where drawing, pointing/aiming their weapon and firing had become second nature?

In reviewing quite a few of the area firearms training programs today, it was discovered that few of them actually teach firearms handling and basic shooting skills beyond the level required to qualify on those turning paper targets. Sure there were those that included some “move and shoot” drills and a few others that incorporated reactionary (steel/metal) targets that fell when the officer shot them. Beyond that, a group of instructors sat down and had an in-depth discussion about firearms training and finally agreed on what would comprise a “complete” firearms training program.

All basic firearms training must begin in the classroom with handouts, overheads, diagrams, cleaning utensils, and firearms. It seems silly to have to say, but there should NEVER be ammunition in the classroom environment. In the classroom, nomenclature, safe handling rules, safe storage and transportation techniques, and operation of the weapon should be covered. Most of the firearms instructors in the group agreed that a little more time should be spent on maintenance since this seems to be an area where most officers tend to neglect their weapon.

After the classroom portion is complete and the student officers have all passed the written test, then the basic skills training on a firing range can begin. It was a surprise that the group of instructors agreed on a written test for the classroom portion, but verifying the successful transfer of knowledge, to a high degree (most instructors wanted a minimum passing grade of ninety percent!), was deemed mandatory. If remedial instruction on the classroom topics covered was necessary, it had to be discovered prior to getting those student officers onto the firing line. The firing line is not the place to be answering questions about handling or function. The firing line is where the student officers practice and perfect their techniques based on what they’ve learned in the classroom. 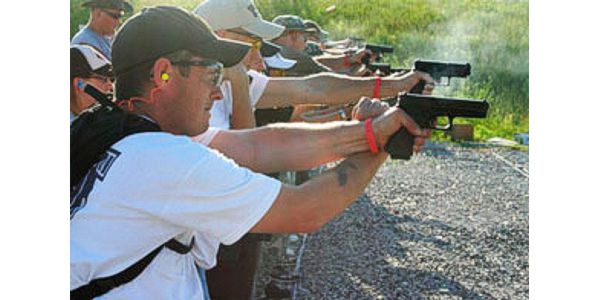 So, once on the firing line, drills must be conducted to teach loading, unloading and reloading; emergency loading; the basic fundamentals of shooting; shooting from different positions; clearing malfunctions and accuracy. To train a student officer appropriately might take more than the “allotted” amount of ammunition, but this is an area of training in which no department can afford to be cheap. This is also an area where the firearms instructors themselves have to be a little cold-blooded. No instructor wants to wash out a student officer, especially so far into a basic training program, but the hard truth is that some student officers will never master the art of shooting; the knowledge will also be hard for them to relate to and remember; the skills will never become second nature. They are the student officers who may have to be washed out of the academy for their own safety and the safety of their work mates.

During this set of basic skills training drills, the instructors/coaches must watch carefully and correct deficiencies as they are observed. The goal for this portion of training is to take all of the classroom knowledge and use it”in the real world”. The student officers may understand what sight alignment or sight picture means, but can they use that knowledge toward the placement of accurate shots? Remembering that habits are built with every shot fired, it is imperative from the very beginning of these drills that the instructors emphasize several things:

Of course those aren’t the only safe shooting rules, but when teaching basic firearms handling, those four rules overlap into Officer Survival and were deemed necessary to teach.

After many repetitions of drills, which enforce the basic firearms handling, and shooting skills, the student officers are usually fairly satisfied with their scores. A little competition is usually seen and this helps motivate the student officers to greater efforts to fine-tune their skills. Quite often, department firearms training stops at this point, with qualifications complete after the student officers have fired qualifying scores on these turning paper targets. Even worse, the “qualifying score” is often as low as seventy percent (70%)! Every instructor in the conversation felt that a minimum of seventy-five percent (75%) should be implemented with some instructors feeling that eighty (80%) or eighty-five (85%) percent should be a minimum. As the instructor discussion revealed, shooting paper targets is quite different from shooting a moving person, and evaluating the shooter’s judgment is next to impossible under these circumstances. In fact, it is often difficult to detect specific skill sets that the shooter may not have mastered yet. For those reasons, the training must move beyond this point. Departments who are training their officers only to this level of shooting competence are hurting the officers and the agency.

To truly observe which mechanical skills have been mastered, it becomes necessary to put the student officers in a setting which requires them to think about other things while required them to manipulate their weapons at the same time. This is not a difficult thing to do. A “Move and Shoot” course on reactionary targets is easy to set up and, with proper range management, can be used to put additional stress on the shooters. A basic course only takes twelve targets, maybe a balloon or two, a couple barricades, a picnic table, a mailbox (the big kind on city corners) and a fire hydrant. A safety note here: using frangible ammunition when shooting steal targets is mandatory!

It is common to start the student officer from a seated position in a police car and then, on the command of “GO”, start the timer. The student officer moves to the first firing position and then from there to the next, shooting the targets as required, but choosing the shooting position and reloading positions on his own. Knowing that he is shooting against the clock, and has to score certain hits, and has limited ammunition, as the time and stress builds, any weak skills the shooter has will become abundantly clear.

This type of training has several benefits. Above and beyond providing the instructor(s) with a tool that allows further evaluation of basic mechanical and shooting skills, it forces the student officer to think beyond handling the weapon. The student officer has to think about shooting position, putting the weapon on safe before moving, counting shots and choosing reloading positions. It also promotes competition and camaraderie among the student officers. That sense of competition puts further pressure on the shooters to cut their times and that might show the instructor(s) which shooters are willing to compromise good judgment for a few shaved seconds. That is very important as that sacrificed judgment will haunt the shooter and the agency eventually. It is imperative to correct it as early as possible.

The instructors, at this point, can start to feel comfortable with the basic handling and shooting skills of the student officers. The shooters have demonstrated their sufficient mastery of basic shooting fundamentals and their ability to combine those shooting skills with a low level of judgment. The basic skills have been demonstrated at a subconscious level and the instructors can move those student officers to the next phase of training which will have a greater focus on judgment and communication.

The important thing to remember is that as the student officers complete the simulations, they aren’t consciously thinking about their firearms handling and shooting skills. They should be totally focused on the simulations presented. This is a prime opportunity once again, for the instructor(s) to observe and identify any shortcomings in the student officer’s basic shooting skills.

Once the simulations have been completed, the final, and most important step is to provide scenario training. The types of modified training weapons available for this are many, but the important thing is to provide the student officer with training equipment which allows him to choose an appropriate level of force from anywhere on the Use of Force Continuum. It should not be considered sufficient to stop a scenario when the student officer says, “OK: here, I’d do this.” That does not adequately serve the training need.

As firearms instructors, it is important to remember that it is your responsibility to train the student officers beyond the “minimum acceptable” level of skill. If that officer ever gets in a shooting on the street, the basic skills you’ve conditioned into him or her is what will impact their performance. If you only teach enough to get enough holes in the right places on the paper target, that is what they will take to the street with them. If you teach enough to get proper judgment out of them while they display good weapon skills at the same time, then you’ve prepared them much better for the situations they’ll face in the real world.