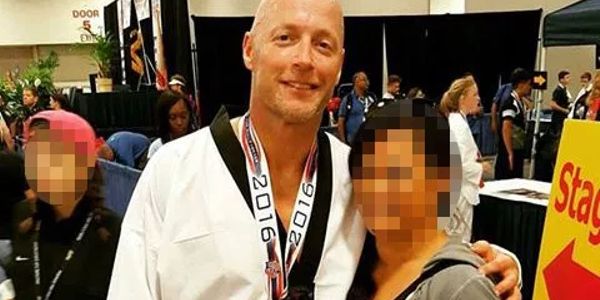 It’s not just people in the entertainment industry that are sexual predators. Please be aware, protect your yourself and your children, and speak out. Be aware that people, especially children, are often groomed by sexual predators. Sexual predators can be found in every profession and they know what they want and how to get it.

Q13 FOX SEATTLE – As taekwondo instructor, Robert Morrision, awaits trial on charges of child rape, one of his alleged victims spoke to Q13 News about what she wishes her mom would have known about the man who was paying her extra attention after school.

“It went from text messages to Snapchatting — and we’d like Snapchat all the time,” said ‘Sam’, a 17-year-old high school student who says she was raped by her taekwondo coach.

She spoke to Q13 News, on the guarantee we would protect her identity. “Sam” is known to the courts by initials; she is one of the alleged victims of Morrison, a 43-year-old martial arts coach in the Puget Sound area.

“It was during the fall, and that’s when I remember he first sent me a photo of himself,” she said.

Sam said the abuse started gradually three years ago when she was 14. According to court documents filed against Morrison, the taekwondo coach would Snapchat photos of himself to the teen.

“I just kind of took it as a joke,” said Sam, unsure what the text messages intended. She said it progressed quickly from there. “He’d say more things that were more sexual, just to see, like testing the waters.”

A few months later, when Sam turned 15, she told investigators that Morrison “began touching her on the inside and outside of her clothing a lot.” By the next year, she said her trusted coach was raping her at his home, in his car and at his taekwondo studios in Maple Valley and Renton.

“It would normally happen before class and then we would wait for everyone to leave and then it would happen then,” she said.

Sam’s mom said it all happened under her radar,.

“Everything seemed normal from the outside,” said mom ‘Christina.’

Hindsight now is everything. When asked if she felt groomed, she replied “absolutely … he gained my trust, to the point where I am asking him to help me raise my kid. He manipulated me.”

Christina said Morrison was not just her daughter’s coach, he was her friend for years. He was a father figure to their family, who had a wife and teen daughters of his own.

“I didn’t find it weird for him to come pick up my daughter,” she said. “I didn’t feel like it was weird for her to be over there, he has kids, too.”

Rebecca Milliman, the prevention and education coordinator for the Harborview Center for Sexual Assault and Traumatic Stress, said Sam’s story of abuse is textbook.

“It’s usually very premeditated, and to the outsiders it appears that person is just really, really nice, and really, really loves kids — and will go the extra mile to help them,” she said.

It’s not as uncommon as some parents might hope it is, especially as girls and boys get older.

“Up to 7 percent of middle school and high school students have experienced some form of physical sexual assault by a teacher,” said Milliman.

Teacher or coach, these types of predators have two main things in common — they’re in positions of authority and have unsupervised access to teens, she said.

“It’s this really thought-out, pre-planned process of developing this close trusting relationship, to take advantage of that,” she said.

Christina said that’s how things were perceived with her daughter’s coach.

“It was the way that he was there all the time, ready to pick her up at a moment’s notice, that was like completely out of his way and daily almost,” she said.

Sam said the closer Morrison got to her, the more he began to isolate her from her mother and used her friends against her.

Sam said, “Now looking at it, it was probably on purpose. To make sure that I wouldn’t tell anybody, especially my mom.”

Sam said Morrison used pet names for her that added to the pressure. She later found out she wasn’t the “only one,” like she had been told.

“He would call three of us his ‘angels’ and made it seem like it was this title that all girls like wished they could have with him,” she said. “It made me feel like I had to keep on doing whatever he wanted so I could keep that status with him.”

For concerned parents, Milliman said, keep your eyes open for red flags and your ears turned toward your teen. “Sometimes kids of all ages will drop hints. They’ll make little subtle comments to test the waters,” she said.

Teens will understand the consequences of sexual abuse allegations and, for some, may even try to protect their abuser.

“They understand that people will get upset, that rumors will spread around them; they are worried about things getting up on social media and pictures,” said Milliman.

She tells parents to remember that the older the child, the harder it may be for them to see themselves as a true victim. Sam said at the time, she didn’t see herself as the courts do. She said if she could talk to other teens going through something similar, she would tell them to speak up.

“Even though you may feel that it isn’t bad and you aren’t being hurt, it’s still bad and wrong. It’s wrong for them because they should know not to do that. And we’re giving our trust to them and they are hurting our trust,” she said.

Sam said most of all, she wants to say something to parents, “I think it’s important for them to actually be understanding,” she said, holding back tears.

Since 2016, when the case broke, three more teens have come forward with similar stories involving Morrison.

Morrison admitted to police that he sent teen girls photos, but has denied the rape charges.

He is currently awaiting trial in King County.