Martial Arts Champion Tyler Weaver’s Secret Battle With Autism shares not only about Tylers battle, but about what he and is family are doing for those on the autism spectrum.

Terry Wilson: In 2019 Black Belt Magazine profiled the amazing career of Tyler Weaver Jr. Tyler started winning National martial arts championships about the same time when most kids his age are still trying to learn how to ride a bicycle.

Tyler Weaver Jr: Karate and martial arts in definitely my thing, so I continued on training and doing my thing and now I’ve been doing it pretty much my whole life.

Terry Wilson: With more than 500 First Place wins, 100 Grand Championships and more than 44 World Titles by age 21, Tyler had achieved Superstar status as a member of Team Paul Mitchell.

Tyler Weaver Jr: This is Hyper Camp 2019 in Huntington Beach, California. This is where we’re here to basically teach martial artists and martial arts athletes around the world. There’s people from all over here. We’ve got people from Mexico, Canada. We have some people from Australia here. They’re here to learn new maneuvers, new combinations, flipping, acrobatics, weapons, everything like that, and we’re here to teach them and give them a good experience.

Roland Osborne: The Weavers come to an event like this and they really bring, not only just the energy, but the creative combinations and techniques. They have a whole unique style so it’s really cool, and also their kicks. They put different kicks and different tricks together and they teach cool little sets to everybody and so, you know, there are definitely a huge draw, one of the biggest reasons people come to the Hyper Camp is a train with Tyler and Ryker, because their just amazing instructors, amazing martial artist, and really, really creative.

Terry Wilson: For years Tyler had been keeping a secret, a secret from his fans, his family and even from himself because he had no idea that was every jumping kick and all of those lightning fast punches, he was actually doing battle against an affliction, an affliction that attacks 1 in 59 individuals in the United States every year.

Autism spectrum disorder (ASD) is a development disorder that affects communication and behavior.

Autism affects an estimated 1 in 59 people.

There is not one type of autism, but many.

Tyler Weaver Jr: I definitely know I have huge stress and anxiety. I’m a very, like, I’m a very simple person to plan straight forward, so if there is anything that changes, and stuff, it definitely triggers me.

Tyler Weaver Sr.: When Tyler was in third grade we started noticing something a little different about him. He was having a little difficulty with reading, writing, things that shouldn’t have been so difficult seem to be quite a challenge. After having our fourth child, Jasper, 3rd grade, same situation, having difficulty in school, socially, and then we see the exact same thing going on with Tyler. How is this tying together? We get Jasper officially tested and yes he has ASD1 so he’s on the Spectrum as well and that’s when we found out you know that’s obviously what Tyler’s challenges in life is as well.

Autism spectrum disorder (ASD) is a development disorder that affects communication and behavior.

Autism affects an estimated 1 in 59 people.

There is not one type of autism, but many.

Tyler Weaver Sr: These swings right here are for Jasper because they’re specifically for Autism, actually, yep we have two here, one for Ginger and one for Jasper

Terry Wilson: Now Ginger does not have autism?

Tyler Weaver Sr: She does not. Ginger doesn’t have autism, but, you know, you want to make sure that both, we don’t want her to be what’s called the invisible child, because when one has autism so much need for them, that sometimes one of the children gets neglected, so we make sure that doesn’t happen. And there they are now. That is cool isn’t it. When we found out that Jasper and Tyler were both affected and under the spectrum, we did change our life dramatically. We had 5 martial arts studios in the past 30 years here in Colorado, we sold them all and basically we restructured our entire life just to take care of Tyler, he’s 23 has a very difficult time holding down like a normal job, because the autism affects him in a way that he doesn’t sleep very well at all. So we’re focusing everything we do to help him get gainfully employed through something that we’re probably going to create for him. He actually can make music, while he picks up on musical things incredibly quickly, so he’s making music for people, mixing songs for them for competition, you know cuz something is used, and he enjoys it and he’s really good at it, actually, but that’s one of the things were thinking that might eventually be one of his ways of making money and having a career.

Ryker is just an amazing human being. Man, he really cares about his family, about his brother, they’re best friends, you know, he checks on him all the time. Tyler was having a hard time with his peers and some of the teammates so then we started sending Ryker with him all the time and he would go with him and take care of him and he could notice when tyler was getting overstimulated or overwhelmed with anything, he would take him back to the room or he would intervene and jump in there and be Tyler’s advocate and talk for him, because that’s the biggest thing when you’re under the Spectrum, just communicating back and forth can be rather challenging, especially if it’s in a situation you’re not used to.

Tyler Weaver Sr: So definitely think my mission is is I want to be able to help people my age or older are pretty much anybody that also is on the Spectrum. One of my goals, I guess, is I want to be kind of like a role model or leader to help other individuals that are also on spectrum and show them that they can get the help, they can, you’re not alone on this.

People understand people under the Spectrum, they know what they mean. I just hate that word. Every time I see it. I just know idiots around the world are just going to use that as a weapon against someone.

Tyler Weaver Sr: We did find out, today, in this meeting. Tyler, of course, was there and we start talking about autism and how it affects people, and he goes, I hate that word, and he got really livid, like he, really, he goes my mission in life is to change that word to Neurodiversity and no one will ever speak about autism again.

Tyler Weaver Sr: And so were thinking we might be taking this all the way up to the supreme court or all the way up to the Senate or wherever it need to go to get to see if we can get autism nixed, just like a while ago when I guess the word retard was nixed and it took a lot of effort and a lot of work, but I haven’t heard that word in a long time actually, so now we’re going to try to do the same thing with Autism. Just for Tyler, that’s his mission. He really dislikes it.

Tyler Weaver Sr: It’s the Weaver family. We’re doing Jaspie’s Journey. Most of the time we do martial arts stuff, that’s what we’re known for, but now we’re known for Jaspie’s Journey and that’s what we do, we travel around the country now. We’re based here in Colorado, but we’re going to set up these sensory relief, we’re going to try to get him at major sporting events different things, as well. This is Jasper right here, pretty much everything is based on what he goes through and what he experiences, so all the stuff you see here are things that he really enjoys, and so we’re kind of just passing it on so all the other kidos out there that maybe have a few challenges in life, and we’re trying to help out the best we can and serve the community.

The sensory rooms themselves are kind of design for somebody’s getting over stimulated. It’s really effective for people with Autism, of course that’s one of our specialties, but it could be for anybody. We’ve had a lot of different special needs actually come into our sensory rooms and decompress. We’ve set up an area where they can just sit and calm down. We can even close it down and what it does is just takes away all the excitement for a few moments and help some just come back to center, come back to focus, and sometimes people need a little extra like that. Ginger and Jasper, Ginger’s my daughter of course, he, he loves bunnies so we have all these bunnies created just for Jasper and Ginger and that’s what we call it Jaspie’s Journey and in our little logo, here, is the bunny, and he actually has a service pet that it’s been all over the place. He’s been the California, Texas. It’s a little bunny, it’s got its own little service coat. Bunnies, they don’t make noise, their quiet, their clean, so you’re able to travel with them and then anybody can pick them up at them and they immediately calm them down. Our whole mission with the bunnies right here is to help people just kind of diffuse.

This is our prototype, what we’re going to be coming out with an April. This is the one we created long time ago, about a year-and-a-half, and this is the one that the big companies are starting to make for us so we’re pretty excited about this one. We’ll be able to spread awareness, just like the pink house for cancer awareness.

Tyler Weaver Sr: We feel that these pods, these sensory relief zones that we’ve created are just as important as having a handicap parking spot, you know, when you go shopping or whatnot, so the people that need just a little extra help in life, you know, it’s, it’s available for them. That’s one of our missions and why we’re doing what we’re doing.

Also we’re developing a program to where people can kind of be certified to be considered autism-friendly and aware. Different studios are asking for that so were developing that right now and we’re just fine-tuning how to spread awareness and so we’re actually in with the community now we’re going to be hosting a community event. We’re bringing all the vendors and people with special needs or disabilities will be able to come to our event and find all the help that they could possibly want and it’ll be all in one spot, okay, and so that’s one of our missions now is bringing everybody together so we can help as many people around the world. 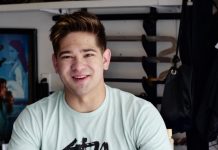 USAdojo - September 29, 2014
We use cookies to ensure that we give you the best experience on our website. If you continue to use this site we will assume that you are happy with it.OkRead more