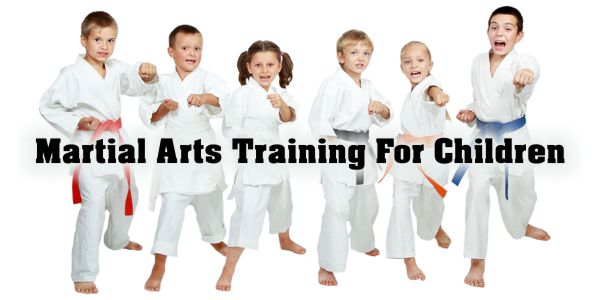 Ads extolling the benefits of martial arts training for children seem to be ubiquitous. Drive down the street on a lazy weekend afternoon and you’ll pass a few generic karate schools with large signs hawking children’s classes, while a quick flip through the paper or the yellow pages reveals ads promising that enrolling your kids will instill confidence and self discipline, lead to an improvement in their report cards, and teach them how to defend themselves in an increasingly dangerous world.

Many professional martial arts schools derive a large portion of their income from children’s classes, so it’s logical that they’ll be trying to sell you on the advantages of sending your children to them. But is it all just a sales pitch?

When I was 8 years old, my parents enrolled me in Tang Soo Do classes. I wasn’t a particularly athletic kid, and they thought it would be good for me to get some exercise and learn some self defense. I enjoyed my time there; it was a good after-school activity, and I made some new friends. Plus, I got some exercise and improved my coordination, balance, and flexibility. I found myself absorbed in the drills, the forms, and the sparring, and in hindsight, I can see how, for some children, the training could teach them how to focus and concentrate. It takes a sustained mental effort to perform a kata from memory, and sparring requires you to really focus.

For me, these skills didn’t translate into my schoolwork. To be fair, I don’t believe that it was the fault of the training, my teacher, or the art. Looking back, I can still recall how some of my classmates changed for the better as they advanced in rank. They grew more confident and seemed happier.

I guess I don’t have a problem with claims that learning some martial arts can make your children more confident, more focused, healthier, and happier. But I do take issue when a school suggests that your children will be able to defend themselves – either from a schoolyard bully or, more importantly, from an adult seeking to do them harm. There are several reasons why this is.

Firstly, children are small. Very small. Although superior skill and conditioning can sometimes compensate for inequalities in size and strength, a child seeking to defend himself from, say, a kidnapper would have to have nearly superhuman abilities to do so. Think about it this way: imagine the most fearsome or skilled fighter you know of – for illustrative purposes, let’s say Bruce Lee or Rickson Gracie or Mike Tyson at their prime. Now imagine any of them realistically fighting someone 9 feet tall and 380 pounds. As much as I respect these fighters’ skills, outside of a choreographed movie scenario, there is a high probability that these guys would get killed if they tried to take on such an opponent. Proportionally speaking, asking an elementary school student to take on an average adult male is like asking an adult man to take on such a behemoth.

And that’s assuming that your child has the skills of a Lee or a Gracie or a Tyson – skills that these very talented, very dedicated men took decades to develop. This brings me to my second point. I’m aware that, especially in the make-your-child-feel-good-at-all-costs environment of the United States, a lot of little kids have been awarded “black belts.” Well, although it should be obvious, a child black belt doesn’t have near the skill level or experience or understanding of an adult trained by the same teacher at the same school. Teachers are much less strict on their young students than they are on adults, and that’s as it should be. To teach a student how to fight, an instructor must be harsh, strict, and demanding. And the student has to learn how to tap into her killer instinct, to overcome any natural inhibitions he might have about intentionally hurting someone. Because in the end, that’s what defending yourself comes down to: hurting your attacker more than he can hurt you in as short a time as possible. Call me crazy, but I believe children simply shouldn’t be taught how to think that way; they’ll have plenty of time to learn how to mean when they grow up, and they shouldn’t have to learn how to defend themselves. That’s why they have parents and teachers and police officers. For a kid, karate class should be about exercise and fun, about learning how to focus and how to set a goal and achieve it. Not how to maim and kill.

I think it’s obvious that it’s unrealistic to think there’s any way, humane or not, to give a child all the skills and attributes he will need to take on an adult who wants to do her harm. But what about teaching your daughter how to defend herself from the schoolyard bully? This actually segues nicely into the next section of this article:

Advice for parents in choosing a school for their children

As with adults, choosing a dojo for a child involves deciding on a style and a school. If you live in a major urban area, you’ll likely have many many choices.

The right style
It’s always important to remember that most martial arts were developed for survival. As such, they tend to contain some rather dangerous techniques. You would never presume to give your child a loaded gun to carry around, so why would you give him something just as potentially dangerous? Thus, an important thing to remember when choosing a style for your child is how effectively an art can be watered down without losing its essence. For instance, it is difficult to make striking arts such as Muay Thai and wing chun “kid-friendly.” There’s no way to avoid teaching aggressive techniques in MT or wc. So how are you going to react if your child’s principal calls and tells you that your son threw a wing chun kneeling elbow into a classmate’s face and fractured the kid’s eye socket or that your daughter broke a kid’s ribs by repeatedly kneeing him in the torso? I hear many parents out there insisting that their children would never do something so violent or mean. Well, let me put this bluntly: bullshit. I believe children are innocent and sweet and adorable. But I also believe that they can be shockingly mean and nasty – yes, even your sweet little angel has a nasty mean streak that can come out if provoked. And since children aren’t known for impulse control, I don’t think teaching them efficient, powerful ways to be nasty is such a good idea.

For this reason, I recommend the grappling arts for children. Judo, jujitsu, Brazillian jujitsu, and wrestling are great for kids. These styles can easily be modified for safety without destroying their essence. Indeed, judo is basically jujitsu with the deadliest and most dangerous techniques taken out, and Brazillian jujitsu is basically judo that’s been modified by the Gracie family. Grappling arts are also great for kids because kids love rolling around anyway. Plus, if your kid does a judo throw on the playground bully or armlocks a classmate, you won’t have to live with the knowledge that your child maimed another for life.

The right school
It’s a good idea to shop around before picking a school for your child. Seeking out recommendations from your neighbors and friends should be your first step: see if any standout for their excellence or if anyone warns you about the teachers at a certain school.

You’ll also want to visit the school – and take your future black belt with you. Do the kids look like they’re having fun? Are they bright, enthusiastic, and display at least a little bit of skill? What about the teacher’s method of instruction? Is the instructor patient with slower kids, does he stress patience and respect when he teaches? What kind of one-on-one attention does he give to the students?

See what your child thinks. Does he think the teacher looks like a nice person? Is this the kind of thing he’d like to do? (When she answers that last question, make sure you stress that saying yes means making a commitment; make it clear that if he really wants to learn, he’ll be expected to go to every class and practice at home for at least the next six months. That way, your child will be learning a valuable life lesson right away.)

Also consider how much emphasis the school places on competing in tournaments. This is a matter of personal preference; I personally believe that it’s good for kids to participate in a tournament every now and then – it’s exciting, and it gives them a goal to go for. But some schools don’t believe in competing at all, while others seem to go to a tournament every month. You’ll want to pick a school that meshes with your parenting philosophy in that respect.

If everything looks all right to you, there’s still one last thing you have to do, but it’s the most important thing of all. You need to check the instructor out. Call your local better business bureau and see if there have been any complaints made against the school. Then check with your local police department to see if there have been any complaints filed against your instructor. You see where I’m going with this: pedophilia. We’ve all seen that priests, clergy, teachers, and coaches can violate the trust that parents and children place on them quite easily. Martial-arts teachers are no different; don’t assume that just because he wears a spiffy uniform with a black belt around his waist means that he’s a good person. Plenty of martial artists aren’t. I’ve never knowingly met or heard of a pedophiliac martial artist, but I have read news stories involving them.

The Benefits of Martial Arts Training For Children