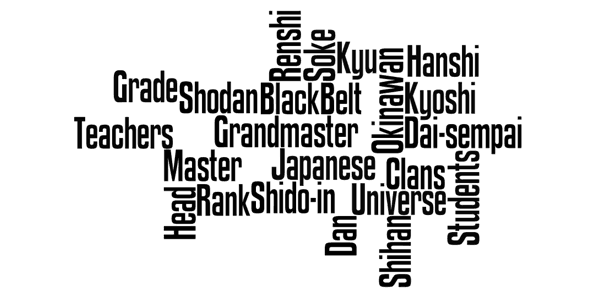 By Trevor Streets ~ It is an unfortunate aspect in the modern approach to martial systems that we seem to be obsessed with titles and rank in martial arts. Just a flick through any martial arts magazine will reveal a gamut of Soke, Shihan, and Hanshi. This was taken as granted in American publications but is sadly equally as true in the UK ones now. And I’m not just talking western budoka, there are as many Japanese/Okinawan nationals on the same bandwagon. But how has this come about?

So let’s turn the clock back and examine the older way of training in the martial systems, which are the pre-Meiji restoration, Koryu systems.

Here we had full time schools of martial training. Sponsored by the clan and used to train the clan soldiers and keep there skills sharpened ready for use. The skills taught ran from sword to empty hand and covered the use of any and every implement that was to hand. These were the days of effectiveness over aesthetics, there was no room for superfluous action and no time for movement that didn’t contribute directly with the neutralizing or killing of the opponent. Although the weapons have changed this is the same model as used today in modern armies.

So how was this structured? The school who have been headed by one individual and depending on the size and wealth of the clan he would have had a teaching staff under him. The students would have been divided into simple groups dependent on their ability, beginners, intermediate and advanced. No different to modern methods. In koryu systems these levels were called Shoden, Chuden and Okuden. The student was expected to progress through these stages by refinement and development of their physical abilities. A shoden kata performed by a shoden level student will be what it is; a shoden kata performed by a okuden level student will be executed as though it were an okuden kata. You can’t turn the clock back. Once a new level has been reached then all aspects must be viewed and performed from that level. On attainment of a competency of the okuden level there was no more to be taught. From then on it was just pure practise to keep the skills sharp and effective.

In effect the graduate of the school was told to clear off and free up dojo space for the next generation. If you think in terms of an educational facility then that is exactly the function of the teaching machine, take a beginner in at one end and turn out an effective fighting man at the other. Pure and simple.

The head of the school had to keep a lookout for those that obtained the aptitude and willingness to stay on and become teachers. This would have involved a different level of learning not superior to that already obtained at okuden, but rather the skills and aptitude to teach the shoden kata to beginners. In many ways this was the equivalent to our modern coaching schemes but in the koryu case the scheme was not generic but rather specific to that school, clan and tradition.

Here we get to the titles awarded to show levels of teaching ability. Starting with Renshi, progressing through Kyoshi to Hanshi. The pinnacle would have been the Menkyo Kaiden, which in essence said you understand the system enough to go off and start your own school. But make no mistake here; this certificate wasn’t given out of the generosity of spirit. The award had to be paid for with real hard currency. The existing school wanted paying for giving the opportunity to go and earn your own living from teaching their system. This could have been in the form of a one off payment or as a percentage of future earnings.

However, those with less noble ways soon worked out the way around this “franchising” of the school. Instead of paying the fee they would start a new style and put the prefix Shin (meaning new spirit in most cases) in front of the existing style name. You look at koryu schools and see how many have had a split in this way; and we thought karate was bad enough for splits and breakaways! We’re just following a long standing tradition.

So where have we got to? We’ve established that within the koryu the lines of training and teaching were a different and separate process. But how have we gotten from there to our modern day assumption that training long enough automatically gives the right to teach and to award yourselves honorary titles?

Unfortunately this goes back to the introduction of Karate to this country. The Japanese pushed individuals to open clubs when they were still in the Kyu grades. This was to expand the association and at the bottom line increase revenue. However, one downside of this push, this business plan, was that the notion of advancement in the technical aspects of the system went hand in hand with the knowledge to teach it. That getting a rank via grading automatically entitled you to teach at a higher level.

This has brought out a character flaw that seems very common in the west. An almost megalomaniac desire to adorn ourselves with titles and ranks. Hence the situation where fresh faced guy in their twenties are calling themselves Kyoshi. Men in their 40’s claiming Hanshi or even Shihan. This is a sadness.

Without doubt, we have men in the west who are the technical equivalent of any in Japan. But no matter how had we try we cannot be Japanese and nor should we try. If a lifetime of study in martial systems gives you anything it should be the backbone to stand on your own two feet and say this is my view take it or leave it. The willingness to assume titles for which we not truly entitled to shows a lack of self confidence that betrays the grade claimed.

A School Full of Pooh Bears

John Graden - April 1, 2013
We use cookies to ensure that we give you the best experience on our website. If you continue to use this site we will assume that you are happy with it.OkRead more