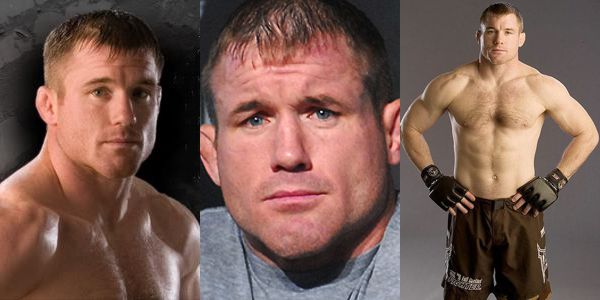 Matt Hughes was born in Hillsboro, Illinois on October 13, 1973. He is an American mixed martial artist, a member of the UFC Hall of Fame as of May 2010, and a former two-time Welterweight Champion. Hughes has two separate six-fight winning streaks in the UFC, won the welterweight title on two occasions, defended the belt a record seven times, and holds the record for most wins in the UFC. Matt also holds the record for most UFC fights with 23 along with Randy Couture and Chuck Liddell.

Matt was a long-time member of Miletich Fighting Systems, but in late 2007 he left the Miletich camp to start Team Hughes. Team Hughes fights out of The H.I.T. Squad (Hughes Intensive Training), a Granite City, Illinois gym, which he co-owns with Robbie Lawler, Matt Pena and Marc Fiore.

Hughes was a two-time 145 lb IHSA (Illinois High School Association) Class A state wrestling champion. He won in 1991 and 1992 while attending Hillsboro High School. Hughes is also a two-time Division I All-American wrestler, with an 8th and a 5th place finish in the 157 lb division. 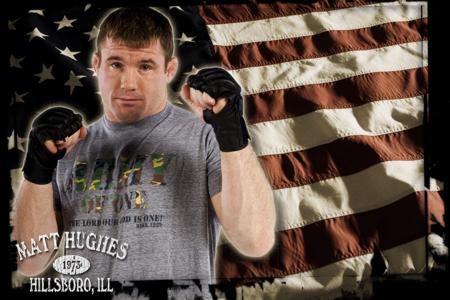 Hughes has competed in the prestigious ADCC Submission Wrestling World Championship, in which he held a record of 22. This consists of wins over Ricardo Almeida and Jeremy Horn, and losses to Jeff Monson and Tito Ortiz.

It was at UFC 34: High Voltage on November 2, 2001 that Hughes won his first UFC World Welterweight title. Caught in a triangle choke by Carlos Newton and ready to pass out, Hughes lifted Newton in the air and slammed him to the mat. Newton hit his head and lost consciousness. After the match Carlos stated that he felt the reason Hughes fell to the mat was because he was rendered unconscious from the triangle choke. This was confirmed by Hughes himself upon reviewing the tape of the match Hughes can be heard telling his corner after the fight “I was out.” In their subsequent rematch, Hughes won by technical knockout when he successfully trapped Newton in a modified crucifix position, which allowed Hughes to rain unanswered blows on Newton’s defenseless face.

Matt successfully defended his championship belt several times, defeating Hayato Sakurai, Carlos Newton (in a rematch), Gil Castillo, Sean Sherk, and Frank Trigg. He kept the title until UFC 46, when he was submitted by Hawaiian Brazilian Jiu-Jitsu specialist B.J. Penn via rear naked choke. The title was vacated upon a contract dispute between Penn and the UFC. Hughes regained the vacant welterweight title by submitting Canadian contender Georges St-Pierre via armbar in the final second of the first round at UFC 50.

Regaining his title, Hughes successfully retained it in a rematch with Frank Trigg at UFC 52. After taking an accidental groin hit, unseen by the refree, early in the first round, Trigg capitalized on Hughes’ pain with a barrage of punches. The fight went to the ground, with Trigg using ground & pound against Hughes and then going for a rear naked choke. After almost two minutes of struggle, Hughes broke free of Trigg’s choke attempt, picked Trigg up, carried him across the Octagon, and slammed him to the ground. Hughes began his own ground & pound on Trigg following with a rear naked choke, giving him the victory.

At UFC 56 Hughes was scheduled to fight Judo practitioner Karo Parisyan, but fought Joe Riggs tinstead. The match was originally scheduled as a title bout, but since Riggs could not meet the 170-pound weight limit, it became a non-title fight. Hughes defeated Riggs in the first round by kimura. On May 27, 2006 at UFC 60, Hughes defeated Brazilian Jiu-Jitsu legend Royce Gracie by TKO (strikes) in a non-title, catch-weight bout.

At UFC 63: Hughes vs. Penn on September 2006, Hughes defended his title in a rematch against B.J. Penn, stopping him in the third round. Hughes trapped Penn’s arm and landed approximately 40 blows to the defenseless Penn’s unprotected face, forcing the referee to stop the fight.

On November 18, 2006 at UFC 65: Bad Intentions, Georges St-Pierre defeated Hughes by TKO via strikes at 1:25 of round two, ending Hughes’ title reign. In the second round St-Pierre ended the fight with a head kick which stunned Hughes and knocked him to the mat. St-Pierre followed up with a flurry of punches and elbows that forced McCarthy to call a stop to the contest at 1:25 of round 2.

Following a championship win by Matt Serra over Georges St-Pierre at UFC 69, it was announced by Dana White that Hughes would again be fighting for the World Welterweight title in November 2007 against Serra. This fight actually took place in December 29, 2007 in Las Vegas, at UFC 79: Nemesis. On November 24 Serra sustained a herniated disc in his lower back and inform the UFC that he did not know when he would be allowed to compete again. As a replacement for the Serra/Hughes title match, the UFC signed a rubber match between Matt Hughes and Georges St-Pierre. This fight would also be for the UFC Interim Welterweight Championship. Despite his best efforts, Hughes was unable to mount any serious offense on St-Pierre. Near the end of the second round, St-Pierre attempted a kimura on Hughes’ right arm that Hughes escaped, but in a reversal of their first fight, St-Pierre was able to twist it into a straight armbar with fifteen seconds remaining in the round. Hughes fought the extension, but with his left hand trapped between the mat and St-Pierre’s legs, Matt was forced to verbally submit at 4:54 of the second round. In the post-fight interview, Hughes praised St-Pierre as the better fighter and stated his intention to take some time off and spend with his family.

Hughes also expressed an interest in moving up a weight class to middleweight so he could fight champion Anderson Silva if former champion, Rich Franklin was unable to beat Silva in their rematch at UFC 77. Silva won the match. Hughes stated that if the fight occured, it would happen in 2008 following his scheduled title shot against Serra, although the fight with Serra didn’t happen until UFC 98: Evans vs. Machida. On the second episode of The Ultimate Fighter: Team Hughes vs. Team Serra, Hughes revealed his intentions to retire from MMA, but tjis did not happen.

On June 7, 2008, Hughes fought Thiago Alves at UFC 85: BEDLAM. Hughes lost the fight to Thiago Alves due to referee stoppage (TKO strikes) at 1:02 in round 2. After receiving a powerful flying knee from Alves, Hughes dropped to the ground with his own left knee pinned behind his hips, ultimately leaving Hughes with a torn MCL and partially torn PCL. Hughes took the fight on short notice as a favor to the UFC. Alves failed to make weight for the match, but Hughes elected to fight him at a catch weight anyway.

Hughes agreed to be head coach again for the The Ultimate Fighter 6, alongside former UFC World welterweight champion, Matt Serra. Despite the fact that after the preliminary round, Team Hughes’ record was 2-6, both Mac Danzig and Tommy Speer of Team Hughes made it to the finals.

Following the Alves fight, Hughes stated that he had “one more fight” left in him, and that he wanted to fight Matt Serra. The two had hard feelings left from when Serra was a contestant on The Ultimate Fighter. Hughes won the grudge match against Serra at UFC 98 via unanimous decision. After the fight Hughes and Serra embraced each other and ended their feud. Hughes posted on his blog: “When the fight was over, I was pretty confident I was going to get my hand raised. Some people have asked why I raised his hand at the end. Actually I didn’t, he raised mine. He also told me that, no matter what the decision was, he was done with the rivalry”. After the fight Matt Hughes said “I think I have a few more fights left in me.”

Hughes then signed a multi-fight deal with the UFC and went on to defeat Renzo Gracie via TKO in the third round at UFC 112. This win set Matt Hughes with the record for most wins in the UFC with 17. On August 7, 2010 at UFC 117, Hughes choked Renzo Gracie’s student, and 3rd degree Brazilian Jiu-Jitsu black belt, Ricardo Almeida, unconscious via technical submission with an “Anaconda choke” at 3:15 of round 1. 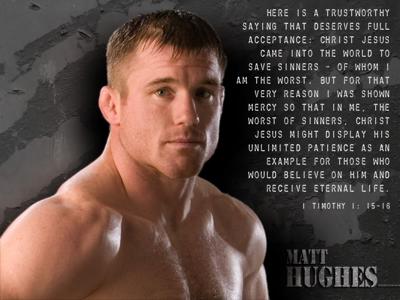 Matt Hughes is not perfect, but he believes in redemption as a born again Christian. He published his autobiography, Made in America: The Most Dominant Champion in UFC History.