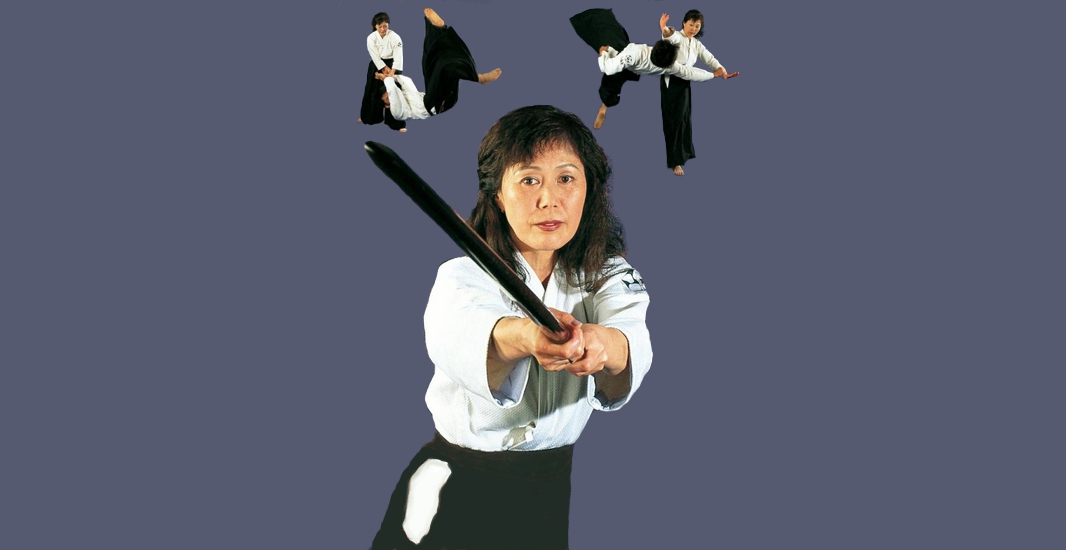 Miyako Fujitani, holds the rank of 7th dan. Her rank was conferred to her by the “Tokyo” Aikikai in Osaka, Japan. Miyako sensei has been practicing the art of aikido for 45 years. She received her shodan (first degree black belt) from the founder of aikido, Morihei Ueshiba. She married Steven Seagal in 1975 when Seagal was in his twenties. Her mother owned the building in Osaka where the aikido dojo was housed.

Aikido is a Japanese martial art that developed in the early 20th century. Aikido literally means “The Way of Harmony with Energy,” and the essence of its practice is the cultivation of ki (internal power, mental/spiritual energy). Although it does use weapons such as swords or spears, Aikido is not an offensive fighting technique but an art committed to peaceful resolution of conflict. Its basic technique places great emphasis on circular motion and the dynamics of movement.

Miyako Fujitani, a pioneer female Aikido instructor in Japan, stresses that the most important factor in the art of Aikido is not physical strength but the skill to control the flow of energy. Ms. Fujitani, Head Instructor of
Aikido Tenshin Dojo in Osaka, Japan, which she co-founded in 1976, discusses the history of Aikido, its spiritual/philosophical background, its connection with other traditional Japanese arts, her own techniques and style, and her experiences for more than 20 years as a leading female figure in a profession which, by tradition, has been dominated by men.

The Tenshin Dojo has recently opened a new branch in the LA area; the chief instructor is her son, Kentaro Seagal. Kentaro Take holds a 4th dan black belt in Aikido and shodan in Hokushin Itou Ryu Kenjitsu. He was raised at the Tenshin Dojo in Japan with the sound of Aikido ukemi on tatami mats never far away. He is an artist by nature.

One of her top students, Cody Lewallen, sensei opened the Aikido Shoubu Dojo in Tucson, Arizona.

USAdojo - May 10, 2000
We use cookies to ensure that we give you the best experience on our website. If you continue to use this site we will assume that you are happy with it.OkRead more