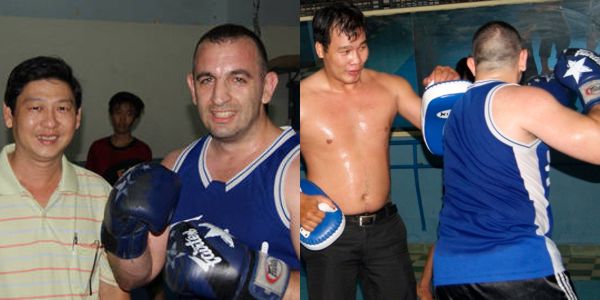 In 2007 I did a magazine story entitled, “Boxing the Vietnamese” about me training with a boxing team in Cholon, the China Town of Saigon. Ever since then, it had been my dream to go back and film with those guys for Martial Arts Odyssey. Also, I dreamed of getting my Vietnamese up to a level that I could train with them and have a deep martial arts and cultural experience as I had in other countries.

Finally, in March of 2011, I got there. My Vietnamese progressed to a level that I felt confident going over to Cholon to set up my training. Before going, I made prints of the photos from 2007, so I could share them with the coach, Kim Anh and with the athletes, if any of them were still around.

Since deciding to remain in Vietnam and study Vietnamese full time, I had been complaining that no Vietnamese people understood me when I spoke Vietnamese. But, when I went to the sports office in Cholon, everyone understood me.

When I trained there in 2007, I spoke Chinese to everyone. After the article ran in magazines, some foreigners turned up, wanting to train there. A few months ago, someone wrote me on the internet and said that he went to Cholon to train, and when they asked him how he knew about the gym, the guy said, “Antonio told me.” They didn’t know who that was, at first. But then suddenly, someone asked, “You mean the big American boxer, who speaks Chinese?”

It was nice to know I had been remembered, and not just for cheating at cards.

This time, I didn’t need to speak Chinese. We did it all in Vietnamese. This surprised me, because I thought that Vietnamese was going to be my linguistic Vietnam.

Not only did we arrange my training, but I told them about me having trained there in 2007 and showed them the photos. They all commented on how much better looking I was in 2007. They also said I was fat and old now.

This was meant to be a happy story, but I wanted to kill everyone so much. Instead, I handled the rejection like an adult. I bought several cakes and a number of ice cream pops and asked the fruit shake vendor to whip them up in the blender with coke, bananas, chocolate syrup, and heavy cream. Nothing like a sugar high, followed by a desperate crash into despair, and a few hours teetering on the brink of insulin coma, to chase the blues away.

On the first night of training, I walked in and introduced myself to the coach, Kim Anh. He said that he remembered me from 2007. We talked for quite a while, and then he just started laughing and saying, “I am so happy you speak our language now.”

Kim Anh was super nice, and he spoke to me in Vietnamese all during the training. This was really the first experience I have had of using Vietnamese, in any meaningful way, outside of the classroom.

I actually worked with a language school in New York once, where this was one of my jobs. I was paid a good wage to follow foreign executives around, attending all of their meetings with them, and translating English into other English. It was a way for them to learn and interact with natives, without stress.

I am very willing to keep paying my teacher by the hour just to run errands with me all day. I never thought I was going to be speaking Vietnamese for real stuff.

Thuan explained to me that Kim Anh was employed by the government and receives a salary for training the team. Now that Vietnam competes in combat sports in The South East Asia Games, The Asian Indoor Games, and the Asian Martial Arts Games, it’s a point of national pride to have boxing, Tae Kwan Do, Penjak Silat, San Da, and Muay Thai teams, ready to fight on the international amateur circuit.

Although the team was still the official boxing team for Southern Vietnam, they also had a Muay Thai trainer. Muay Thai is still fairly new in Vietnam, and they lack a pool of experienced amateur and pro fighters to draw from. So, the logical place to begin building a team was to start with boxers, and teach them to kick. Some of the guys were also black belts in Vo Co Tryuen, Vo Vinam or other local martial arts, and it showed when they were working the bag. They had apparently been taught how to throw Muay Thai kicks, but the years of doing martial arts showed through, and their kicks seemed somewhere between martial art and Muay Thai.

The Muay Thai trainer for the club was 27 year old Liem, who, at 93kgs, is one of the largest Vietnamese I had ever seen. He apparently fought pro in Thailand, even fighting in Lumpini Stadium, as recently as four years ago. The concept of fighters traveling at their own expense, as free agents, flying to Thailand, arranging training and fights for themselves, is extremely western. You just don’t find a lot of Vietnamese with similar experience. In fact, I tried researching fight records to find out about other pro fights between Thailand and Vietnam, but I couldn’t find even a single entry. Liam might be the only one. It would be interesting to find out if he had government sponsorship at that time, or how his training and fighting in Thailand came about.

Like all fighters in Thailand, Liem was covered with scars, most notably, a huge gash that ran from his forehead to his cheek, testament to his former profession. Liem took me to the wall, where he showed me a poster of himself from the King’s Cup in 2007. He was lean and looked like a regular Thai fighter, weighing in at only 68 Kgs. Now he is 27 and hugely fat, but still unbelievably dangerous if you wanted to fight him, which I obviously didn’t.

I always wonder what these guys think when they see me. He could definitely beat me in a fight. And yes, I am not as fit as I would like. But I will get it back in a few weeks. Meanwhile, I am still training and they aren’t. A few weeks from now, they won’t be in any better shape than they are right now. Their best days are behind them. For me, my life is full of ambivalence, but it still takes interesting turns from time to time.

We began the workout with group shadow boxing. I think this was primarily because of a lack of trainers and equipment. There were about 20 athletes and only two heavy bags. It seemed the bags were reserved for the better fighters. Every time I train with amateur teams I’m reminded of that fact that whether I am a good, bad or indifferent fighter, my training has generally been professional. I am used to working the heavy bag six rounds, followed by six rounds of pads, and then some rounds of sparring. But in this gym, they couldn’t afford to let anyone work the bag six rounds because it wouldn’t be fair to the others. Also, the only coach who took people on the pads was Liem. Once again, it wouldn’t have been fair to tie him up for six rounds.

Consequently, we did a lot of free shadow boxing. When it came my turn to get on the heavy bags, I realized the bags weren’t nearly heavy enough for me. They had been designed for Vietnamese boxers who weigh 55 kgs, not a heavyweight, foreign Muay Thai. The lighter bag was screwing up my timing, because each time I kicked it, it flew away. When I came with next kick or punch, the bag wasn’t where I expected it to be, and I often missed or wound up striking air.

My timing was also off because it was my first day back. My cardio was zero and I was getting winded fast. It had been seven months since I had last trained.

The worst feeling in the world is the first day back at training. It is so painful and demoralizing. But at the same time, this is a really happy day, because I know I am on my way to getting fit again.

The Coaches looked unimpressed with my bag work. I huffed and puffed. I couldn’t punch or kick with the speed or rapidity I am used to. Combinations were punctuated by long breaks in the rhythm. Sadly this is the phase you have to go through in order to get fit again. The problem, with age, this takes a harder and harder toll on my body. The answer, of course, would be to keep fit all of the time. But why would God make Mars Bars and Kit Kats if he didn’t want us to eat them?

The best thing about being back in training is that now I could be all self-righteous against people who don’t exercise. I could be like, “Wow! You are so lazy. Don’t you care about your body?” while forgetting the previous week I used an entire gallon of ice cream as a desert topping.

When the Martial Arts Odyssey episode aired, someone wrote the comment; “Eventually one of these shows is going to end in a heart attack.”

Liem took me on the pads, and in addition to being tired from my first day of training, I had a lot of difficulty following his instructions. He would often yell commands in Thai, which he had picked up in Thailand. I would respond in Thai, but it seemed he didn’t actually speak the language, just a few words. Other times, he would yell commands in Vietnamese. But because Muay Thai vocabulary isn’t covered till chapter 19 of my Vietnamese textbook, I didn’t know a lot of the words he was saying to me. Very occasionally, he would try and give a command in English, but his pronunciation was so far off that I often didn’t recognize which language he was speaking.