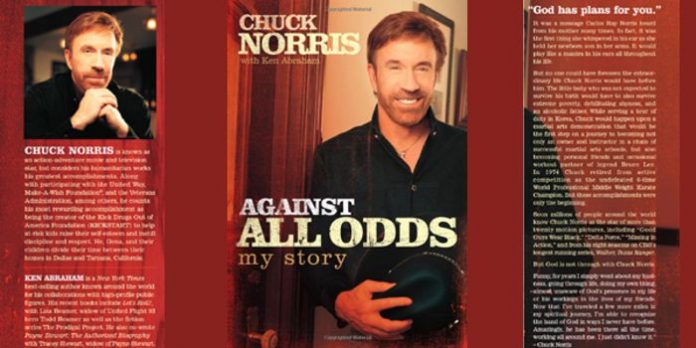 (AgapePress) – A Hollywood movie star and martial arts champion credits his faith in God with not only his successful movie and television career, but also with getting him through some of the most challenging times in his life.

In his book, Against All Odds My Story (Broadman and Holman, 2004), Chuck Norris recounts a childhood marked by his family’s economic hardships and his father’s substance abuse and infidelity. “I grew up in poverty, raised mainly by my mom and my granny,” he says, “and my dad, being an alcoholic and a philanderer, was very seldom in my life. Because of that, you know, I grew up extremely shy and introverted — and non-athletic.”

However, the film and TV actor-writer-producer says his mother played a major role in the development of his character and his faith, which helped him persevere to eventually become a martial arts champion and later to break into acting. “Fortunately for me,” Norris says, “my mom was a very strong Christian woman, and she kept me very grounded in my faith. That was really what pulled me through being an at-risk child to overcome a lot of the obstacles in my life.”

Today, the versatile Chuck Norris is internationally known for any number of accomplishments, including his record as an undefeated, six-time world champion in Karate, an extensive film career in action-fests like Delta Force, Lone Wolf McQuade, and Missing In Action, and his popular portrayal of an earnest, down-to-earth, lawman in the contemporary western action TV series, “Walker, Texas Ranger” (CBS, 1993 – 2001).

But this Hollywood heavy hitter points out that he was not born a success story. He acknowledges that his Christian faith has helped him get through the tough times. And during his stint as star, executive producer, and occasional writer on “Walker, Texas Ranger,” he tried to find ways to integrate his faith into the show.

The first time he had a chance to inject his faith perspective into an episode, Norris explains that he had to do a little selling of the idea to CBS executives. But the gambit paid off. “I said, ‘Look — let me do one,'” the TV action hero recalls, “‘and if it’s not successful, I will never ask you again.’ So I did one called ‘The Neighborhood,’ and it wound up becoming our first top-ten-rated show on the network.”

Ever mindful of how far God has brought him, Norris also looks for ways to help other kids growing up with challenges. That is why he is donating all proceeds from Against All Odds to the KICKSTART Foundation, a school curriculum program that teaches martial arts to at-risk children in inner cities throughout the United States.

Passionate about saving and changing kids’ lives, Norris often featured current students and graduates of the KICKSTART program in episodes of “Walker Texas Ranger.” Among other goals, the program seeks to encourage students to resolve conflict productively, avoid participating in gangs, choose drug-free lifestyles, and stay in school until they graduate.

Keeping It Real! “The C.U.T.S. Method

Living Lessons: Just because someone told you so, doesn't mean it's...