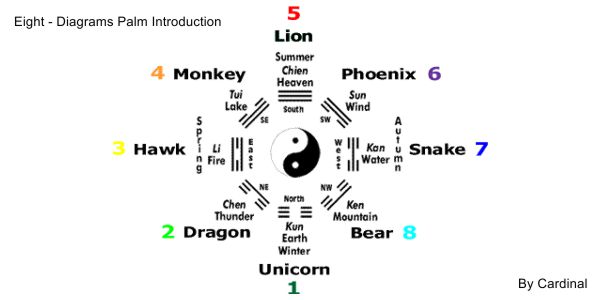 Pa Kua Chang (Eight Diagram Palm), is also known as Ba Gua Zhang. It is one of the primary internal systems of the Chinese martial arts, the others are Tai Chi Chuan and Hsing I Chuan.

Pa Kua Chang is an art based on evasive footwork and a kind of ‘guerilla warfare’ strategy applied to personal combat. A Pa Kua fighter relies on strategy and skill rather than the direct use of force against force or brute strength in overcoming an opponent. The strategy employed is one of constant change in response to the spontaneous and ‘live’ quality of combat.

Pa Kua is a very circular art that relies almost entirely on open hand techniques and full body movement to accomplish its goals. It is also characterized by its use of spinning movement and extremely evasive footwork. Many of the techniques in Pa Kua have analogs in other Northern Chinese systems, however, Pa Kua’s foot work and body mechanics allow the practitioner to set up and execute these techniques while rapidly and smoothly changing movement direction and orientation. Pa Kua trains the student to be adaptable and evasive, two qualities which dramatically decrease the amount of physical power needed to successfully perform techniques.

The basis of the various styles of Pa Kua Chang is the circle walk practice. The practitioner ‘walks the circle’ holding various postures and executing ‘palm changes’ (short patterns of movement or ‘forms’ which train the body mechanics and methods of generating momentum which form the basis of the styles’ fighting techniques). All styles have a variation of the ‘Single Palm Change’ which is the most basic form and is the nucleus of the remaining palm changes found in the Art. Besides the Single Palm Change, other forms include the ‘Double Palm Change’ and the ‘Eight Palm Changes’ (also known variously as the ‘Eight Mother Palms’ or the ‘Old Eight Palms’). These forms make up the foundation of the Art. Pa Kua Chang movements have a characteristic circular nature and there is a great deal of body spinning, turning and rapid changes in direction. In addition to the Single, Double and Eight Palm Changes, most but not all styles of Pa Kua Chang include some variation of the ‘Sixty-Four Palms.’ The Sixty-Four Palms include forms which teach the mechanics and sequence of the specific techniques included in the style. These forms take the more general energies developed during the practice of the Palm Changes and focus them into more exact patterns of movement which are applied directly to a specific combat technique.

Training usually begins with basic movements designed to train the fundamental body mechanics associated with the Art. Very often the student will begin by practicing basic palm changes in place (stationary practice), or by walking the circle while the upper body holds various static postures (Hsing Chuang). The purpose of these exercises is to familiarize the beginning student with the feeling of maintaining correct body alignment and mental focus while in motion. The student will progress to learning the various palm changes and related forms. The Sixty-Four Palms or other similar patterns are usually learned after some level of proficiency has been attained with the basic circle walk and palm changes. Some styles practice the Sixty-Four Palms on the circle while other styles practice these forms in a linear fashion. All of the forms in Pa Kua Chang seek to use the power of the whole body in every movement, as the power of the whole will always be much greater than that of isolated parts. The body-energy cultivated is flexible, resilient and ‘elastic’ in nature.

In addition to the above, most styles of Pa Kua Chang include various two- person forms and drills as intermediate steps between solo forms and the practice of combat techniques. Although the techniques of Pa Kua Chang are many and various, they all adhere to the above mentioned principles of mobility and skill. Many styles of Pa Kua Chang also include a variety of weapons, ranging from the more ‘standard’ types (straight sword, broadsword, spear) to the ‘exotic.’ An interesting difference with other styles of martial arts is that Pa Kua Chang weapons tend to be ‘oversized,’ that is they are much bigger than standard weapons of the same type (the extra weight increases the strength and stamina of the user).
(From Asia Pacific Universe)