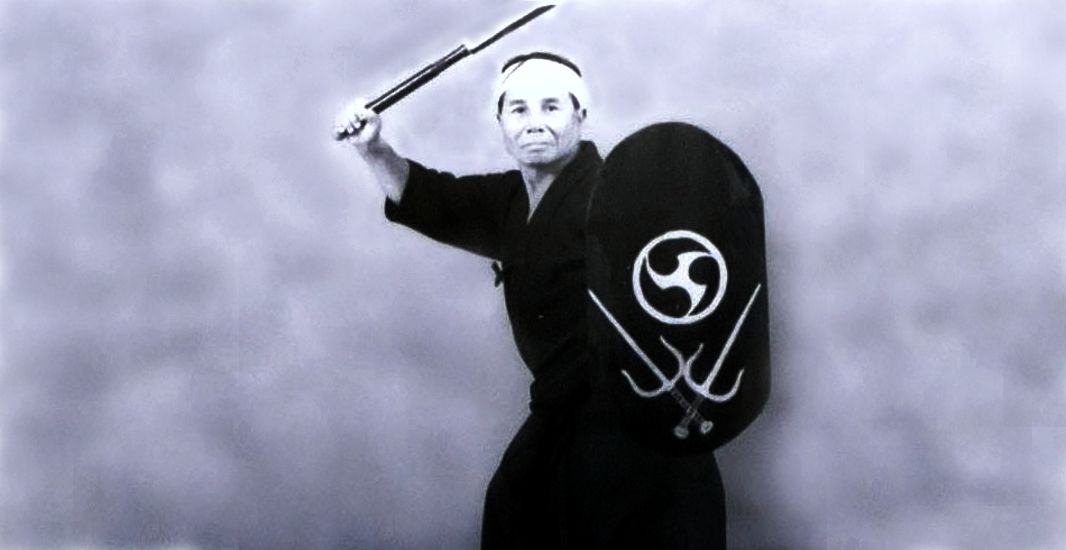 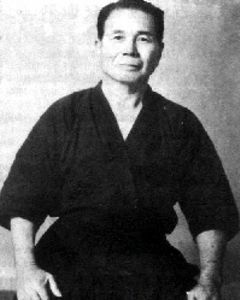 Shinken Taira called “The Father of Modern Kobudo” was born Shinken Maezato on June 12, 1897 on the island of Kumejima (Kume Island) off of Japan. Shinken Taira was the second son in a family of one girl, and three boys, however, as was often the custom young Taira was put up for adoption. Later in life Master Taira would decide to use the name Taira, which was his mothers maiden name. Tradition has it that Master Taira was introduced to kobudo by his grandfather Kanegawa Gimu (1862-1921) although some sources say it was not through his grandfather. Young Taira acquired the nickname of Mosa, which means rascal, due to his mischievous nature. Taira finished grade school at the Nakazato Jinjo Elementary School.

After finishing school Young Taira went out on his own in search of work. He eventually landed a job working at the sulfur mines on Minamijima Island, an island next to his home island of Kumejima. Young Taira worked hard but disaster struck when a support beam in the mine collapsed trapping him under the rubble. Fortunately he was able to dig his way out of the mine, however, he sustained injuries, including lacerations, contusions, and a badly broken leg which was to leave him with a limp for the rest of his life. Master Shinken Taira was unable to continue working at the mine and had to return home to Kumejima Island. Eventually he landed another job as a miner at Kitadaito Jima, but quit after being mistreated and ridiculed by his fellow workers, calling him such names as worthless and useless, because of his health and physical condition, which was a result of his injuries at the mine. This prompted young Master Shinken Taira to attempt to improve his physical health. He decided to move to Tokyo to start anew. At first he thought of studying judo with the famous Jigoro Kano, however, his need for work and the other life essentials seemed to smother this idea to study judo. Providentially like many Okinawans that moved to Tokyo Master Shinken Taira found accommodations at the Meisai Juku an Okinawan dormitory for students, where he met the legendary Gichin Funakoshi.

As of September 1922 young Shinken Taira being very impressed with his meeting and conversations with Master Funakoshi had became a student of the Master, and he became a Uchi-Deshi or live in student at Funakoshi’s dojo. He studied hard eventually becoming an Assistant Instructor at Master Funakoshi’s Dojo. During Master Shinken Taira’s studies with Master Funakoshi they traveled extensively in the Kanto area promoting and demonstrating karate at several universities, including Nihon Medical University, Chuo University, Ritsumei University, and Meiji University. During these demonstrations Master Taira would often perform Tameshi Wari and could break as many as 6 boards at a time utilizing a shuto or knife hand strike. As a result of his rigorous training under Master Funakoshi his health was restored and his physique became that of a strongman.

During his studies with Master Funakoshi for some seven or eight years, he met other Okinawan karate masters providing him with a strong foundation and background encouraging him to broaden his studies to include kobudo. As of 1929 he was studying directly under Master Yabiku Moden, the main kobudo Master on the island of Okinawa at that time. In 1932 he moved to the Gunma Prefecture. At this time he also opened his first dojo at the Hot Springs Resort of Ikaho, Ikahononsen City. In August of 1933 at a seminar Master Shinken Taira was awarded his Shihan Menkyo certification or instructors certificate, by Master Yabiku Moden.

Many of Master Mabuni’s students also later supported Master Taira. Such as Sakagami Ryusho, Master Mabuni’s Son, Kunishi Yasuhiro, Kuniba Shiyogo, and Hayashi Teruo, as well as both Eizo and Tatsuo Shimabuku. It was these men that were responsible for the spread of Master Taira’s Kobudo throughout the world.

Through Master Shinken Taira’s efforts a standard methodology of teaching was established which formerly did not exist. He was responsible for studying and preserving dozens of neglected kobudo traditions. He went on to produce several of his own kata which became famous in their own right for such weapons as, the Sansetsuken or three sectioned staff, the Tekko, two kata for the Nunchaku, and a kata embodying the central elements of staff fighting, Kungo No Kun.

Master Taira was very innovative and created a formal exercise to augment his theories of Sai Jutsu by creating a modified weapon (a unique design of the Manji Sai which is used on the end of the Nunte Bo – a bo with a sai at the end attached as one instrument) called the Manji Sai. He got the idea for the weapon while meditating in a temple in the Gunma Prefecture, though some say it was a local Buddhist Temple outside the city, where he had gone to pray for the success of his new dojo. It was while at this Temple where he noticed an unusual religious ornament which was a large Manji, the ancient Sanskrit symbol of life and rebirth, which reminded him of an Uchinan No Nunte, or Okinawan fishing gaff, which is shaped similarly to a swastika or Manji. Upon this interesting experience at the temple he went back to his dojo and created the design for his unique version of the Manji sai and a kata utilizing his new weapon which embodied his theories of Sai Jutsu. His new kata was a combination of techniques he had learned from other sai kata, but it also took advantage of the Manji sai’s unique shape which he had created. His new weapon had sharp points on both sides of the weapon. This new kata he created was called Jigen No Sai. An interesting note was made that the name Jigen No Sai can be translated as “foundation of love”, or “compassion”, this choice for the name of the new kata may have been deliberate, since he came up with the idea of the new weapon while at a Buddhist Temple.

Master Shinken Taira returned home in 1940 where he continued his research and teaching. By 1944 World War II was in full force and suffering on his home island of Okinawa was at an all time high. Master Taira and a few of his students teamed up with a local group of entertainers and decided to tour the island to help lift morale. After the war was over he returned to his home village, Kume Jima, where he helped the Allies to rebuild which gained him much popularity.

In 1948 he resumed his work of restoring kobudo as a prominent art. During this time he met Kamiya Junsei a legendary Okinawan bo/sai authority from whom he learned the Choun, Soeichi Bo Jutsu, and the Yaraguwa Sai Jutsu. Also around this time he founded the “RyuKyu Kobudo Kenkyu Kai” realizing that he alone could not carry on such a massive work. This society was created to collect, preserve, and promote Okinawa’s kobudo legacy. His following became widely supported by many masters of Kobudo and Karate-Do to numerous to list.

His notoriety gained him international acclaim especially among the American Armed forces. As a result the U.S. military asked Master Shinken Taira to do exhibitions which were covered by all branches of the media including TV and radio. He was then asked to introduce his work to the U.S. which he did for fifteen different weapons with full directions, and complete sets of photographs illustrating their use, which are kept at the Smithsonian Institute.

In 1960 he was awarded an Honorary Shihan Menkyo or Teachers License, from the Institute of Ancient Japanese Martial Arts Studies by the 14th headmaster of Koga Ryu Ninjitsu and President of the institute. In 1963 he formed the “Kokusai Karate Kobudo Renmei International” or “International Karate/Kobudo Association”. He also published his first book on his research called “RyuKyu Kobudo Taikan” or the Encyclopedia of Ryukyu Kobudo. This book, now out of print, illustrated a few kata and biographies of the most acclaimed masters of Okinawa. RyuKyu Kobudo Taikan was supposed to be the first of five books to be published, but as a result of failing health Master Shinken Taira was never able to complete the other works.

In 1964 he was awarded his Hanshi Menkyo or Masters Certification, from the Zen Nippon Kobudo Renmei. During his life Master Shinken Taira also developed an oversized makiwara or punching board, used for the bo to build power and improve kime (focus) and accuracy. He also created bo and sai from bamboo, based on the design of the Kendo shinai, and experimented with and attempted to create armor for full contact weapons sparring, which would be strong enough to resist the blows of a staff, and yet flexible enough so as to not hinder movement.

These efforts were later abandoned by Master Shinken Taira most likely because of the war and shortage of materials. During his lifetime Master Taira learned and mastered the use of many weapons such as, the sai (metal truncheon), bo (6″ staff), Eku (oar), Tonfa (right angled hand truncheon), Nunchaku (wooden flail), the three sectioned staff, Manji Sai, Nunte Bo, Tekko, and as many as six other weapons, for a total of over fifteen weapons, and over thirty kata.

In 1970 with his health failing and fearing that his work would disappear he promoted his number one student Akamine Eisuke, awarding him his Shihan Menkyo, or full Teachers License, and changed the name of his organization to the “Ryukyu Kobudo Hozon Shinko Kai”. Later that same year Master Shinken Taira died on Thursday, September 3, 1970 from stomach cancer at age 73 surrounded by over 50 of his students. His number one disciple Akamine Eisuke carried on his legacy and taught until his death in 1999.

Renshi Matt Zagacki began training on March 27, 1987. He has studied Isshinryu karate, aikido, Japanese and Brazilian Jujitsu, kendo, arnis and Okinawan weapons. Matt is a 2nd generation student of Isshinryu as his original instructor traveled to okinawa to study with the founder directly as well as being a student of one of the first pioneers of Isshinryu, Don Nagle. Matt Zagacki is a member of the IKWA (Isshinryu World Karate Association) and the Shinjitsu Kunren Kai and is proud to be a student of Shihan Marvin Carmona. Renshi Matt Zagacki owns and teaches martial arts at the Pennsylvania Martial Arts Academy.

For more information about Matt Zagacki and Pennsylvania Martial Arts Academy visit their listing on the Martial Arts Schools and Businesses Directory by clicking on the image on the left.