The main secret of Systema SpetsNaz No Contact Combat is an ability to blend in with an opponent unnoticed. 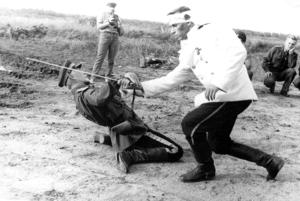 The goal of any martial artist is to overcome an attacker as quickly as possible with a minimum amount of force and time. All humans are genetically born with abilities and instincts to survive in extreme situations, but the training methods for improving these abilities are different in each Martial Art. Different styles of combat around the globe developed their own methods of self defense and pass the knowledge from one generation to another. 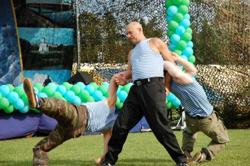 Systema SpetsNaz “Russian Style” Combat carries old traditions of the Cossacks and the modern training of Special Forces. One of the unique aspects of Russian System that it was created based on laws and principles of anatomy, physics and mechanics. There are no techniques to memorize; the motion itself serves as the technique utilizing internal wave energy, making the applications efficient and realistic for combat. Life is one continuous motion; constant change and adaptation are elements of survival. Russian Style utilizes the same elements of natural flow of energy in offensive and defensive techniques applying internal and external exertion of force.

Technique of No Contact Combat draws its knowledge from historical experience of Russian Warriors and developments of science in the area of reserve human’s abilities. This system is continually upgraded, discovering new psycho-physical abilities of the human mind. Throughout history, Russia was involved in many wars acquiring a great deal of combat experience.

Russian fighters were not scared of death, their mental training gave them courage and wisdom to survive and win; sacrificing their life for their country, family and friends was and still is considered a great honor. 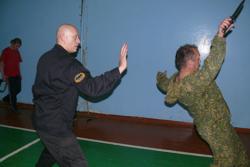 The energy which makes the person fall without physical touch is applied to the energy field of an opponent. It works similarly to the remote control of the television, creating wave impulse which directs the motion and stability. In Asian Martial Arts, chi can be extended beyond physical body – in Russian Martial Arts the concept of chi is used in a similar way, adding modern developments of science as well.

Psychophysical training prepares SpetsNaz fighters to last a long time without food or water, travel long distance by foot, ignoring physical and mental pain and rehabilitating themselves in case of an injury. This method is an excellent tool for the improvement of personal health, in overcoming stress, in strengthening the immune system, improving breathing and central nervous systems, and in clearing mental functions. Training prepares and individual to become emotionally balanced, achieving positive results in one’s personal and professional life.

To develop the sensitivity of the chi, exercises are practiced in a relaxed physical and mental state. Meditation techniques with breathing applications are used to tap into the sub consciousness, generating invincible spinning power, which catches an attacker and makes the body drop to the ground as if it was thrown or knocked down. It is considered to be the highest level of mastery in Martial Arts. 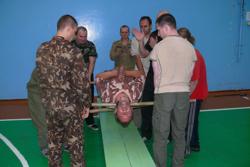 There are several steps in No Contact training. The first is to learn how to generate and use your own energy. Training prepares a student for the higher mental level, allowing the body to remember how it was initiated by using imagination and feelings. Training is done in the relaxed physical and psychological state – without the presence of thoughts, similar to being drunk.

The concept is to direct an opponent’s consciousness, an effect is exerted on the right hemisphere of the brain creating images and illusions. The opponent’s brain does not have the time to process the information making him chase the ghost. When a person is within this state of mind he becomes like a robot easily controlled. The task is to guide an attacker within the trajectory of the fall motion. 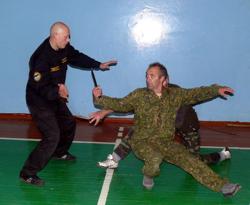 Start by finding something similar with an opponent: posture, breathing, same body motions with equal speed and rhythm using linear or mirror concept of copying an opponent’s movement. When connection is established, you become a twin or outward reflection. The concept is to imitate the opponent’s movement and then change it. For example, you can suddenly squat and lean to the side – pulling an attacker in that direction. An effect is applied to the brain creating an illusion. If an opponent is punching towards the head blend in with the speed of the motion, imagine that your hand is virtually extending toward an opponent. This will create an energy field and invisible connection between you and opponent, between your and his bio-system. The next step is to break that connection. The attacker will feel emptiness and fall or miss the strike.

The human brain is affected in many ways; it reacts to the information that surrounds us. Visual and hearing receptors carry thousands of messages into the mind everyday. The lifestyle of the individual at home and at work affects him on physical, mental and emotional levels. For example, you can make someone blush just with one word. Scaring someone will make the heartbeat faster. The ability of psychological influence on an individual or a group of people comes from individual mastery. Energy which is generated by the person is unseen, but the attacker can feel it. After the physical connection is made by copying the movements, it creates a bridge – which allows crossing over into the sub conscious giving one the ability to guide the attacker. 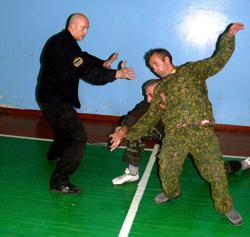 The main secret of Systema SpetsNaz No Contact Combat is an ability to blend in with an opponent unnoticed. The system of psycho-physiological control of an opponent is a complex process. Everything is important: the person who does it, an opponent, distance, body language and movement. Decisions must be made quickly. The brain needs 0.5-0.7 seconds to process the information. The energy is transferred during that time, otherwise the connection will be lost and you will need to start over from the beginning.

Another concept of No-Contact Combat is the use of verbal influence against an opponent like screaming or use of various sounds to create noise. This will shrink the consciousness and create feelings like stress, astonishment, fear and stupor. Unexpected signals affect the sensory part of the brain pressing down the fighting spirit of an attacker. The major goal is to make an opponent lose orientation and to lose control of his entire nervous system. 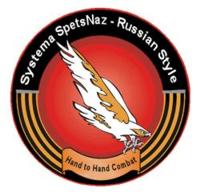 There is a lot that could be learned using this system, but it is more important to discover which natural abilities a person was born with, locate the source of your own energy and apply it to advance your fighting skills. Systema SpetsNaz “Russian Style” Combat is adoptable with other martial art styles – widening the knowledge of new principles, techniques and applications, helping you to discover your own natural abilities so you can improve your fighting skills.