I absolutely adore children. Next to women I think that children are one of God’s best inventions. Infants, babies, toddlers and children; I love them all. Teenagers on the other hand… But that’s a thought for another time.

Every living creature progresses through stages in its life. Adulthood is reached over time. Maturity is a process. It doesn’t happen overnight. This rule isn’t just limited to human growth but is common in just about everything that progresses into a functional stage. The martial arts are no exception.

I am being inducted into the Museum of Sports Karate this month as a ‘History General’. What that implies is that I’m so old that I have been involved in the martial arts since the dark ages. Not actually but I have been involved in the arts long enough to see it grow into what it is now. Sometimes watching what unfolds before me I suspect that we’ve reached senility and we’re entering into our second childhood or maybe we are retarded in our growth and still acting like children when we should be adults. The Bible speaks of drinking (mother’s) milk when we should have progressed to eating meat. Unfortunately some of us are in a state of arrested development and we’re still acting like playground bullies. I’ve never seen so much pushing and shoving in my life. We’d do better if we’d go on and fight and get it over with. All of the growling, snarling and posturing is bordering on the asinine.

In spite of what I see I still have great hope and faith in the martial arts to become what it is capable of being. We should have left our childhood behind long ago. It’s time to grow up. 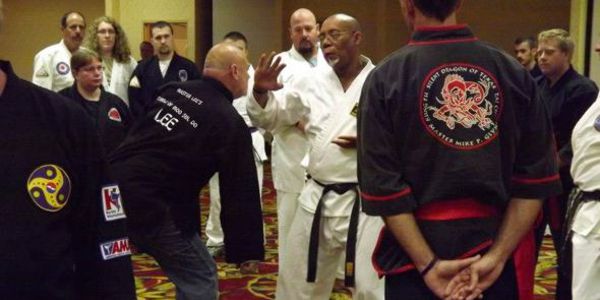 Regardless of what we may be told there are no big I’s or little U’s in the martial arts. There is no martial art aristocracy. We are martial artists. The martial arts are about fighting. We aren’t exactly dealing with brain surgery here. Never the less, the martial arts can accomplish amazing things if we allow it to grow out of its infancy and come of age.

Actually, all of us aren’t guilty of martial art retardation. Some of us are growing or have grown to maturity. Our primary focus is (or should be) self realization and the growth and inspiration of our students. Bickering and infighting will not accomplish this goal. If anything it will inhibit the arts from reaching their full potential and our students from reaching their goals. If children see nothing but arguing and fighting from their parents it is hard to expect much more from them. We’re deceiving ourselves if we act like children and think that our children will grow up to be responsible and sensible adults.

Growth is necessary if we are to survive. Children can’t take care of them themselves and they certainly can’t raise and take care of other children. Growth inspires growth. Intelligence breeds intelligence. Our children garner their inspiration and get their guidance from us.

I am a member of the Black Dragon Fighting Society. I’ve been involved in it since its inception. I’m one of the patriarchs of the organization and one of its senior grandmasters. I saw it in its wildest days. Its adolescence was something to behold. We were a wild bunch back then. We were born in controversy and we continued in the same for a number of years. Like all things, however, we went through a gradual change. We grew out of our childhood into adulthood. As most teens will, we grew out of that wild stage and have become mature and functional adults. Unfortunately our past has worked against us. The rejection of the past that made us much of what we were then still continues till this day. The Black Dragon Fighting Society has come of age, but we are still ostracized by many. 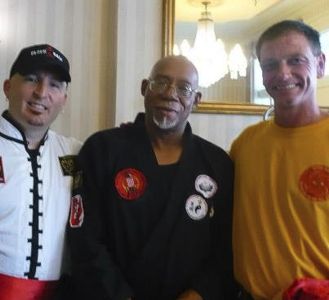 In the legal system a minor’s juvenile record is closed if not expunged when he reaches adulthood. What he did in his youth becomes a closed issue. In effect, his youth can’t be held against him in adulthood. Children grow up. The apostle Paul said, “When I was a child, I spoke as a child, I understood as a child, I thought as a child but when I became a man I put away childish things. (1ST Corinthians 13:11)” We have, in effect grown up. We have become mature adults.

I have been blessed to see this transition. I have lived to see this historical organization grow out of its infancy, through its adolescence to where it is now. The culmination of this transition was so wonderfully demonstrated this past weekend (Oct. 5-7). We had our reunion seminar conference in Lexington Kentucky. The attendance was great and the air of camaraderie and brotherhood permeated place where it was held. There were individuals from many schools, systems and organizations. Even other countries were represented. With the mixture of styles, races, religions, creeds, colors genders and nationalities there wasn’t a hint of dissension or politics. Everyone was about sharing and learning as much as possible in the time allotted. Every seminar was well attended and well received. No-one was criticized or ill spoken of. I have never seen anything like it in my fifty five years in the martial arts. I was proud to say that I am a Dragon. I don’t think that anyone went away feeling short changed or disappointed. The whole thing was a great success. The high point of the convention was the ceremony recognizing the veterans in attendance and honoring our fallen and lost comrades at arms. It was beautifully done. It was recognized by the governor of the state (Kentucky), a senator and mayor. It was wonderful to see and be a part of. As a veteran I truly felt that my contribution was appreciated. Many of us who served in the Viet Nam conflict have long awaited such recognition. For those present, wherever they served, they were reminded that their service meant something to our people and our country.

I love the martial arts. I approach it with acceptance and tolerance of other styles, organizations and systems. We each practice at our own level for our own purposes but the important thing is that we all practice and we are all martial artists. We are a fraternity; a brotherhood. We embrace different ideas and philosophies but we are brothers never the less. It would be wonderful if we acted as such. We are past the point where we should be acting like spoiled children. We should act as an example to the rest of society. After all, as martial artists we are held to a higher standard.

Father’s Day Thoughts: What He Taught Me Paid Off