Independent Vision and Production (INVISION PRO) proudly presents the documentary:
Karate in Ontario THE UPHILL BATTLE ‘The Cost of Raising a Champion’

THE UPHILL BATTLE is an award-winning documentary directed by Maria Morgunova. “During production of the documentary I was fortunate to interview amazing coaches, athletes, parents, and referees… I realized at once that we have a huge Olympic potential here in Ontario. In my opinion, the government should wake up and take notice, and support these brilliant athletes and coaches, especially now that karate has been officially added to the Olympic Games,” – Maria Morgunova in an interview with the National Association of the Film Critique(USA).

This documentary is for anyone who interested in the different aspects of karate including parents, sports scientists, college and university-level students, gym teachers, athletes, healthy lifestyle experts and instructors, coaches, sports-oriented teenagers and karate officials at every level.

It attracts parents because it provides an avenue for them to help their children develop winning life-skills; overcome bullying in schools, develop confidence; learn how to think for themselves; and achieve positive outcomes in every aspect of their lives.

Lifestyle-oriented people like it, because karate is all about the self. It helps in self-improvement, self-development, self-defence, self-control and self-growth.

Sports experts, sports psychologists, gym teachers, sociologists, and school teachers choose to share this documentary with their students because, not only does it instruct them on how to teach different age groups, it also discusses historical facts, traditions, styles of karate, and much more.

The documentary is the first study and only known research about karate in Canada.

Currently, there is no centralized open-source of information about karate in Canada or any statistics about different types of events related to the sport. To this day, no official data exists on the number of clubs, coaches, and students in Canada. This film demonstrates the urgency for an official study on the state of this sport in Canada. The development of the karate industry is dependent upon this research.

The Uphill Battle (2018) got great reviews on Amazon (“verified purchased”), IMDB, Rotten Tomatoes and sport oriented online resources. Read what karate experts have to say about the subject:

Kyoshi Sam Moledzki, Karatedo Shitokai Canada Shihan-WSKF: “This insightful documentary gives the viewer a behind-the-scenes look at karate in Ontario. Many topics are covered, and anyone interested in the sport will discover something unique and important.” Sensei Louis Rossi: “Fantastic Documentary. Good choice of dojos that presented the message; respectable, qualified instructors are featured.”

Oleg Morgunov, Toronto Karate Junior League Tournaments Director: “One can’t underestimate the impact of this film. After The Uphill Battle was released in Sep. 2016, karate’s position as a sport in Ontario changed dramatically. The former Provincial Sport Organization lost its governing body status; the higher-ups who impeded the development of karate were dismissed, and the sport gained new momentum!”

Paul Dupre, martial arts aficionado and historian: “Tremendous presentation and amazing coaches and judges that are interviewed in the film!”

About the Filmmaker
The documentary was directed by Maria Morgunova, Director of INVISION PRO, a media company in Toronto, Ontario. Maria’s background includes over 10 years of experience in journalism and the film and video industry as a videographer, journalist, film editor, short story producer, and TV talk show director. Maria holds an MA and has created successful stories and programs for the corporate world, broadcast television, and PR companies.

Karate in Ontario: “The Uphill Battle”: The Cost of Raising a Champion 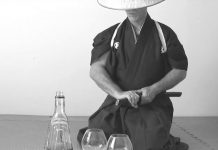