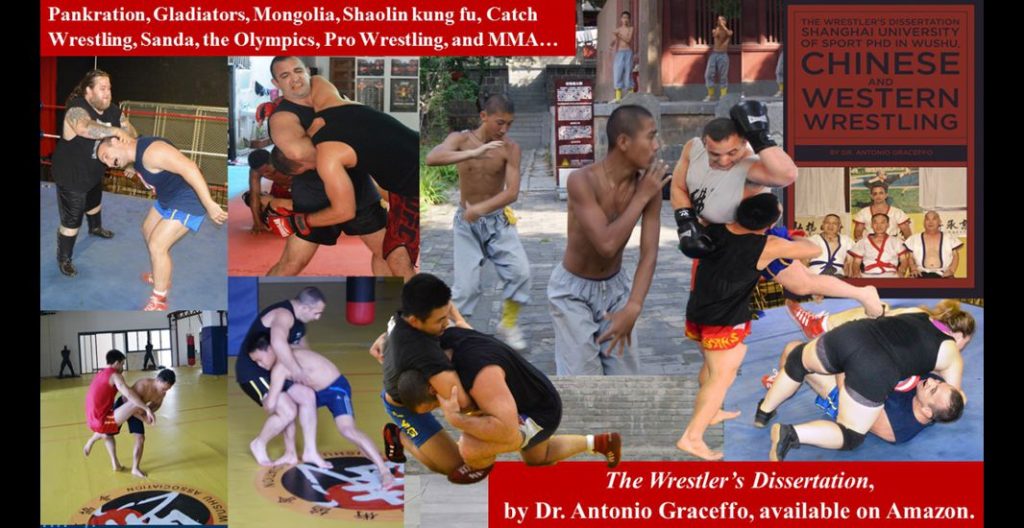 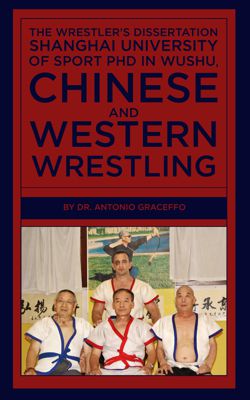 The Wrestler’s Dissertation: Wushu, Chinese and Western Wrestling traces the history and evolution of Western wrestling, from Ancient Greece, to Catch wrestling champion Frank Gotch, and on to Gorgeous George, Hulkamania, and UFC champion Daniel Cormier. During the same time, across the Pacific, China was transforming itself from a loose collection of warring kingdoms to a modern nation state. Behind The Great Wall, Chinese shuai jiao wrestling was growing out of countless regional and ethnic wrestling styles from Mongolia, Manchuria, and Korea. The Shaolin Temple was also incorporating Chinese wrestling techniques into wushu forms, and eventually sanda (kick boxing). In the last twenty years, Chinese wrestling has collided with Western wrestling in the Olympics, MMA, and now pro wrestling. This book explores the similarities and differences between western and Chinese wrestling from a cultural, historical and technical standpoint and seeks to understand why western wrestling is so much more aggressive, competitive, and violent.

In 2013, Martial arts author and traveler Antonio Graceffo was awarded a PhD scholarship to Shanghai University of Sport (SUS). His major was Chinese wushu and his dissertation title was “A Cross Cultural Comparison of Chinese and Western Wrestling.” The entire three-year course was taught in Chinese, during which time, Antonio conducted both academic and field research, training with the wrestling team, learning Chinese traditional shuai jiao wrestling, as well as Greco Roman and freestyle wrestling. At SUS, he cross-trained in Chinese sanda and Japanese judo. He also trained freestyle in Cambodia, san da in Vietnam, catch wrestling in Singapore, and professional wrestling in New York. After graduating in 2016, he set about translating his dissertation into English. In Antonio’s own words, “A standard PhD dissertation is a dry, academic affair with all of the life sucked out of it.” This book, however, is not the actual dissertation. It is an English language version with all of the interesting bits put back in.

Antonio Graceffo PhD China-MBA, works as an economics researcher and university professor in China. He holds a PhD from Shanghai University of Sport Wushu Department where he wrote his dissertation “A Cross Cultural Comparison of Chinese and Western Wrestling” in Chinese. He is the author of 8 books, including Warrior Odyssey and The Monk from Brooklyn. His regular column, Destinations, has been running in Black Belt Magazine since 2009. He has fought professionally as a boxer and MMA fighter as well as fighting as an amateur in boxing, sanda, and wrestling. Having spent over 15 years studying martial arts in Asia, he holds black belts in Cambodian Bokator, Filipino Kuntaw and Cambodian traditional kick boxing. In Malaysia, he was the first non-Malay to be awarded the title of Pahlawan Kalam (warrior of Silat Kalam). Currently, he is pursuing a second PhD in economics at Shanghai University, specializing in US-China Trade, China’s Belt and Road Initiative, and Trump-China economics. His China economic reports are featured regularly in The Foreign Policy Journal and published in Chinese at The Shanghai Institute of American Studies, a Chinese government think tank.

Review
The grapplers bible has arrived!

1st Tang Soo Do Seoul Forum: Technology and Transparency in the...