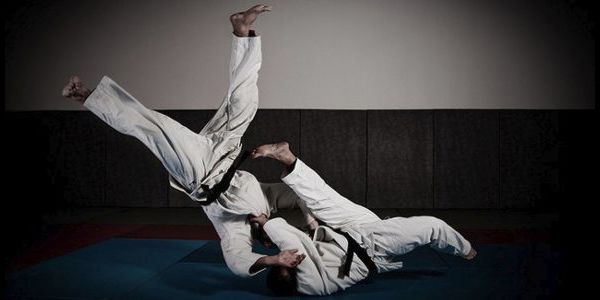 Anyone who has ever seen an old west fistfight staged for a movie or TV series has probably seen a scene in which one character falls to his back and then somersaults an opponent over his head, using a leg and foot to do so. Anyone who has ever studied Judo knows this throw as “Tomoe Nage”, or the “Somersault Throw”. Possibly no other martial arts technique has ever been so well known in the western world as Tomoe Nage. Even if people do not know the throw’s proper name, they know the throw. It is a staple of almost every fight scene ever recorded on film.

Funny how some things from one culture filter their way into another culture until sometimes the lines become blurred where their origins begin and end. Tomoe Nage is such a phenomenon. Most people in the west probably have no idea when they see this technique performed that it has eastern roots. Nor do they necessarily care.

But as martial artists, WE care. We want the world to know that this is another thing we have given to it. Bequeathed to it. Bestowed on it. That it has its roots in OUR systems of fighting and self defense. We care about this not out of ego, but because we believe in the martial arts for both fitness and self-defense. In a world growing increasingly dangerous, we want as many people as possible to learn how to effectively protect themselves and their loved ones. Especially to learn how to do this when otherwise unarmed except with the skills which only the martial arts can provide.

In our culture today, so many martial arts moves are seen by millions of people everyday. Many of these people have no real idea what they are watching or where it comes from. Pro wrestling uses martial arts moves and techniques on a frequent basis, including the ever-popular somersault throw. Whenever a wrestler falls, he or she usually employs a ukemi, or “break-fall” technique, often so well camouflaged that the average viewer fails to see it. Hip tosses (O-Goshi) are commonplace. So, too, are all manner of “chops” and thrusts and kicks. But perhaps nothing is more ubiquitous, in film, television, Pro wrestling or anywhere else, as is the somersault throw. Gene Autry did it. Roy Rogers did it. Audie Murphy did it. Lou Thesz did it. “Matt Dillon” did it. “Xena, Warrior Princess” did it. I walked out my front door one night last summer and two young men were taking turns executing this throw on each other. Turns out they are local stuntmen and were rehearsing for a fight scene in a movie production to have been filmed the next day. When I asked them if they knew what that throw is called, they had no clue. Yet they were executing it pretty well.

And so we see, in this throw, an everyday example of how the martial arts have so saturated our culture that many people often can execute, or at least recognize, some of the techniques from those arts without even knowing their roots are in the arts. And maybe that means we need to be doing a better job of getting the word out. That is, IF we want the martial arts to continue to flourish and to play a role in the fitness and protection of people all over the world.

We are all walking, breathing, living commercials for the martial arts. Let’s BE that the very best we can.

Ibrahim Janjua: The Making of a Champion