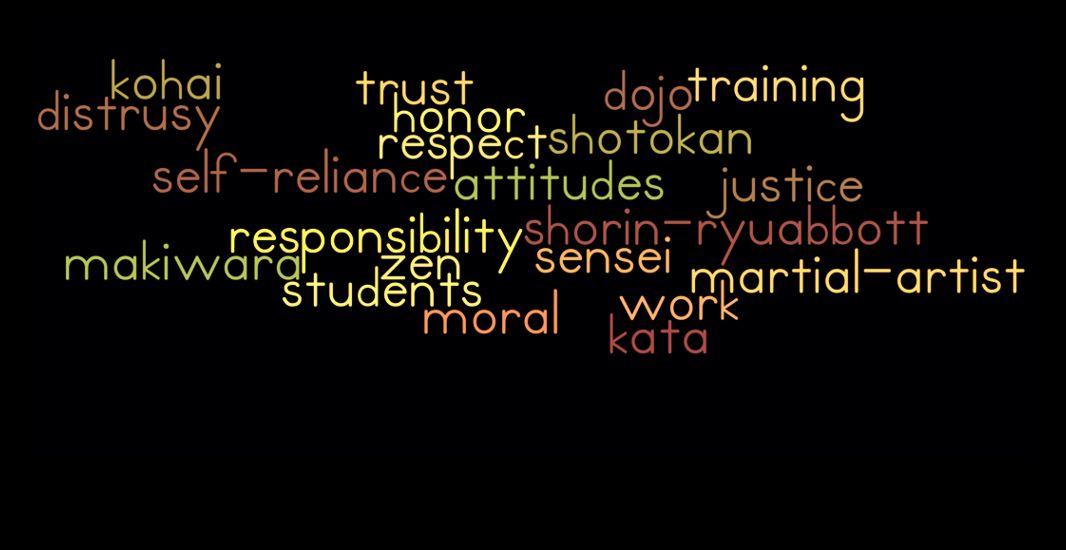 What are some of the key mind sets and attitudes to be found in advanced martial artists?

“What you do speaks so loudly that I cannot hear what you say.”

Responsibility
The answer to that question for me comes from the examples I’ve had during my own journey. Influences started with a teacher in the Philippines, Sensei Marcello Umipeg, then my Okinawan teacher, Sensei Kanei Katsuyoshi. Then my Sensei for 46 years, Sensei Chinen Teruo. Other influences include Sensei Higaonna Morio, and Sensei Miyasato Eichi. Much of my ideas on this were formed simply by observing these great teachers. There is an old saying that “what you do speaks so loudly that I cannot hear what you say.” These gentlemen spoke clearly and well with their actions, and their actions always matched their words. In addition to learning through observation, I also had some wonderful opportunities to have long and meaningful discussions on a wide variety of topics.

Karate is very much an individual activity. We may train in a group, but that isn’t a necessity once a person has gained some knowledge. One can simply find a small flat spot and do kata with intensity for hours. One can face the makiwara and train hard completely on their own. And when a practitioner steps into the ring to face an opponent, it is a moment of existential aloneness. No one will come to his rescue if he is losing.

Along with individualism, comes individual, personal responsibility for the outcome of our actions. Once, having the only viable vehicle for a longish trip, I drove Sensei Chinen and three of the other young yundansha to a tournament in Eugene Oregon. The tournament was a Shotokan tournament, and Sensei Hidetaka Nishiyama was there. I owned his book, so it was quite a thing for me at the time to actually meet him. In any case, this was early (the first, actually) in my tournament career under Sensei Chinen’s coaching, and I, along with the other guys, did very poorly. We were all defeated soundly in short order.

It was a bit of a quiet ride home. But at one point, one of us said something like “I’m just not fast enough.” Another chimed in with “my timing isn’t good enough.” This kind of talk went on for about 2 to 3 minutes, till Sensei had heard enough. “Those things are not the reason you lost. You still see yourselves the way you used to be. The younger students at the dojo see you as you are, and are very impressed with you. I see you the way you will become. When you see yourselves the way I see you, you will win tournaments.” Turned out to be exactly correct.

After a bit longer, one of the guys in the back seat, a Shorin-Ryu “orphan” who had been training with us for over a year started complaining about how the referee in his fight was terrible, and how he had scored on this his opponent numerous times and the referee completely ignored his scoring. Sensei put on his “angry Sensei” voice, and said, “Not referee problem! It is a “YOU” problem. Referee not responsible for your performance, YOU are! You must train so hard that even a blind referee will call your points! YOU are responsible for your winning or losing, not referee.”

As I drove along, quietly thinking about Sensei’s words, I recalled a conversation I’d had with my first teacher, when I was still only 18. He’d said, “one of the most important things you must understand if you are to have a good life, is that you, and you alone, are 100% responsible for the results you get from your life.” I remembered thinking that that was an incredible burden. And I remembered the somewhat amazing discovery that it wasn’t a burden…. It was freedom!

Work
There is a famous Zen story about the Abbott at a monastery. He was beloved by all of the younger monks, who recognized his great wisdom. He was in his 90s, and growing frail, but never failed to rise before dawn, and with the coming of the sun, go to the garden to work. He’d work in the garden for many hours. The younger monks became concerned for him, and asked him to please stop working so hard. He smiled, and kept on with his daily practice. Finally, the younger students decided that if they hid his tools, it would force him to rest. So the next morning, the Abbott rose as usual. He went to get his tools, and discovered them to be missing. He looked both concerned and disappointed, but went back to his quarters. The younger monks noted that he did not eat that day. The next morning was the same. Again, he did not eat. So they went to him with great concern, and said “master, you must eat!” His reply was, “I cannot eat if I do not work. Work is nutrition for the soul, just as food is nutrition for the body.” His tools were returned.
Training in Karate is not a path for the lazy. Under a good teacher, a student can expect to do massive amounts of conditioning… pushups, bunny hops, ab exercises, running, and of course thousands of repetitions of basics and kata. Junbi undo, hojo undo, kigo undo all produce sweat. The acquisition of every new skill requires a prodigious amount of simple hard work. There is no magic.

When Sensei Chinen purchased his home back in the ‘70s, it sat at the top of a lot that sloped dramatically toward the street. Sensei decided that it needed to be terraced to make for a good garden. He hand dug, and hauled well over 1,000 wheelbarrows full of dirt. When, after many months of intense labor, he was finished, his yard was beautifully terraced. And that was just the beginning. His yard became an incredible Japanese style garden, thanks to his incredible work ethic.

Respect
Why do we bow as we enter the Dojo? Why do we bow to our teachers, and the teachers to the students? Why do we bow to each other prior to a two person exercise? We bow to show respect. It also demonstrates humility. It is a basis for self-defense. Showing respect at all times inside the Dojo builds a habit that carries outside the Dojo. So as we interact with people away from the Dojo, our habit is to show them respect as well. Showing respect to others is a great way of avoiding unnecessary conflict. There are some sub-cultures that are “honor” cultures… If someone from that type of culture feels that you’ve dishonored them, they believe that they are entitled to kill you for having dishonored them. There is a secondary benefit from showing respect… after a time, doing so helps us learn to respect OURSELVES.

Respect should be a default position whenever we meet a person for the first time. Can that position change? Of course. If you meet a really fantastic person, they can earn even more respect. If, on the other hand, you meet someone who is not so nice, they can earn your disrespect. Now as to your self respect… can you earn more? Yes of course. Being a kind person, being a hard worker, being honest and forthright, being responsible, will all add to your self-respect. On the other side, any time we do things that we know to be wrong, our self-respect can diminish. I caution my students “observe carefully the differences in the lives of people who respect themselves, and the people who don’t. Your self-respect is precious. Be very careful with it.”

An interesting thing about people with high levels of self-respect and a default position of respecting others is that they tend to be very tolerant of the differences between individuals. Someone doesn’t believe what you believe? That doesn’t necessarily make them an enemy, as long as their belief doesn’t involve harming others. Someone has a different lifestyle? So what? Are they otherwise a decent human being? If so, fine.

Trust
Trust is very like respect. You can start with a default position of trusting others. They can earn a greater level of trust, or earn distrust. That will be a decision that they will make. You won’t be able to change it. What you can change is your own trustworthiness. Never let that fail.

Most martial artists believe that an enduring moral code exists, that human nature is constant, and moral truths are permanent. Advanced practitioners tend to have an adherence to custom and convention, understanding that customs enable people to live together peaceably. (Consider the conventions of courtesy and respect.)
The development over time of the deeper understanding of the core of martial arts training gives advanced martial artists the ability to keep powers and passions under constraint

Self-reliance
It is of course self-evident that no one else can do your pushups for you to make you stronger. No one else can do your thousands of repetitions of basics for you to make your skills better. Martial artists learn early that we must rely on our own efforts if we are to hone our skills. That understanding of self-reliance seeps out into the rest of a martial artist’s life as well. It goes back to responsibility. We take responsibility for ourselves. 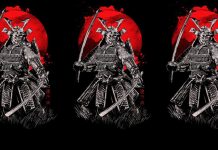 Mental Kung Fu: Use Your Mind