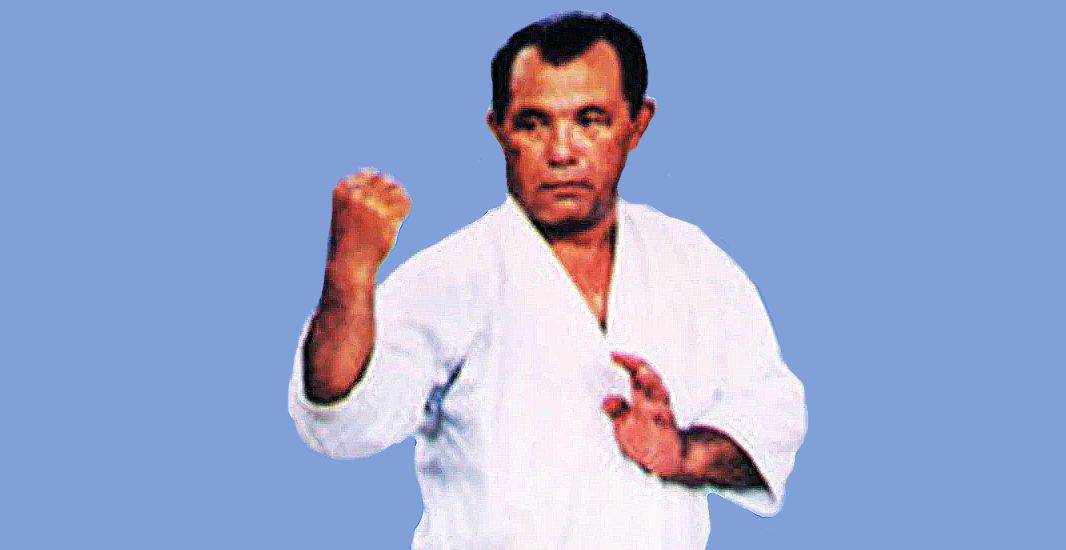 Eiichi Miyazato (1922-1999) was a leading Okinawan master of Goju-ryu karate. He was a senior post-war student of Chojun Miyagi, founder of the Goju-ryu style. Miyazato held the rank of 10th dan in karate and 7th dan in judo; on his death, he was honored with the degree of 8th dan in judo.

Eiichi Miyasato began training in Matsuo, Naha City with Chojun Miyagi sensei when he was 17. He became an assistant to Chojun Miyagi sensei and also joined the Ryukyu Police Department in 1946 on Miyagi’s recommendation. He became a physical education instructor at the police academy and assisted Miyagi (already an instructor at the academy), teaching karate and judo. After Miyagi’s death in 1953, Miyazato inherited his  training equipment and he took up the position of teaching at the Garden dojo, which had been Miyagi’s dojo.

After the death of Miyagi in 1953, Miyasato maintained the garden at Miyagi sensei’s residence and instructed the disciples of Miyagi. He was officially recognized as the successor to Chojun Miyagi sensei in April 1954, at the general meeting of the then Okinawa Goju-kai.

After Miyagi’s death (1953), his family communicated that Miyagi, the founder of the style, wanted Eiichi Miyazato to succeed him. The Goju Ryu committee (formed by its major students) at a meeting in February 1954 voted almost unanimously Eiichi Myzato as the official successor to Chojun Miyagi.

In 1972, he retired from the police force and devoted the rest of his life to teaching karate.

Eiichi Miyazato passed away on December 11, 1999 in Naha hospital. Miyazato’s dojo is currently run by his son, Yoshihiro Miyazato.

USAdojo - November 26, 1999
We use cookies to ensure that we give you the best experience on our website. If you continue to use this site we will assume that you are happy with it.OkRead more