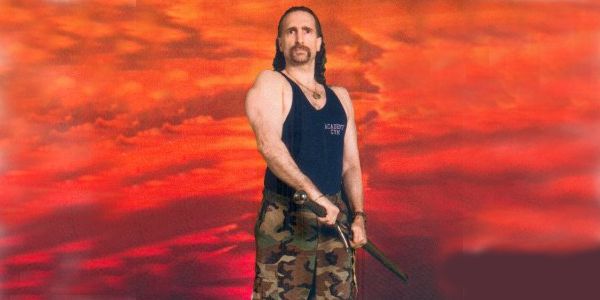 Ever since man first picked up a rock for self-defense he has been on a never-ending quest to improve the weapons at his disposal. No where was the evolution of these tools for combat more profound than on the island of Okinawa 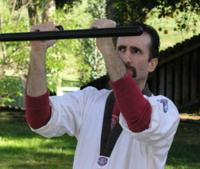 One such weapon was the tonfa, originally used for thrashing grain; it was also used for self-defense. The tonfa proved to a very effective weapon when fighting someone armed with a bo, staff, and even a sword. It was also excellent for striking, joint locks, and chokes.

In the early 70’s the tonfa was redesigned and subsequently became the non-lethal weapon of choice to police departments around the world. Known by cops as a PR 24, this distance cousin to the tonfa rapidly replaced the bully club and nightstick carried by police.

It has been more than 4 decades since anyone has effectively improved on the PR 24. As we nudge another year into the 21st Century Martial Arts Master Robert David Margolin has put a new spin on an old weapon.

“The PR 24 is a weapon that was badly outdated and in dire need of a facelift,” said Margolin. “My weapon is the D.L.D. which stands for Defensive Leverage Device. I believe the most important difference between my weapon and the PR 24 is that my weapon opens up into a two handed position which affords the officer greater protection by going across the body.

The idea for this new device came to Margolin while he was teaching a karate class and noticed one of his students, a police officer, was nursing a bad shoulder injury. She suffered a shoulder separation while training with the PR 24 at the Police Academy. After questioning his student about the way she was being taught to use the baton he quickly realized that the weapon had several flaws that restricted the user from a perspective of biomechanics.

“The traditional PR 24 is an arcing weapon,” Margolin said. “As with any ‘arcing’ weapon the PR 24 is basically used like a baseball bat. It doesn’t have ‘in tight’ leverage for the officer. For an arching weapon to be effective you’ve got to hit the attacker before they get inside your arch. The PR 24 is a one-dimensional weapon and it has very little value as a defensive weapon. My D.L.D. is a ‘pushing’ weapon and as such gives the officer a much greater range of use, both offensively and defensively.”

Designing a new weapon requires a lot of time in the think tank and on the drawing board. A total perfectionist, Margolin approached the design of the D.L.D. with the same meticulous scrutiny that he used to hone his fighting skills: by dissecting every phase of his training regiment.

In addition to more than 40 years martial arts experience, Margolin was one of the nations’ most successful toy and video game designers. Drawing upon his skills in both arenas Margolin pondered the pros and cons of the PR 24 until he came up with a blue print for what he called, “the better mousetrap.” “When I got out of college I designed Break Out and Super Out,” Margolin said. “It was one of the best selling video games ever produced. So when I decided to redesign the PR 24 I just applied my design experience with my knowledge of martial arts which led to the creation of my Defensive Leverage Device.”

One of the innovations Margolin came up with was a spring-activated push rod that quickly activates a second movable handle. However like many good ideas, finding a way to make them works is a matter of trial and error, and so it was with the spring activated push rod. After more than a year of designing and redesigning, the weapon still wouldn’t work to Margolin’s satisfaction.

“Finally I hired two Boeing Space Engineers and they determined that we should be using a device known as a pull spring,” Margolian said. “It not only worked, but it worked amazingly well.

“While the PR has only one side handle, mine has two side handles,” said Margolin. “The pull spring is activated by pushing a button on the top handle, which activates a second moveable handle. This afford the officer with a number of options he doesn’t have with the PR 24.”

Margolin also says that the D.L.D. isn’t visually as intimidating as a PR 24, subsequently it can be used to deescalate a situation more effectively than its predecessor does. However, when push comes to shove, the D.L.D. will provide the officer with a greater variety of self-defense options.

“You can use the D.L.D. in a two handed position, like a chest push,” Margolin explains. “The second option is to use it to poke an aggressor, the third way it can be used is a power stroke. Because it’s spring loaded it comes up instantly which is very effective against an edged weapon.”

Unlike the PR 24 which hangs from a belt, the D.L.D. takes a lesson from the wild west when a fast draw was often the difference between a victory drink and a trip to Boot Hill.

“To begin with the D.L.D. is worn in a sling draw holster and because of the second handle it won’t bounce around on your hip or bounce out of the ring,” explained Margolin. “I’ve talked to many officers and they tell me the first thing they do is toss their nightstick when they get into a foot pursuit so it won’t get caught between their legs and cause them to fall. Because of the design of the handles and the unique holster that won’t happen with the D.L.D.”

The special pull spring also gives the officer a psychological edge on the suspect. The moment the second handle is activated it slams into place with a forbidding sound similar to that of a shotgun being primed.

“It’s a very intimidating sound,” says Margolin. “We not only designed the D.L.D. to be an effective offensive and defensive weapon, but it’s also designed to demoralize the bad guy.

One of the first individuals to use Margolin’s new toy was Detective Roy Burns, President of the San Bernadino County Sheriff’s Special Enforcement Bureau. With more than 32 years law enforcement experience, Burns was also the man who trained the Los Angeles Police Department, the Sheriff’s Department and SWAT in the use of the PR 24.

“Roy is definitely the ‘go to’ guy when it comes to baton training,” Margolin said. “He fell in love with the D.L.D.“

“I was very impressed with Rob’s design,” said Burns. “I’ve been a defensive tactics instructor for the Los Angeles County Sheriffs Department for many years now and I believe that this weapon would be a fine addition to the tools that any law enforcement agency uses. The D.L.D. provides us (police officers) with a greater range of self-defense applications than the PR 24. I believe it’s far better for self-defense, and to control suspects and it presents a weapon that can be used in a less obtrusive manner. By that I mean it gives us greater range for wrist locks and arm controls that aren’t available with the baton we’re currently using.”

According to Margolin and Burns the D.L.D. is a great tool for crowd control. “When the spring is activated one baton traverses to the other end of the baton giving you a handle at both ends of the baton,” explained Burns. “That makes it an excellent offensive weapon, defensive weapon and a great control weapon. You can hold it in front of you and have total control of the weapon unlike the PR 24 where you only have control of one end. So if somebody comes at you with a baseball bat you have a firm defensive weapon to protect yourself and it’s easy to strike with either hand.

If the bad guy has a knife the D.L.D. unique design once again comes into play. Unlike the PR 24, Margolin’s grip is tailored to protect the officer from a slashing thug.

“My weapon has a second handle that lines up on your wrist so you don’t get an ‘overswing’ which is really important when using it to high block a bat or edged weapon,” says Margolin. “If you are facing an edged weapon with the PR 24 you have to put your second hand on the main shaft. That puts your hand at risk to be stabbed or sliced. Gang members in prison practice ‘take away’ techniques against the PR 24. With my invention, the Defensive Leverage Device you always are gripping the strong side handle which protects the user from the blade and it’s almost impossible to snatch the D.L.D. from your grip.”

When using the D.L.D. for wrist locks, the second handle provides additional leverage making it easy for the officer to subdue the bad guy with a variety of ‘control’ locks and submission holds.

“When someone reaches for you, or grabs you just activate that second handle, it will compress which is perfect for wrist locks and arm bars.”

So far Margolin’s Defensive Leverage Device is getting rave reviews from police and martial artist alike. He is currently seeking a production partner, and with that secured I am sure that in the not too distant future the D.L.D. will join the ranks of police departments and dojos around the world.