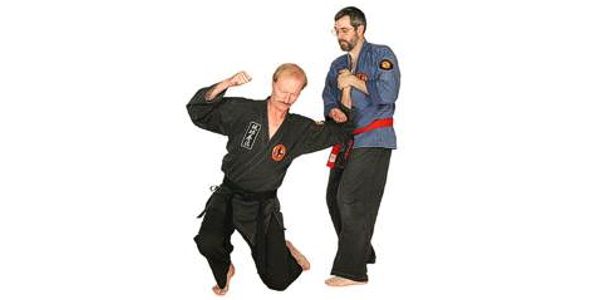 I was reading a military hand-to-hand (H2H) training manual, and recognized that the program had been influenced by the Filipino martial arts. One chapter covered the 12 angles of attack, showing the angles with knife, then fairly standard Filipino patterns for dealing with knife attacks bare-handed. The next chapter showed the 12 angles of attack with fixed bayonet. Then it showed defenses against those angles. But, here was the problem, the manual showed completely different ways of dealing with the bayonet than the methods for dealing with knife. In other words, they showed twelve angles of attack, and 24 different responses to attacks along those lines. And it got even worse. As I went through the book, I counted some 75 unique techniques. And this was supposed to be the basic military training manual.

Most training programs are developed in a similar fashion. They consist of handfuls of tricks and techniques designed to solve a variety of situations or attacks. So, the usual “basic” self-defense or H2H course consists 20 or so common self-defense scenarios, each with a unique solution. If your attacker does this you, do that; if your attacker does such, you do so. One solution to each scenario. I call this approach Single Scenario Tactical Solutions (SSTS). Of course, the trained martial artist usually has dozens of solutions to any given tactical scenario. That’s what competency is all about. However, when training non-martial artists in short term courses for self-defense or unarmed combat, this is a ridiculous approach.

Instead, the approach I advocate is to teach a simple curriculum that handles a variety of scenarios with the one basic skill set. This is called a Multiple Scenario Tactical Solution (MSTS). I teach this concept using a basic, four step action, which is then applied against a wide spectrum of attacks. I teach the basic sequence starting with a simple assault scenario, like a front choke. Then, I teach people to apply this same solution up against a wall, or in a chair, or on the ground. The next step is to apply this simple response against punches, varying grabs, even knife and gun assaults (depending on the group).

The specific curriculum I utilize I call Flux (for Flexible-Application Unarmed Combat Skill). It is easily adapted for a variety of different populations, from civilian to professional applications. And while the different populations require slightly different elements, the over-all concept and underlying principles are the same.

This is such a simple approach that many martial artists have a sense of discomfort when they see it. “Yeah, but what about XYZ techniques?” They wonder. Think of it this way – a maker of fine furniture has many tools which are only used in one single step in the process of making a piece. But, if I have a hammer, a saw, some nails and some lumber, I can make a table. It won’t be pretty, but it will hold up my dinner plate. In the same way, as martial artists we have many very elegant ways of dealing with different attacks. But, a woman who takes a self defense class doesn’t have the time to learn elegant solutions. She needs a couple of things that will work well-enough to use as her response to whatever comes her way.

And, of course, my simple four-step solutions to teaching self defense can’t solve every problem. But, I would rather teach something simple that can deal with 25 different problems, than teach 25 solutions which each can only deal with one problem.

Martial Arts Are About Survival

The Reality of Combat: Are You Combat Effective?