I’m a firm believer of growth and evolution. I’m not talking about the Darwinian concept of evolution but the evolution of growth and change in the world we live in. Society isn’t the same as it was a hundred years ago. We have learned and implemented a number of scientific discoveries and these discoveries have shaped our world. Some things are unchangeable. Those things are the foundation on which we build. What we build on those foundations is the question.

Doing something the same way because it has always been done that way may give a nod to tradition but is it realistic? There are religions that deny progress and still ride in horse drawn buggies. In the jet age they are a throw back to a tradition that the rest of the world has grown from. I don’t discount the value of tradition. As a pastor I’m often seen as old fashioned because I see the value and truth in some old values. That doesn’t mean that I choose to live in the past. Though I value the lessons taught by the past I live in the real world. In a sense I suppose I live in both worlds. I live in the present time while valuing the lessons of the past. You may ask what this has to do with the martial arts.

I believe in feeding the need. Human beings have grown larger and stronger and live longer because of modern nutrition. Science and new strides in horticulture and husbandry has given us more of what we need to grow stronger bodies and bigger brains. In the long run you are what you eat. The trick is to know what your requirements are and to ‘feed the need’.

Tradition drives many schools of martial arts. In many of these arts the practitioners do things the same way as the creators of the art that they practice in spite of the fact that the challenges and conditions that created those arts no longer exist. These individuals still train as if they are facing sword wielding samurai or attackers on horseback. That’s the equivalent of bringing the traditional knife to a gun fight. Many traditional martial artists are unsuccessful in real life combat because they are bringing nineteenth century technology to a twenty first century playing field. They’re in effect, racing a Corvette with a one horse carriage. Do I need to predict the outcome of such a challenge to you?

In our martial arts we need to reflect the traditions of our arts but face the reality of a twenty-first century world. We may embrace the philosophies of the samurai or the ninja but we need to face the reality that we are not feudal warriors. The effectiveness of modern fire arms pretty much makes the samurai’s katana obsolete for modern combat. As much as I love the sword arts I wouldn’t want to face an AK-47 with a samurai sword. No future in that.

While honoring our martial art predecessors and the ones who created and developed the traditional art let’s not get stuck in the past. Combat effectiveness is progressive. Probably the traditional arts would still address the challenges of an eighteenth century feudal world if it still existed but when was the last time you faced a sword wielding adversary? If we’re going to be combat effective in our arts we have to develop arts that address the challenges of the modern era. 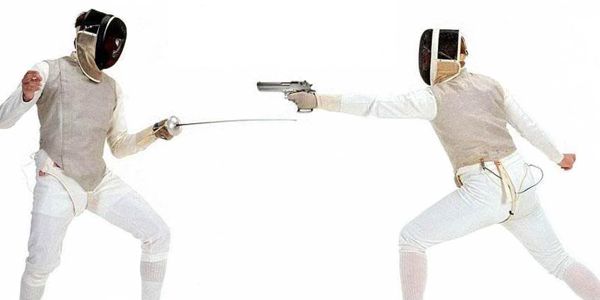 Shotokan karate is still shotokan karate whether we train to defend ourselves from muggers, strong-arm robbers, rapists or terrorists. Hopefully they won’t be wielding swords and spears. I can pretty much guarantee that very few of them will be on horseback.

I am thrilled when I see a karateka or a taekwondo practitioner take to the air and destroy those pesky boards. It takes strength, training and athleticism to accomplish such feats. It’s beautiful as long as we don’t mistake such techniques as real combat. Tobi geris (flying kicks) were designed to attack an opponent who’s on horseback. There’s nothing wrong with developing such skills. They challenge the skills of the young and give them an athletic outlet. There is value in sports and competition. Everything doesn’t have to translate as combat. However if we consider ourselves warriors we have to train accordingly. We tend to fight the way we train. If we are going to fight we have to train to fight.

If you want to know what’s effective in combat look at how our elite fighting forces train. Very few of them spend years perfecting a level of skill that will not address their needs in combat. They train for what they do and according to the challenges that they are most likely to face. Many of them are trained by seasoned martial artists who have spent years perfecting their craft but those who train these fighters don’t try to teach them a full system of a martial art.

We spend years studying and training in our various arts. From many of those arts have evolved more combat oriented systems. When we train in an art let’s keep in mind that we are studying an art. An art may include combat effectiveness but being an art it transcends this. We train realistically, hopefully, and we are combat able but we become much more. Anyone who believes that he has to spend thirty years of his life to become combat effective doesn’t understand the nature of combat.

The way I train my students probably more closely resemble the Filipino arts than the Japanese and Okinawan arts that I study. In kali, arnis and escrima weapons are taught before empty hand combat. That’s because theirs are fighting systems and as such they teach armed combat first. With the samurai jiu jitsu was never their primary system. Most samurai carried three blades. A katana, a wakazashi and a tanto. That is to say a long sword, a short sword and a knife. The weapon of preference was always their most formidable weapon. Jiu jitsu was taught to address the unlikely loss of all other weapons. Jiu jitsu was a last ditch effort not a first choice. In my system I teach self defense, combat and then the more esoteric aspects of the art in that order. As a modern martial artist with classical roots I teach some kobudo (traditional weapons) but I’m more likely to train my students in the use of knives and small arms. Not that I advocate solving disputes with such weapons but I believe in erring on the side of caution. I’d rather have a weapon and not need it than to need a weapon and not have it. If I’m facing a knife wielding opponent I’d rather have a knife and better yet (in some instances) a gun. If I have no option I’ll use my empty hands but as much as I advocate karate, the empty hand, I’d rather face such an opponent with a similar or superior weapon.

I have trained police officer, correctional officers, security and psych personnel. I don’t train them like I train my martial art students. I’m giving them a survival tool not an art. They aren’t interested in spiritual growth or self improvement. They are training for the reality of the confrontations that go along with their professions. If they join my formal classes I’ll teach them kata and waza but their time would be wasted with such training considering what they are training for.

What we teach should address the needs of those that we teach. There will always be a place for the traditional martial arts because there will always be people who enjoy the challenge of perfecting an art. However if we endeavor to teach a practical system of combat and self defense we have to address the realities of the times we live in. What we teach has to offer a solution to the challenges that people face in the real word. Give the people what they need in the modern world. This is the reality we’re faced with in an aggressive world. This is the real deal, not a game. We have to ‘feed the need’.

The Difference Between a ‘Do’ and a ‘Jitsu’