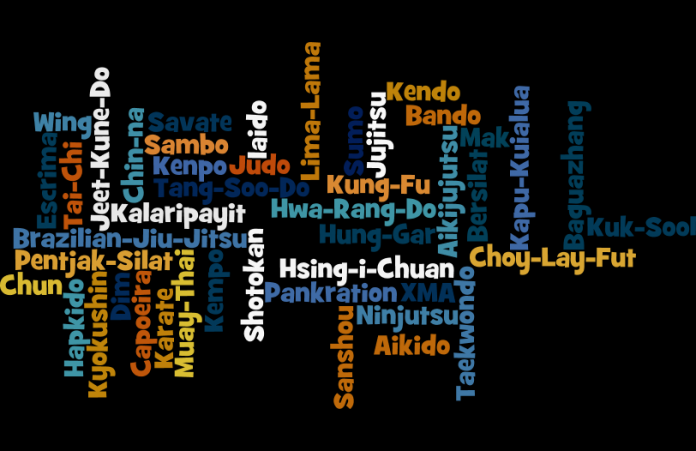 There are many ways in which martial arts styles can be divided. Here are a few “defining” terms used when discussing martial arts. Most Martial Arts are mixtures of these elements in various degrees. When we say a style is “hard”, we mean that the predominant expression of that style is hard. If we say Shotokan is linear, it does not mean Shotokan has no circular techniques.

Sport/Fighting Art/Exercise/Philosophy
These are not very goodl comparisons because people tend to be strongly opinionated on this matter. Most people want to think their art is an ancient “fighting art” that can be applied on the street. Some styles truly incorporate all four, and to some degree all styles contain all four elements. In discussions of a style it is most useful when people highlight which area or areas their style emphasizes.

Linear and Circular Movement
This distinction refers to lines of movement, lines of attack and lines of defense. “Circular” styles use circular movements to block, attack, or move, around and aside. “Linear” styles use direct, straight-on movements, attacks, or head-on blocks, in and out. Different styles can, and sometimes do, mix circular blocks with linear attacks. This is a subtle distinction and not absolute, but it helps to understand the difference.

Soft and Hard Styles
“Soft” styles tend to redirect energy, channeling and diverting momentum to unbalance an opponent, or to move them into striking range. They tend to be lower commitment and use less force. Thus, they are less likely to be unbalanced and can recover from redirection easier. Examples are Tai Chi, Aikido, Ninjutsu, or many Kung Fu styles and sub-styles.

“Hard” styles tend to direct energy outward and meet energy with energy. They will tend to strike more, and deliver more force with each strike. Hard stylists will often damage with their blocks, turning them into attacks. They deliver more power, and thus are harder to turn aside, but they are higher commitment, and thus don’t recover as well from mistakes.
Examples are Karate, Tae-Kwon-Do, Muay Thai, and some Kung Fu styles and sub-styles.

Internal and External Styles
“Internal” styles are styles that emphasize the more non-tangible elements of the arts. They utilize chi/ki/qi flow, rooting, and those elements which some people consider “mystical”. They tend to emphasize meditation, body control, perception, mind control, and pressure points. `Typically’ internal styles are soft. Tai Chi is an internal style. “External” styles tend to emphasize body mechanics, leverage, and applied force. They tend to use weight, strength, positioning, and anatomy to optimal advantage. Typically, external styles are hard. Tae-Kwon-Do is an external style.

Is Any One Art Complete?
The term “complete art” is applied to arts that include strikes, kicks, throws, pressure points, and joint locks. The arts most often mentioned in this regard are some Kung Fu styles, Jujutsu, and Hapkido. Although some arts contain more techniques than others, no art is “complete” in the sense that it includes all the important techniques from other arts. In general, every art has its strong and weak points, and each has something to offer to the lexicon of martial arts techniques.

Who are the most unhappy people? asks Shihan Mikio Nishiuchi

Ronald Shively - November 23, 2013
We use cookies to ensure that we give you the best experience on our website. If you continue to use this site we will assume that you are happy with it.OkRead more