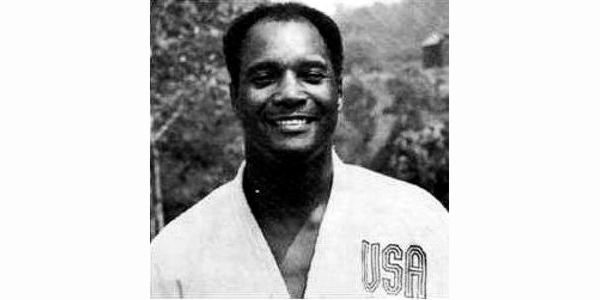 We all have our heroes in judo, men we hold in awe. George Harris is one of my heroes.

Mr. George Harris was on the first judo Olympic Team in 1964. He was a gold medalist in the Pan American Games (precursor to the World Championships) in 1960 and 1963. George Harris was a four time National Champion and six times Air Force Champion. Our two-part interview on judo and honor took place in 2000.

Q: How did you get started in judo?
George Harris: I had been an amateur boxer from the age of 12, all through high school.
In 1952 the Korean War was ongoing. All of my high school friends had been killed or were missing in action. I joined the Air Force and after basic training, I requested a transfer as far away from home (Philadelphia) as possible without leaving the country. The Air Force sent me to Travis Air Force Base in California for medical combat training. A patient of mine told me that he played judo when he wasn’t flying and offered to show me after he was discharged. That patient was Phil Porter.

Q: How did playing judo become a part of your Air Force responsibilities?
Harris: When I won the National Championships in 1957 and ’58 the military noticed. The Air Force moved me from medic responsibilities to the physical fitness unit. I learned judo, karate, aikido and ju jitsu. My job was to keep Air Force flying personnel in shape. In the Strategic Air Command we taught the bombers hand-to-hand combat. If the pilots went down behind enemy lines they could fight their way free and return back to their own lines.

Q: How did the Air Force train their competitors?
Harris: Every year for 10 years I spent 4 to 8 months in Japan training at the Kodakan. The Air Force would send over 26 men at a time. I was always tired and sore from being beat up. The Japanese were curious – they had not seen a black man before. It was interesting to see their reaction. They wanted to see if the black would rub off. I competed in the Air Force until there was no one left to beat. The Air Force sent me all over Europe and South America competing when I wasn’t in Japan training.

Q: What sacrifices did you make to become an Olympian?
Harris: I retired at a lower rank due to the constant judo travel and training demands. I missed out on promotions. I used to regret my slower advancement and lower rank than my peers. But I had to decide – what was my priority? It was to travel, train and focus on the Olympics. It made me a better person, gave me insight on life and people. Now, I would not trade those experiences for any amount of money. I met outstanding people.

Q: Many people have heard there was a comic book written about your life, but have never seen a copy. Whatever happened to it?
Harris: After I retired from the Air Force in the 1980s, I lived in New York. A young man in my judo class was a writer. He thought I had led an interesting life. He wrote the story of my life in comic book form. But after the comic book was completed, he stashed the copies away in his mother’s basement and moved away to Oklahoma. I went over and retrieved several copies. I don’t know what happened to the rest.

Q: For a time you were a television celebrity?
Harris: Yes, I appeared on talk shows and was twice a guest on “To Tell the Truth”. But as an amateur athlete I could not violate my status by accepting any money.

Q: And you starred in a judo movie?
Harris: Yes, the first and only judo movie ever made was a predecessor of the Karate Kid. It was called The Year of the Gentle Tiger, and was later shown as a NBC daytime program. The movie was shot in Westchester, New York and some footage was shot at Senior Nationals that year. NBC later sold the film.

Q: After retiring from the Air Force you faced some ethical challenges in the private sector?
Harris: In my second career, I traveled around the world teaching contract negotiation. I was offered money, bribes and sometimes was threatened by the men I had to evaluate. I used to have a boss who like to scream and yell at the men, call them names. I refused to be browbeaten. I would say, “I understand English. I hear very well.”

At another job, I refused to take kickbacks for pallet use. I could buy pallets from Ohio and Virginia by the truckload for $4.00 each. In NYC they cost $15.00 each with the kickback. If you don’t have good ethics, someone will lead you astray. The company fired me, replaced with a kid who made a lower salary, a kid I had trained for a year. When I was fired he didn’t even look up from his desk. He later stole $60,000 from the company. That young man didn’t get the training he needed in his home life.

I always thought I had a guardian angel looking after me. People have always helped me through times that were tough. You can’t go through life doing it all on your own – someone or something is looking out for you. Every day at lunch I would work out to keep in shape. When I went back to the office, I was fit and full of energy, ready to work. My co-workers came back sleepy from eating a big lunch

Q: Of all the athletes you’ve trained, who stands out in your mind?
Harris: AnnMarie was a ten year old girl in my judo class back in the early 1970s. Twenty years later she called me. She and her brother had been trying to find me for years. She had a child with a physical disability. She said, “You have been an inspiration to me and my brother for 20 years. Whenever times are tough, I think, what would sensei do, what would sensei say? He would never give up.” She wanted to thank me for giving her a creed to live her life by. I was crying; I couldn’t wait to hang up the phone so I could really sob. You never know the impact you have on people’s lives.

Q: You’ve had some health problems lately.
Harris: In the past year I’ve had a back operation, a heart attack, stroke and now I’m fighting prostate cancer. I’ve been through a lot but my faith in God pulled me through. I don’t smoke, I drink very little and exercise every day. All of the men in my family, my father and uncles died by the age of 50. I’m 67 and I’m still here, still working out and still in good condition.

Everything that happens in life shapes your values and whether you’ll be an honorable person. I’ve raised my three girls, all college graduates. I’ve tried to be a good person, to touch other people’s lives, to impact them to live honorably. Lying in that hospital bed, I made my peace with my Maker. I am not afraid to die.

By Rebecca Bernett as published in Masters, Judo for Adults.