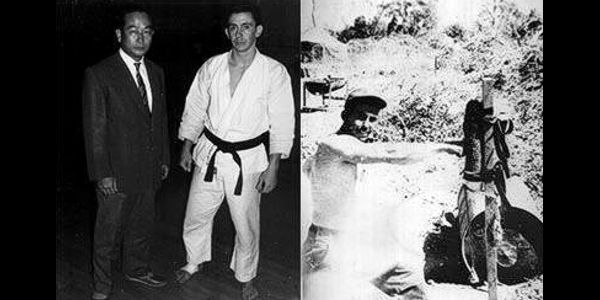 Gary Frriederich is a frail man who could pass as Burgess Meredith around the time of Rocky movies. He’s 56 years old, 5’6″ and 145 pounds. You notice his crooked nose but your attention is quickly directed to what appears to be arthritic hands. In fact, his knees, wrists and ankles all appear arthritic. Actually, he doesn’t know what caused it, despite being checked by doctors from around the world. All he know is he picked it up while in Vietnam and it’s painful. “I was tall, I was good-looking and I was smart, I’m none of those now.” There’s one other thing, he could probably kick your butt.

Gary Friederich, owner of Nevada Karate Association in Sparks, is still lightning quick, so much so that he can throw a punch at you and stop it an inch from your mid-section without your knowledge. Friederich is serving as commissioner for the Traditional Karate competition at the Silver State Games this weekend in Sparks.

Traditional Karate, of Japanese origin, is one of three martial arts disciplines being featured at the third annual Silver State Games this year. The others are American Points Karate and Taekwondo, which is of Korean Origin. To the casual observer, those three disciplines being fought out at Reed High gym is no cause for notice . The commissioners of the sports however, know differently. “Normally, this would never have taken place,” said Leonard Clark , the Taekwondo commissioner and owner of Reno Taekwondo center. It’s a credit to (Silver State Games President) Jim (Vanden Heuvel) for putting this together “.It’s not that there’s any animosity among the practitioners. It’s just that there is a definite pride factor in each discipline, a small amount of ” my sports better than your sport.”No hard feelings intended. “No way,” was all Charles Glass said when asked if he would ever consider doing Taekwondo. The civil engineering professor at Nevada competed in Traditional Karate Saturday, earning a pair of gold medals in Kata or forms. “The difference is between this,”Glass said as he simulated a slap, “and this” as he threw a well anchored punch past his visitors ear.”I’m actually a chicken. I’ve never really had to fight,” Glass, a brown belt, said. “But the question is if you have to use it– and you don’t ever want to use it… it’s all about the finishing blow.”That’s what his instructor, Friederich, said separates Traditional Karate from the rest. Friederich guessed that there are probably 100 different martial arts disciplines, each as unique and diverse as the religions if the world.

It’s not unlike the Fountain of youth'” Friederich said. “Everyone’s trying to find the ultimate fighting Sport. And many have sub-disciplines. For example, Traditional Karate has six subdisciplines, including Kempo, Kyokushin Kai and Shotokan. Friederich’s dojo ( Nevada Karate Assciation) specializes in Shotokan. The goal in Traditional Karate is the finishing blow, the one defensive – minded punch or kick that will incapacitate an opponent. Finishing blows, however, are saved for threatening situations, not competition. The conflict of interests causes a catch-22 for the competitors.”In Karate, the saying is ‘Karate will never be my first hand,’ “Glass said, referring to the defensive nature of the art. ” So its kind of strange in a competition like this where you’re both waiting for the other guy to make the first move.”

American Points Karate and Taekwondo fall under the category of sport Karate, where the goal is to gain points by precision punches and kicks. Friederich described it by saying,” the closest hands and feet to the target is awarded the points.”Taekwondo, however , is the only discipline that allows for knock outs during competition.And there are many more. The following is just a small sampling: Judo, from Japan, emphasizes throwing techniques combined with ground or mat work. The discipline uses arm bars and choke holds, Jujuitsu (Japan) is similar to Judo with the addition of sparring. Also, Jujuisu allows for wrist locks, which Judo does not.Aikido (Japan) is a soft style martial art. It is more passive in nature. For example, if an attacker throws a punch toward his face, the Aikido practitioner can recoil with the punch, grab the attackers arm and use the hold to throw him off balance, gaining the upper hand.Tai Chi (Chinese) is also a soft discipline where practitioners use a lot of slow, flowing movements. Tai Chi concerns itself with Yin and Yang, the two principles whose influences the destiny of creatures and things.””The general rule,” Friederich said, “is that all (forms of martial arts) share a common unity of mind body and spirit.”And, at least this weekend , a gymnasium.

USAdojo - October 9, 2010
We use cookies to ensure that we give you the best experience on our website. If you continue to use this site we will assume that you are happy with it.OkRead more