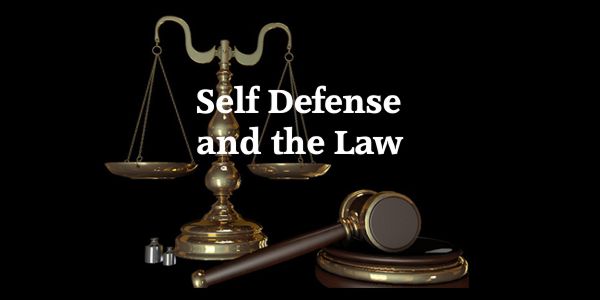 After reading the article defining assault, battery, and giving advice on handguns by Trooper Rodney Manuel in the last issue of the Gateway, I felt compelled to write and give some observations as a criminal defense lawyer on karate and the legal concept of self-defense.

We all know that self-defense is the basic premise upon which we learn and practice karate. Unfortunately, self-defense has certain legal ramifications which go far beyond what most sensei are prepared to teach. One of the stupidest questions I get asked when a karate-ka finds out I am a lawyer is, “how can I kick someone’s ass and get away with it?” This not only shows a lack of character on the part of the person asking the question, but also a lack of knowledge as to what “self-defense” really means.

Self-defense roughly defined means “the RIGHT to defend one’s person, or members of one’s family, and to a lesser extent, one’s property from harm by an aggressor.” The choice of the word “aggressor” is deliberate – most states give very little protection to someone who starts a fight.

Once you have determined you are in a situation calling for self-defense, you must consider the level of violence that is appropriate under the circumstances. I have looked into the law of Kentucky (my home state) and Tennessee (the home state for the IIKA) and found some interesting similarities and differences.

In Kentucky, you are justified in using force in self-defense when you believe such force is necessary to protect you “against the use or imminent (i.e., right now) use of unlawful physical force.” Deadly physical force is justified only when you believe such force is necessary to protect yourself from death, serious physical injury, kidnapping, or sexual intercourse compelled by force or threat. A simple threat will probably not be enough – the attacker must show their present intent to act upon the threat and be equipped to do so. Abused women (and men) may show a pattern of domestic violence to demonstrate their belief that their violent response was justifiable against their abuser.

When you are attacked by a police officer who is in the process of arresting you, the law does not protect you in defending yourself against unlawful or unwarranted arrest unless the amount of force being used upon you by the officer is unreasonable under the circumstances.

When you provoke a fight with the underlying intent to harm or kill your attacker, no protection is available under the law. On the other hand, you are protected when you are the initial aggressor in two instances: 1) you attack using non-deadly force and the force returned is deadly force or force that you believe will subject you to serious physical injury, or 2) you attack and then withdraw and make it clear that you are withdrawing and the opponent continues with deadly force or force which could cause serious physical injury.

When protecting another you are put to the same standards – the force used to protect another can be no more than what would be reasonable in defending yourself.

As to protecting your property, Kentucky says you can use force to prevent a trespass or burglary upon your property (whether it be your home or car or other property) only to the extent necessary to stop such conduct. Deadly force can only be used if an attacker is breaking into your home or attempting arson.

Interestingly enough, you may use force to prevent a person from committing suicide but it would be unreasonable to use deadly force. “He wanted to die anyway” won’t help much in a Court of Law. And, parents will be glad to know that using force in disciplining their children is not a crime. I tried to convince my parents years ago that it was a crime – they didn’t buy it either.
Tennessee is immensely simpler and to the point in their law. Self-defense is justified when the party is “about to be injured” or is defending another using only force “sufficient to prevent the offense” or there is an illegal attempt to “take or injure” your property.

We must also dispel the notion that there is a legal duty to “walk away” from a confrontation. Years ago, many states required you to retreat before you could legally invoke self-defense. Nowadays, you can “stand your ground” as long as you are legally in a place you have the right to be, and you do not have to retreat when attacked.

In the book American Law and the Trained Fighter, (Ohara Publications, 1983) Carl Brown, another Kentucky lawyer who no longer practices, suggests that we should consider the skill level of the martial artist in determining reasonableness and also in determining whether the attack by the martial artist is “aggravated” (i.e., with a weapon). What Mr. Brown means is that since us martial artists all possess mystical and overwhelmingly powerful skills, we should be judged differently and if we use our skills, even in self-defense, we should be deemed to have been armed. I personally believe that the butter has slipped off Mr. Brown’s biscuit. Fortunately, Kentucky, Tennessee and all other states agree so far.

A far better and more informative book is Martial Arts & the Law (Ohara Publications, 1985) by Dr. Karl J. Duff. This book is a good reference guide for any dojo and offers several illustrated hypothetical situations and even gives a few decent martial arts techniques which you could add to your repertoire. Duff’s book gives much more detail on self-defense, tournament liability, and a general discussion of ethics of self-defense.

One final observation I would like to make regarding self-defense concerns what to do when you act in self-defense and you are confronted with a legal dilemma, whether it be civil or criminal. My advice to anyone in this situation is to shut up and call a lawyer. In my practice, I have found it absolutely amazing how quickly people make matters worse for themselves by “just telling the truth.” I assure you that you can talk yourself into more trouble than you can talk yourself out of.
I am so adamant about this that on the back of my business cards I have printed:

My lawyer has told me to not talk to anyone about my case, to not answer any questions, and to not reply to accusations. Call my lawyer if you want to ask me questions, search me or my property, do any tests, do any lineups, or any other ID procedures. I do not agree to any of these things without my lawyer present and I do not want to waive any of my constitutional rights.

I did this because we live in a world where many people think our constitutional rights are just “legal technicalities” that lawyers use to “get them off.” Our country was founded on these principles and many of our veterans fought and some were wounded or died in defense of our constitutional rights. If you don’t believe me, ask Master Long at the Hall of Fame if he thinks our rights are important. If you know Master Long, you will not even have to ask the question.

One way you can help yourself in this regard is to make friends with a lawyer. They reproduce like rabbits and almost everybody knows at least one. If you are an Isshin-Ryu practitioner and you get into trouble, keep your mouth shut and call your lawyer.

Mr. Michael Taylor is a shodan from Sensei Jerry Smith’s dojo in Claiborne, Tennessee. He is a defense attorney with a practice in Middlesboro, Kentucky.

The Law of Self Defense

TIT for TAT – Training International Transporters for Tactics Against Terrorists

Self Defense Tips From Cordelia Clancy