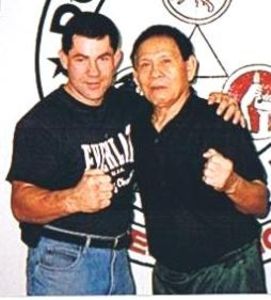 My instructor, Cacoy Canete, is an 89 year old Supreme Grand Master of the 12th Degree Black Belt rank, he lives in the city of Cebu which is in the Philippines, and he’s world famous because of his over 100 No Rules/Death Matches in the 1940’s, 1950’s and 1960’s!

He won all of the no-rules stickfights, and didn’t kill anyone!

There was talk that even the great BRUCE LEE wanted to learn from this Filipino Stickfighting legend!

My Supreme Grand Master is linked by a long blood lineage to Chieftain Rajah Lapu Lapu, and it was the great Lapu Lapu who killed Spanish explorer Ferdinand Magellan at the epic battle on Mactan Island in 1521, when the first fleet of Spanish tried to invade the Philippines, but this attempt was foiled because of Rajah Lapu Lapu and his Filipino warriors that fought against the very first attempt of foreign aggression towards the island of Sugbu in the Philippines.

The Filipino warriors only fought with fire-hardened rattan sticks, spears, and hand made swords called Kampilan, and so they used these weapons to fight against the more advanced weapons of the Spaniards which consisted of cannons, rifles, pistols and sabre swords.

And yet the Filipino warriors won the first epic battle because of their fighting spirit and determination.

Rajah Lapu Lapu had the final showdown of that battle when he fought against the leader of that Spanish expedition, his name was explorer Ferdinand Magellan.

Rajah Lapu Lapu and Ferdinand Magellan fought each other on the shores of the beach on Mactan Island, and it was there that Lapu Lapu killed Magellan, when he slashed his Kampilan at his enemy’s head, and it cut the explorer’s head off, the battle just stopped momentarily as Lapu Lapu held up Magellan’s head to his people, and he cried out these very famous words that are written in the history books, and they are etched in time.

“I bow before no Spanish King, my allegiance is to my people!” he yelled.

The Filipino warriors roared with the delight of victory as all the Spanish invaders fled back to their boats, and then they left the Island of Sugbu!

Lapu Lapu is described by a famous Spanish chronicle writer, Antonio Pigafetta, as using a superior form of stick and knife fighting that the natives of Sugbu called ‘Pangolisi’.

Rajah Lapu Lapu was the first acknowledged Master of Filipino Stickfighting, and the art was passed down from father to son, from generation to generation, and the blood line always goes directly back to the great Lapu Lapu, because the people that this art was taught to, were direct descendants of Lapu Lapu.

Supreme Grand Master Cacoy Canete was taught the Pangolisi by his father, uncles, brothers, and from the famous Saavedra Brothers of Cebu in the 1930’s, and it was these people who had were taught by their father’s in turn, and so on rite back to the time of Lapu Lapu.

This Filipino Stickfighting Art has been passed down over the many years since even before the time of Lapu Lapu, and now it rests in the hands of Cebu’s greatest stickfighter, Cacoy Cañete of the ‘Cacoy Doce Pares Eskrima World Federation’ with its own headquarters at C.Padilla street, Cebu City.

Even the family name of ‘CANETE’ also describes the fine art of which the family members propagate, because ‘Cañete’ means small cane, and the brothers in this Canete clan have all made this fine martial art of Filipino stickfighting a Martial Art which is practiced all over the world now.

When Supreme Grand Master Cacoy Cañete walks on down the street in his neighborhood of San Nicolas in Cebu, the people bow and pay respect to their great warrior icon of the Cebu City, and the children run up to him so that they may take his hand and touch it to their forehead as a sign of respect, and they all believe that Manong Cacoy Cañete has the ‘God Hand!’.

The Cebuano’s believe that their ‘CACOY’ has the blood of their hero Lapu Lapu running in his veins, and the Cebuano’s worship their Filipino stickfighting hero of Cebu Island in the Philippines.

When I received my title of ‘Grand Master’ from ‘CACOY’ Cañete, it makes me a part of the lineage that goes back to Lapu Lapu, and now I become one of very few Westerners ever to get that so incredible honor, status and privilege!

“I know that I’m a product of the great warrior men before me!”