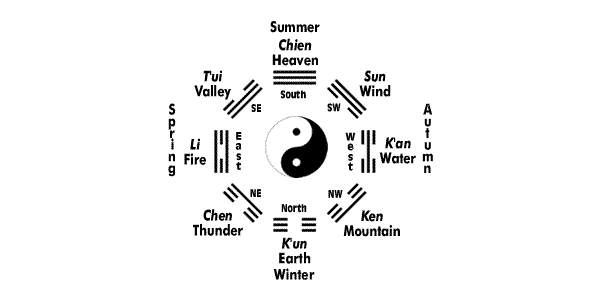 Ba Gua Zhang is literally translated as Eight Trigram Palm. This style is one of the three Nei Jia Quan or internal styles of China. The other two styles are Xing Yi Quan and Taiji Quan. As with Xing Yi and Taiji, the practice of Bagua generates Qi (internal energy) for both health and combat purposes. Baguazhang uses palm techniques exclusively, and this is reflected in the name, Eight Trigram Palm. This makes Bagua distinct from Xing Yi and Taiji styles, both of which incorporate fist techniques.

Changes). Techniques are demonstrated while walking low in a static circle. This technique of circular walking has three intentions: 1) confuse the opponent, 2) exhaust the opponent, and 3) absorb natural Qi evenly from all directions. The health benefits of this circular Qi cultivation ensures that longtime masters are not only excellent fighters but also live extremely long lives.

All Ba Gua movements are intended to be smooth and coordinated, with the body employed as a whole. No reliance is placed on using muscle power generated from a single portion of the body. The source of power in Baguazhang is the Dantian, or lower part of the abdomen two inches below the navel. The Dantian is considered to be the ‘receptacle’ for Qi in the body.

Bagua is also distinguished from other martial arts by heavy

emphasis on coiling and uncoiling movements. The art has been compared to guerilla warfare because of the practitioner’s ability to rapidly change directions to evade the opponent while using the hands to distract the opponent from devastating kicks and throws. Long hours of practice condition the palms to penetrate flesh, grapple joints, and to violently disrupt the flow of Qi.

Bagua is relatively new in terms of complete Chinese martial art systems, having been developed in the 19th Century. The founders of Bagua used history to their advantage and selected the best techniques from virtually the entire spectrum of Chinese combat styles. For instance, Baguazhang utilizes Shaolin Snake hand techniques, Xing Yi explosive footwork, Taijiquan throws, and the splitting palm of Tong Bei Quan. These are all integrated with a much more mobile format of movement – circular walking.

Weapons of the Imperial Guard

Bagua was taught to Imperial bodyguards in Beijing at a time when large gangs of thugs roamed the streets. It was therefore designed for combat with multiple opponents. This is accomplished by footwork and palm changes that facilitate rapid change of direction.

In addition to these stealthy items, Ba Gua practictioners use some of the largest martial arts weapons ever seen. The list includes ridiculously long broadswords, spears, and the fiercesome Wind and Fire Wheels. More normal-sized weapons such as staff, the Guan Dao, and straight sword forms (jian) are actively practiced as well.

Ba Gua training begins with basic walking and palm change techniques. The next phase is the Ding Shi Ba Zhang or Fixed Eight-Palm Set. This sets the basic foundation for all other hand and weapons forms to follow. Training in Ding Shi Ba Zhang relies heavily on long hours of circle walking.. Once Ding Shi Ba Zhang is mastered, which traditionally took at least one year, Lao Ba Zhang or Old Eight-Palm training begins. Lao Ba Zhang ( in some schools Ba Mu Zhang – Eight Mother Palm) is a more advanced level of training that involves multiple palm- and direction-changes. The seventh palm change of this set is particularly dizzying.

If one is able to complete Lao Ba Zhang, the next phase is Lian Huan Zhang or Cascading Palm. The student will be asked to perform even more complex movements and contortions while striving for greater fluidity and constant motion. Forms continue to gain in complexity and length, including two man sparing sets. Ultimately one must master the 64 Palm Set, which living up to its name is at least eight times as long and eight times as difficult as the Lao Ba Zhang (Old Eight Palm) set.

In the old days, only after a student had studied extremely hard (chi ku) a few years with the empty palm sets would the master consider teaching weapons forms. Luckily times have changed and one may not have to wait such a long time to study the weapons forms.

In Liang Zhen Pu School of Ba Gua, there is only one kind of walking technique, and it is known as Tang Ni Bu or Mud Sliding Step. This is a fluid walking technique that resembles the motion of sliding on soft mud or clay. There are three commonly used terms to describe footwork in Ba Gua. Shunbu refers to the most common form of stepping taken only in a forward direction. Koubu (Toe-In Stance) is a pigeon-toed stance with the lead foot most commonly used to stop motion in a particular direction. Baibu (Toe-Out Stance) is when one opens the trailing foot to changing direction in Ba Gua Zhang. All three steps are used extensively and must be constantly practiced and perfected. Waibu (Outer Foot) and Neibu (Inner Foot) in relation to the center of the circle are important terms to help a student’s understanding of the many changes of direction.

A trademark move of Ba Gua is Tui Mo Zhang (Turning the Millstone Palm). This technique resembles the motion of

constantly grinding an invisible object with the lead hand. The lead hand extends out from the body with the palm facing the opponent. The index finger and thumb form an “L”, and both palms have a circular or concave shape. The rear palm is close to the body and the tips of the fingers are just below the elbow of the lead hand. As in all Ba Gua moves, the torso is turned towards the center while the feet walk the edge of the circle. One revolution of the circle should only take eight steps by the student, referring to the eight Gua, or trigrams.

Gai Mo Zhang (Covering Millstone Palm) is an overhead strike that is very deceptive because it is held behind the head until the last minute, when the hand suddenly leaps over the head, into the opponent’s head or upper torso.

Dan Huan Zhang (Single Palm Change) refers to the use of one hand as the opening move before a brief sequence of moves to change direction. In fighting, this would be one block followed by a strike before changing direction to fight other opponents.

Shuang Huan Zhang (Double Palm Change) means the use of both hands as an opening move in a typically longer sequence of moves to change direction. This would translate into a block followed by another block, grab, or diversionary maneuver before the final strike or throw before changing direction perhaps multiple times depending on the number of opponents. As you can see complexity increases as one progresses from Dan Huan Zhang to Shuang Huan Zhang.

Chuan Zhang (Penetrating Palm) is a common and highly aggressive technique of Ba Gua which imitates the thrusting hand techniques of Shaolin Snake forms. The fingers are close together and the thumb is tucked in to resemble a knife or spear.

Liu Zhang (Sliding Palm) is an unusual tactic. It starts as an inward swinging block and continues to swing down, up, then out to strike unexpectedly at the opponent’s groin.

Pi Zhang (Splitting Palm) is the forming of the palm into a cutting edge with the side of the palm facing down and the thumb upwards at a slight angle. The striking motion is swift and downward, as in chopping wood.

Other basic terminology includes Wang Xia Chen, or to sink weight and Qi in one’s stance. Fang Song, or to relax, which should be a constant objective. Your head should Ding or feel as if it is being propped or pulled up. Huxi means to breathe, don’t forget to do that!