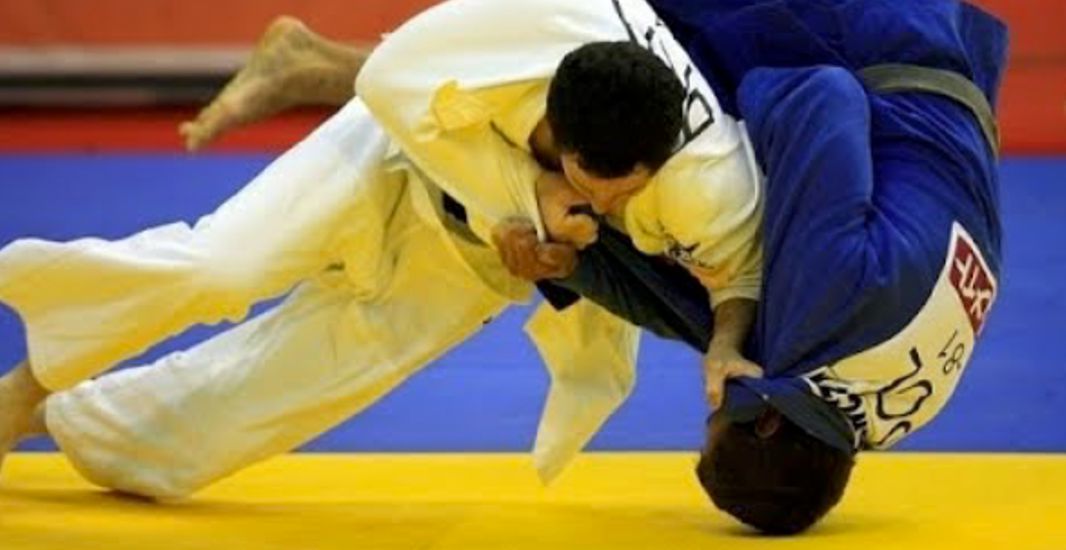 Judo is arguably the most underrated fight sport for nonweapons self-defense. For years it’s been overshadowed by striking-based martial arts. It wasn’t until the birth of the UFC that grappling gained the prominence and respect it deserved.

The UFC clearly demonstrated the importance of being prepared for all contingencies; i.e., skills in striking, grappling and groundwork. But judo never gained the recognition it deserved due to MMA rules. MMA fights are won by strikes, knockouts, or submissions. It would be different if points were awarded for throws.

My interest in judo was first sparked when I saw the old “Mr. Moto” films as a kid. It’s about a Japanese detective played by [European actor] Peter Lorre. In the films he portrayed a master of martial arts and disguise. He pursued criminals around the world fighting them using judo and boxing – and for a little kid, it seemed magical.

My grandfather taught me a few easy judo skills and enrolled me in a local Turnverein (in Germany), and whenever my family visited Tokyo I would attend the kid classes at the Kodokan. However after a while I had to switch to jujitsu because of a severe asthma condition (Japanese Jujitsu is nowhere as physically demanding as judo).

I tried judo again in my teens and as an adult but my asthma condition still lingered and it slowed me down. My view of judo was always from the perspective of selfdefense rather than sport. This benefited me since I was always traveling to different countries, and was able to use judo tactics to fend off bullies.

Judo is so much more effective on the street than most people realize. However for reasons I will explain in this article, judo must be adapted for street conditions which differ greatly from the sport.

Sport Judo – The Goal
Since judo is a sport the goal is to attain the skills to successfully win competitions, including the World Championships and Olympics.

Street Judo – The Goal The goal is to add judo to an integrated self-defense program which includes skills in: striking, grappling, ground defenses and counter weapon skills

Sport Judo – Mindset Many top judoka (along with other fight sport athletes) have a win at all costs mindset, which is exactly what’s needed.

Street Judo – Mindset Students in self-defense who haven’t trained in fight sports often lack in the confidence to win a street fight.

Training for a street fight needs be scaled to approximate street scenarios. The street mindset must be – attack preemptively, and quickly escape to safety

Sport Judo – The Rules Like the UFC, competitive judo abides by a set of rules. These include awarding points for certain techniques including throws and submissions. Players adapt their game to win under those specific rules.

Street Judo – No Rules There are no rules on the street, no tap-outs, no referees or judges to stop the fight – whatever happens, happens. Preparation to survive must be made during training.

Sport Judo – Stay and Fight In sport judo, the goal is to attack hard and fast and keep fighting until one competitor wins or taps out.

Street Judo – Stay and Fight The stand and fight rule does not apply in street attacks. The goal is to attack first when you feel things going south. A major downfall of traditional martial arts is they have been taught to wait for the attack – WRONG! Most street fights are won with a preemptive attack. Once you win, it’s important to escape to safety immediately.

Sport Judo – Kuzushi There are three stages to a judo throw, Kuzushi (unbalancing), Tsukuri (entering in), and Kake (the execution). All three must be present in order to achieve a successful throw. Kuzushi is practiced in all grappling styles – it is unbalancing or breaking the opponents balance by either pulling, pushing, lifting or spinning the opponent.

Sport Judo – The Grip The grip is all important in competitive judo, it’s your opponent’s handles. The fight for the grip is key and once you secure a strong grip it’s usually just a matter of time until you are able to throw your opponent

Street Judo – The Grip It’s a bit different on the street, you have more options and can choose either a clothing grip or body grip. On jackets or coats you can utilize a judo grip, however you can also grip the body as in wrestling.

Sport Judo – Favorite Throws The best judo players usually have a trademark throw, everyone knows what it is however it’s difficult to stop because a skilled player uses a series of lessor throws to set up the main one.

Street Judo – Favorite Throws Unlike competitive judo, the defender doesn’t always need to set up a throw; non-grapplers have no idea about what’s happening to them. Many strikers panic and freeze when they are manhandled. The defender only needs to know a few throws that conform to specific situations.

Sport Judo – Ground surface Judo competitions are held on mats, in addition judoka are trained to take falls by slapping out to minimize the impact of the throw on a mat.

Street Judo – Ground Surface There are no mats on the street, so if the defender falls slapping out (on concrete ) can become a very painful experience. They should be able to roll in a way to protect themselves. Throwing an attacker on concrete can cause serious injuries to him and potential legal consequences for the defender.

Sport Judo – Learning the Skills Judo, like wrestling involves a steep learning curve. From what I have seen it takes about 4-5 years to acquire functional skills, much longer than learning striking skills. The best time to start judo is during childhood or teens. Serious judo players usually practice several hours a day and about 5-6 days a week.

Street Judo – Learning the Skills Unfortunately students of self-defense cannot be as committed to training as their sport judo counterparts. It’s not their fault. They are usually older adults and are either working, studying, pursuing their careers and/or have families.

Most individuals interested in self-defense usually come from one of three groups: 1) victims or violence, usually older adults and women, 2) adults who were involved in martial arts or sports when they were younger and are looking to continue their martial activities, and/or individuals involved in law enforcement or security.

Sport Judo – Injuries Judo throws can be quite devastating, even practicing in class, accidents can quickly lead to severe injuries. These incidents can also end a promising judo career. They often include injuries to the: head, neck, shoulders, ribs, knees and ankles. Additionally, many popular throws (including Uchi-Mata / Harai-Goshi and others) often jettison the thrower on top of the person being thrown due to the momentum and ballistic force of the throw. This is fine for competitions which are played on mats but not on the sidewalk.

Street Judo – Injuries With careful coaching, students can avoid major injuries. With several months of rigorous and consistent practice a defender can easily throw a non-grappler attacker to the ground (if he can get past the striking) the injuries would be to the attacker, and they can be severe enough to initiate potential criminal charges against the defender.

Sport Judo – Opponent’s Size Size and weight make a HUGE difference in competition. That’s why there are weight divisions in every fighting sport. For example, looking at two great champions from the past, Koga could never have beaten Yamashita.

Street Judo – Opponent’s Size Size and weight are even more important on the street, you have no choice, you have to deal with what’s in front of you. Additionally many practitioners of self-defense don’t have the extensive training and experience of a seasoned judoka. If things go badly from the start, you will need to draw your weapon. Even skilled judoka can come across very large and strong opponents on the street that they are unable to handle, size and strength make a big difference.

Sport Judo – Ground Work Ne-Waza is the term for ground-work in judo. It’s also taught in jujitsu and BJJ. You win by submissions and/or by the length of time you can pin someone.

Street Judo – Ground Work Ground work is quite different when it comes to selfdefense. You don’t want to stay on the ground for long. The primary goal is to nullify the attack and get to your feet asap, then escape.

Street Judo Using competition style throws on the street can be dangerous for your opponent and can result in serious head and neck injuries resulting in paralysis, coma and death if thrown hard and fast enough onto a concrete surface. Throws selected for the street need to be attenuated and adapted to not incur criminal charges for the defender.

Sport Judo – Submissions In addition to throws in judo, there are also submissions including pins, chokes and Joint-locks. In most cases judges will call to stop the fight if one competitor is helpless or unable to continue.

Street Judo – Submissions There are no submissions on the street, chokes should take an attacker to unconsciousness and joint-locks must be applied for breaks.

Sport Judo – Instruction In the early days of competitive judo, the Japanese dominated the sport, their method of teaching was “NO TEACHING,” instructors would demo a throw and just expect you to figure it out on your own. This may work in Japanese culture but doesn’t work well for the Western student. Japanese teaching methods no longer dominate judo – in the 2016 Olympics in Rio De Janeiro, the gold and silver medals were distributed between a dozen or more countries in all categories.

Street Judo – Instruction Street judo should of course be taught by someone with extensive judo experience, however a key factor must be the inclusion of combative applications, e.g. using illegal tactics (in competitive judo) such as punching, kicking, eye-gouges and the use of weapons.

Many individuals studying self-defense do not have the time to train, the best way of teaching is the use of the Pareto Principle, or the 80/20 rule which states that carefully selecting the most important 20% of the subject matter (e.g. for the street in this case) can produce 80% of the positive results. This must be determined by the coach. I’m not saying they will be able to compete in the sport, but that was never the goal.

Coming UP in Part 2

Iain Abernethy - January 29, 2017
We use cookies to ensure that we give you the best experience on our website. If you continue to use this site we will assume that you are happy with it.OkRead more