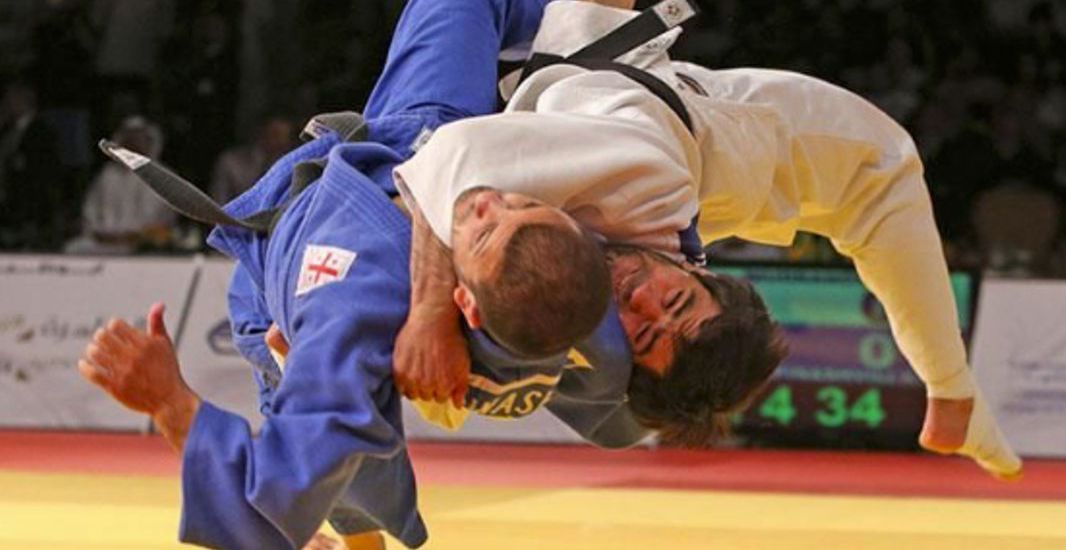 The Force of Competitive Throws

The Impact of someone being thrown on their head on concrete is far more devastating than the damage resulting from any punch or kick.

For example, if a 200 lbf person is thrown on their head from a height of four feet, and we assume the drop is straight, (and the neck doesn’t bend) we have the following information:

If that force is applied over a 9” sq. section of a person’s head, you create a pressure, or a stress of 2,133 pounds per square inch. In general it takes about 520 lbf to crush a human skull. A four foot drop onto someone’s head landing on concrete can potentially induce a concussion, coma or death. If the neck collapses it can potentially cause paralysis or death.

The Jujitsu Lineage – Comparing the Three Styles
It’s important to differentiate the fighting styles that emerged from Japanese jujitsu. There is a great deal of confusion between Japanese jujitsu (the original style), judo and BJJ (Brazilian Jujitsu), even by many senior students in each of the disciplines. Essentially jujitsu, judo and BJJ all share a common denominator: Defeating a larger and stronger opponent with technique.

Jujitsu
Jujitsu was originally developed in Japan during the mid-16th century and eventually grew to more than 700 schools, with each school emphasizing a particular approach or specialization. Two of these schools formed a major basis of Kano’s judo.

Jujitsu Workouts
A workout in jujitsu is not nearly as vigorous as one in judo or BJJ. Tactics are usually practiced with partners employing drills – randori is limited due to the dangerous nature of some techniques.

Judo
Judo refers to the amalgam of several jujitsu styles that Kano created in 1882. There is a heavy emphasis on throwing, but groundwork is also a factor. Kano borrowed techniques from several jujitsu styles and eliminated dangerous techniques so people could safety practice it as a sport. Since the 1964 Olympics in Japan, Judo has become an Olympic sport and is practiced all over the world.

Judo Workouts
The workout is extreme and taxes the whole body. I used to wake up in the morning with my fingers frozen in a claw configuration just from grabbing the gi so hard from the previous evenings training. There are also more than a few injuries, even for skilled judoka’s, accidents happen in the rough and tumble world of judo.

BJJ (Brazilian Jujitsu)
Bjj was developed from old style judo/jujitsu. In the early days, judo was called Kano’s jujitsu. BJJ is essentially grappling with a focus on groundwork. It was brought to Brazil from Japan by Mitsuyo Maeda. He introduced judo and jujitsu to Carlos Gracie in 1925. Besides teaching Kano’s jujitsu, he also the taught leg locks of Kosen judo as well as elements from catch-as-can.

BJJ has become one of the most popular martial sports in the world. The goal is to take the opponent to the ground and control, pin, armlock or choke him/her. It’s an integral part of MMA.

BJJ Workouts
Like judo, BJJ is extremely taxing on the body, it’s a super-tough workout. Some elements of catch wrestling are taught in a number of schools along with leg-locks

Regarding Groundwork (Ne-Waza)
I was never a fan of groundwork in judo, it was always such grueling work, and I was lazy, however I have to admit, to be well rounded it’s a necessary skill that everyone needs, particularly for getting off the ground.

Despite what many BJJ people say (that every fight goes to the ground). I have experienced it only once. IMO, If you have a good standing clinch going to the ground is less likely. However, as always you need to be prepared for the worst.

Psychology For the Street
Judo throws can cause serious and extensive destructive damage, so why am I advocating judo for an integrated self-defense program — Because the judo tactics I teach are heavily altered and adapted for the street. The goal is 1) not to seriously injure your attacker, it can cause serious legal problems for you, 2) adapt the throws so beginners can easily learn and apply them.

– Chokes & Joint-Locks
Whereas judo, jujitsu and BJJ use submissions for chokes and joint locks. The street defender must not disengage if the attacker taps out. Instead the defender should take the choke or joint-lock to conclusion – that is to render the attacker unconscious and/or break the joint.

One of my former students used a arm-bar on an attacker – the attacker tapped out, the student let go and was knocked down. He was fortunate that the attacker didn’t have a weapon.

Note: Once you have choked out your attacker, lay him on the ground carefully so not cause extreme injuries to his head while falling (the worst head/neck injuries occur when the attacker hits his head on a hard surface). In addition never turn your back on someone you’ve choked out. Some individuals wake up almost immediately, while others take a few minutes. In all cases the opponent will wake still thinking he is in the middle of a fight and keep attacking you.

For the average judo player my modifications may not follow the traditional look and feel of the classic throws, however they echo the same concepts. The Alterations are Important Because:

I don’t encourage students to learn all the throws listed here but to be familiar with them. Then carefully choose a few that might correspond to their particular talents, skills and constraints. Everyone has physical capabilities and limitations and the throws need to be adjusted to the individual.

Judo Techniques Broken Down
I usually ask students to select one throw for a large heavy opponent and one for a smaller lighter opponent. I have listed judo techniques that are applicable for the street from 5 major categories.

For example some throws are better suited for larger men/women, e.g. Harai-Goshi and Osoto-Gari. Seio-nage is better suited for smaller defenders. Sweeps are arguably best for very large opponents, however they are among the most difficult to master.

Kansetsu-Waza (Joint Locks)
Note: In general, armlocks and wrist locks are difficult to apply immediately. In many cases the opponent needs to be softened up first with some strikes
Ude Hishige Waki-Gatame (outlawed in judo)
Ude Gatame (Standing Arm Lock)
The Mirror Hand – (Kagami) Counter to Wrist Grab

Best Chokes for the Street
I prefer the following chokes for the street because they are easy to learn, easy to apply and scare the shit out of the victims. Inasmuch as the rear-naked is popular, it takes more time to apply. Best Chokes:

Joint-Locks for the Street
Joint locks look very easy to do in the movies however they are actually very difficult to do in reality. The best method is to soften up your opponent with some strikes first. In general I have seen a decline in the quality of joint locks overall, it could be because the emphasis these days are on techniques used in MMA. Joint locks can be extremely effective if done correctly.

Throws to Avoid for the Street
As I previously mentioned, for the street you want to avoid the high value throws so popular in judo competitions. They are too ballistic and there is a chance that you will be jettisoned down to the ground with your throw. They can also seriously injure your attacker.

Chokes to Avoid for the Street

Groundwork For Self-Defense
Being able to escape from holds, pins and being punched on the ground is the chief concern for street judo. Nullifying a ground attack and getting back to your feet as fast as possible I feel are the most important aspects of ground fighting. There are non-traditional alternatives for fighting from the ground that include attacking the eyes, and drawing your weapon (the weapon you should always carry).

High Value Judo Techniques for the Street
I usually teach the following judo (and non-judo) tactics first. Beginners need an easy array of techniques they can quickly learn and apply to gain confidence. These techniques are highly effective.

*Why it’s important to learn the original Japanese names for judo techniques: Judo is played in most countries around the world, knowing the names of judo techniques is a language that helps you to communicate, compare and learn.

History of Jujitsu as a Method of Self Defense

Donald Miskel - October 17, 2013
We use cookies to ensure that we give you the best experience on our website. If you continue to use this site we will assume that you are happy with it.OkRead more