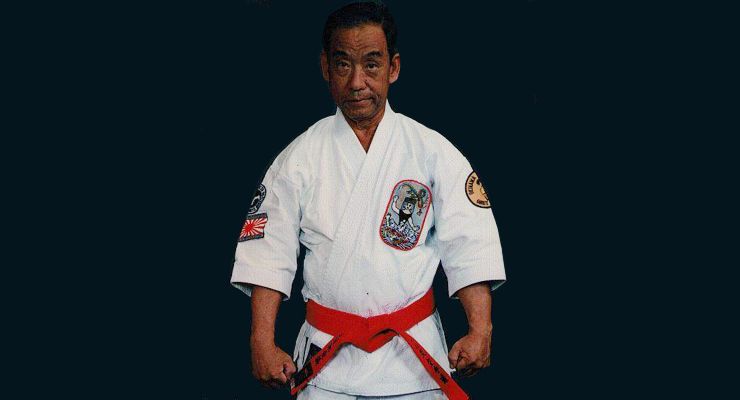 Angi Uezu was born January 3, 1935 in Chalan Kiya on the island of Saipan. He is the former head of one of the major Isshin-ryu karate organizations, the Okinawan Isshin-Ryu Karate Kobudo Association or the O.I.K.K.A. which was founded in 1990. Angi Uezu is the son-in-law of the system’s founder, Tatsuo Shimabuku, and a 10th degree Black Belt in that art.

During the Battle of Saipan he was injured by American machine gun fire. His family was repatriated to Okinawa after World War II. In 1958, he married Yukiko Shimabuku, the third daughter of Tatsuo Shimabuku, and he and Yukik they had a son.

He began training in Isshin-ryu karate in late 1962 and received his Black Belt in January 1965. He is now retired from teaching martial arts and lives in Iribaru, Uruma City. Master Uezu, although retired from teaching, occasionally comes to the United States to hold seminars.

In 1997 Angi Uezu was inducted into the Isshin-ryu Hall of Fame.

Angi Uezu is the co-author, along with Joseph Jennings, of the book “The Encyclopedia of Isshin-Ryu Karate: Book One, Beginner to Green Belt”.