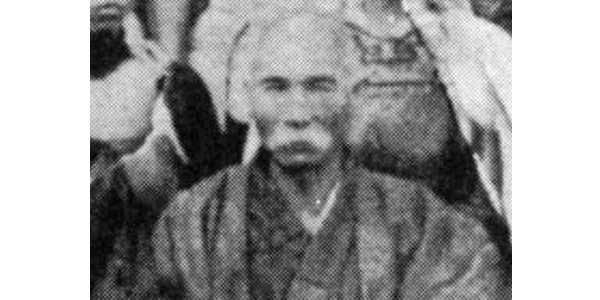 Born in Shuri, Okinawa, Japan in 1831, Itosu trained under karate greats Sokon “Bushi” Matsumura and Kosaku Matsumora. His good friend Yasutsune Azato recommended him to the position of secretary to the king of the Ryukyu Islands. He was famous for the superior strength of his arms, legs and hands. Itosu was said to have even walked in the horse stance (from which he received his nickname, Anko). Itosu supposedly was easily able to defeat Azato in arm wrestling. Itosu had very strong hands and could crush a thick stalk of bamboo with his vice-like grip. It is said that he walked past the imperial tombs everyday and would practice his punches against the stone walls that lined the road. Itosu believed that the body should be trained to withstand the hardest of blows. Under Itosu’s direction, Gichin Funakoshi (Shotokan founder) spent ten years mastering three basic kata.

Describing the art in his own words:
Karate means not only to develop one’s physical strength but to learn how to defend oneself. Be helpful to all people and never fight against one person. Never try to strike if possible. even when taken unawares, as perhaps meeting a robber or a deranged person. Never face others with fists and feet. As you practice karate, try to open your eyes brightly and keep your shoulders down, stiffen your body as if you are on the battleground. Imagine that you are facing the enemy when you practice the punching or blocking techniques. Soon you will find your own striking performance. Always concentrate attention around you. A man of character will avoid any quarrels and loves peace. Thus the more a karateka practices the more modest he should be with others. This is the true karateka.

Below is a letter written by Itosu Sensei in October of 1908. This letter preceded the introduction of karate to Okinawan schools and eventually to the Japanese mainland.

Tode did not develop from the way of Buddhism or Confucianism. In the recent past Shorin-ryu and Shorei-ryu were brought over from China. They both have similar strong points, so, before there are too many changes, I should like to write these down.

1. Tode is primarily for the benefit of health. In order to protect one’s parents or one’s master, it is proper to attack a foe regardless of one’s own life. Never attack a lone adversary. If one meets a villain or a ruffian one should not use tode but simply parry and step aside.

2. The purpose of tode is to make the body hard like stones and iron; hands and feet should be used like the points of arrows, hearts should be strong and brave. If children were to practice tode from their elementary-school days, they would be well prepared for military service. When Wellington and Napoleon met they discussed the point that tomorrow’s victory will come from today’s playground’.

3. Tode cannot be learned quickly. Like a slow moving bull, that eventually walks a thousand miles, if one studies seriously every day, in three or four years one will understand what tode is about. The very shape of one’s bones will change.

Those who study as follows will discover the essence of tode:

4. In tode the hands and feet are important so they should be trained thoroughly on the makiwara. In so doing drop your shoulders, open your lungs, take hold of your strength, grip the floor with your feet and sink your intrinsic energy to your lower abdomen. Practice with each arm one or two hundred times.

5. When practicing tode stances make sure your back is straight, drop your shoulders, take your strength and put it in your legs, stand firmly and put the intrinsic energy in your lower abdomen, the top and bottom of which must be held together tightly.

6. The external techniques of tode should be practiced, one by one, many times. Because these techniques are passed on by word of mouth, take the trouble to learn the explanations and decide when and in what context it would be possible to use them. Go in, counter, release; is the rule of torite.

7. You must decide whether tode is for cultivating a healthy body or for enhancing your duty.

8. During practice you should imagine you are on the battle field. When blocking and striking make the eyes glare, drop the shoulders and harden the body. Now block the enemy’s punch and strike! Always practice with this spirit so that, when on the real battlefield, you will naturally be prepared.

9. Do not overexert yourself during practice because the intrinsic energy will rise up, your face and eyes will turn red and your body will be harmed. Be careful.

10. In the past many of those who have mastered tode have lived to an old age. This is because tode aids the development of the bones and sinews, it helps the digestive organs and is good for the circulation of the blood. Therefore, from now on, tode should become the foundation of all sports lessons from elementary schools onward. If this is put into practice there will, I think, be many men who can win against ten aggressors.

The reason for stating all this is that it is my opinion that all students at the Okinawa Prefectural Teachers’ Training College should practice tode, so that when they graduate from here they can teach the children in the schools exactly as I have taught them. Within ten years tode will spread all over Okinawa and to the Japanese mainland. This will be a great asset to our militaristic society. I hope you will carefully study the words I have written here.