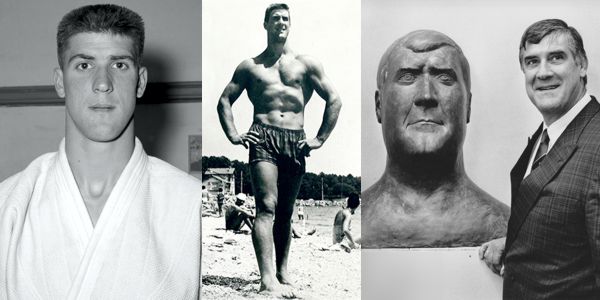 Anton Geesink of Holland was a three-time World Champion Judoka having emerged victorious in 1961, 1964 and 1965. He is most remembered, however, for his victory that shocked the world when he won the Olympic Gold Medal at the Tokyo Olympic Games in 1964 in front of the Japanese faithful. Mr. Geesink served the International Judo Federation (IJF) as its Education Director from 1985 through 1989 and has also served as a member of the International Olympic Committee (IOC) from 1987. His election on as a Judoka marked the second time in the history of the IJF that a judoka was elected as a member of the IOC. Anton Geesink holds the IJF 10th Dan and is still heavily active in the IJF and IOC.

Anton Geesink was inducted into the IJF Hall of Fame and he was confirmed at the IJF Ordinary Congress on the 8th of September 2003.

Anton Geesink first participated in the European Championships in 1951, and placed second in his category. The following year, he won his first European title. Until 1967, 20 more European titles would follow.

Judo debuted as an official sport at the 1964 Summer Olympics, which were held in the sports home country, Japan. Although Japan dominated 3 of the 4 weight divisions, the light, middle and heavy, Anton Geesink won the final of the open weight division, defeating Akio Kaminaga before 15,000 people at Nippon Budokan Hall and then he defeated Akio Kaminaga again.

After winning the 1965 World Championships and a last European title in 1967, Geesink quit competitive judo at the age of 33.

Anton Geesink is the only living 10th dan grade kodansha recognized by the IJF. There are three 10th dan kodanshas recognized by Kodokan: Toshiro Daigo, Ichiro Abe and Yoshimi Osawa.

It was recommended by Anton Geesink’s at an IFJ meeting in 1986 that one competitor should wear a blue uniform in international matches so that judges, referees and spectators can tell the athletes apart more easily and this was later adopted.

Professional Wrestling Career
In October 1973, All Japan Pro-Wrestling owner Giant Baba recruited Anton Geesink to join AJPW. Baba sent him to Amarillo, TX and Dory Funk Jr. and Terry Funk trained him for a month. He worked for All Japan from 1973 to 1978, as a popular part-timer.

Geesink was among the IOC members suspected of accepting bribes during the scandal surrounding the election of Salt Lake City as the host of the 2002 Winter Olympics. The IOC considered the situation not serious enough for expulsion, and issued a warning to Geesink.

Anton Geesink passed away in the Netherlands on August 27, 2010 at 76 years old.