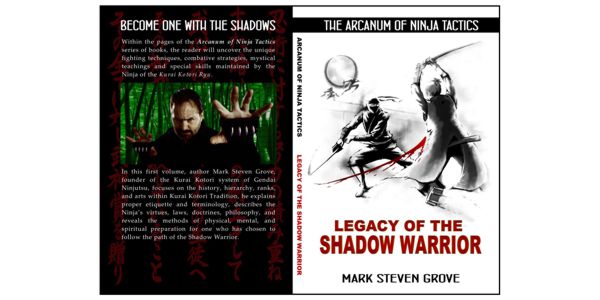 Arcanum of Ninja Tactics: Legacy of the Shadow Warrior is available on Amazon. Written by Mark Steven Grove, the book is Illustrated by Matthew White with photography by Dan Yahnian.

About The Book:
Within the pages of Mark Steven Grove’s, Arcanum of Ninja Tactics series of books, the reader uncovers the unique fighting techniques, combative strategies, mystical teachings and special skills maintained by the Ninja of the Kurai Kotori Ryu. In this first volume of the Arcanum of Ninja Tactics, author Mark Steven Grove, founder of the Kurai Kotori system of Gendai Ninjutsu, focuses on history, clan hierarchy, ranks, and the many arts contained within Kurai Kotori Tradition. He also explains proper etiquette, describes the Ninja’s virtues, laws, and doctrines, delves into unique philosophies, and reveals the methods of physical, mental, and spiritual preparation for one who has chosen to follow the path of the Shadow Warrior.

About the Author:
Mark Grove is a martial artist who teaches the arts of the Classical Ninja. Mark  has written dozens of Ninja training manuals and has created specialized weapons for his students. He works in the entertainment industry as a stunt performer, special effects technician, an actor, writer and as a director.

Mark Grove began studying the martial arts in 1972. He practices the classical Ninja arts including swordsmanship, unarmed fighting, acrobatics and a multitude of exotic weapons. As he grew into young adulthood, his dedication to training in the traditional Japanese arts earned him a great deal of recognition. He has also spent a great deal of time practicing and perfecting other external and internal arts such as flower arranging, calligraphy, mysticism and meditation.

As a young man of 17, Mark  Grove was asked to do a seminar at a local martial arts school. His demonstration was advertised and almost two hundred people attended and his impression was a positive one and he was asked to teach a class. Mark agreed, but not because he wanted to be and instructor, but because he figured out that teaching would help him organize the experiences and ideas he had gained while on his Ninja path and this would help him to develop those experiences and ideas further. After a short time on this quest, he realized that teaching the art was an integral part of who he was. He continued teaching religiously for many years, and in 1988 he was hired as the martial arts instructor for the Lowry Air Force base in Denver Colorado. Mr. Grove also taught the Denver Police, National Guard, ATF. After 9/11, he has been involved with training the TSA (Transportation Security Administration) with terrorist response skills.

Tao of Jeet Kune Do

Why is Jujutsu Spelled So Many Different Ways