Becoming a man doesn’t happen by accident. It isn’t by coincidence or happenstance. It is a choice and it requires constant conscious effort. It isn’t something that’s done once and thereafter lasts a lifetime. It is a life commitment and a lifestyle.

This essay was written as a speech for my son’s retirement from the military. Don was a military policeman and was trained as an antiterrorist specialist. He presently serves as a captain on a federal police force in Virginia. I was the keynote speaker at his retirement ceremony which took place several years ago on the USS Wisconsin, a battleship docked in Norfolk Virginia. I am presenting it for Father’s Day. I feel that it is a message for any male who aspires to be a man and a warrior. 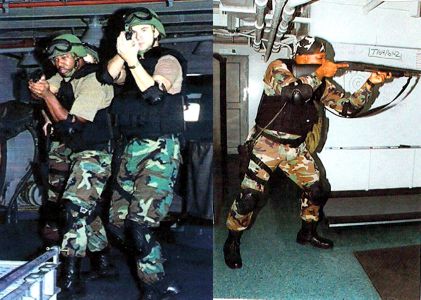 It is a privilege to be standing here today. I’m honored to be part of this auspicious occasion. In a sense, I feel that I am qualified to speak here today since I have known the honoree since he was in diapers. I won’t elaborate on that but I’ve known Chief Don Miskel all of his life. I’m his father.

The trick now, is to do this without trying to preach a sermon. It isn’t always the best idea to put a preacher behind a podium if you don’t want to hear him preach. Somehow, I’ll try to discipline myself and follow protocol.

In nature there is a universal principle. It’s called the law of opposites. The Chinese call it yin and yang. It is the way God balances his universe. For everything there is an opposite. Male and female, dark and light, up and down, and yes, black and white. It even expresses itself in physics. ‘For every action there is an opposite and equal reaction.’

I have heard some excellent insights alluded to here today. But I’d like to talk about the opposite aspects of the characteristics that make a man a man. First of all let me say that being a man has to do with more than just plumbing. It’s more than how many women you can woo, how many babies you can make or how many heads you can peel. When I speak of being a man, I’m talking about more than just man the gender. Being a male doesn’t make you a man.

Becoming a man doesn’t happen by accident. It isn’t by coincidence or happenstance. It is a choice and it requires constant conscious effort. It isn’t something that’s done once and thereafter lasts a lifetime. It is a life commitment and a lifestyle.

Believe it or not, being a warrior alone doesn’t make a person a man. First of all you don’t have to be a man to be a warrior. There are some women who fill that role quite well, so that alone isn’t the making of a man. There are many other aspects to being a man that is relevant beyond a man’s ability or his chosen career. A man can retire from a job but being a man should be a lifetime endeavor.

Too often manhood is described as aggression or machismo. Those characteristics do not make a man. Those are just the results of testosterone. I’m more impressed with the other side of the coin.

A man may be a warrior and a warrior must be a fighter but being a man requires a higher order of understanding. Any person can fight and indulge in aggressive behavior but not everyone can stand toe to toe with an adversary. A man may be called on to stand in that position at some time in his life. A man has to be able to fill those shoes sometimes but I’m referring to another kind of strength here. I’m talking about the strength to be loving. To be kind and gentle. To be tender. I’m talking about being man enough to hug a child or embrace a wife without feeling compromised or less than a man. I am not impressed by physical strength, aggression or physical prowess. In a sense, those attributes are a given in the human male. Men are physically powerful to a greater or lesser degree. All men have man strength and have a tendency to be aggressive. There’s nothing especially commendable or unusual about these traits in-as-much as they are common in all men. I am more impressed by the ability to transcend the aggressive nature of the average male and find a higher ground. That is the mark of a true man. A man can rise to the occasion and be what he is called on to be.

I am proud of my son. He has been successful in both of these areas of manhood. Those of you who know him now may find it hard to believe but he was a rather timid child. I was a martial arts instructor and had schools and taught classes around Chicago. In a sense, Don grew up in gyms and dojos. I probably watched too many kung fu movies in the sixties and seventies. In an effort to make Don more aggressive I would attack him without warning. He had to learn to defend himself from the sudden attacks that could happen at anytime. Considering that, I’m surprised that he didn’t do me in in my sleep. I used to break boards and bricks to entertain the kids in the neighborhood. What do you do when your father is Bruce Leroy? You either get tough or you find a hole and crawl in it. In spite of my dubious parenting skills Don grew up to surpass all of my expectations. He grew up to be a fine man and a wonderful human being. Of course, I’m his father. I’m biased, but you can ask anyone here around you. I’m sure they’ll agree with me. Don is a warrior but he is more than just that. He is a man.

We all want to leave an impact on our worlds. We want to leave behind a legacy that will live after we are gone. The greatest thing that we can be in this life is a servant. There is no greater calling than serving. Soldiers who answer the call are servants. Cops and firefighters are servants. Preachers and teachers are servants. Christ himself was both master and servant. A servant ministers to the need, whatever that need may be.

Don answered the call but his work is not yet done. He is retiring from one phase of his life but he continues a life of service. This is the true call of a warrior. This is the true call of a man. Son, you have changed uniforms. You have changed professions, but keep in mind that yours must always be a life of service. Answer the call, my son, whatever that call may be. Be a man and serve well. That’s what a man does.