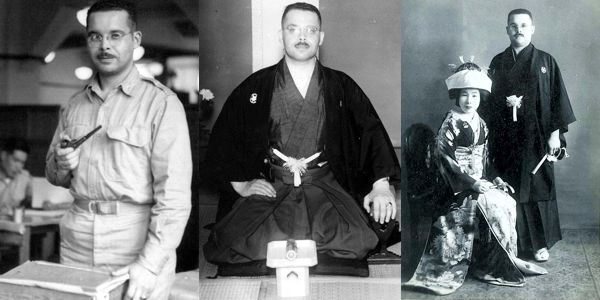 A native of South Lancaster; Massachusetts, Benjamin Hazard was educated largely in Los Angeles area schools in the 1930’s where his interest in Japanese was stimulated by friends in the Nikkei community. When he entered UCLA in 1940, he foresaw the possibility of war with Japan and enrolled in Japanese language courses. The upshot was that he volunteered for the Military Intelligence School (Japanese) at the University of Michigan on December 15, 1942, studying there until June 1943. He was then was sent to Camp Savage for additional language training. Commissioned as a 2nd lieutenant in February 1944, he was assigned to take command of the language detachment of the 27th Infantry Division at Schofield Barracks. The 27th was scheduled to join the V Amphibious Corps in taking Saipan, and it was only during the dry run for this operation on Maui that he saw the entire language team. On Saipan the team was divided up with men attached to regimental and rear headquarters.

Team member Nobuo Kishiue and Hazard would learn of a planned “gyokusai” (final suicide) attack from a Japanese national employed by the Japanese Navy. They kept the division informed of the attack as prisoners came in from the Japanese 105th Infantry Regiment with preliminary interrogations by Hoichi Kubo and Jack Tanimoto. Kishiue and Hazard were a short one or two hundred yards from the high point of the attack that annihilated the first and second battalions of the 105th.

The night of December 31, 1945, Hazard was ordered to fly from Saipan to take over command of two language teams of XXW Corps on Leyte. He commanded the 306th Headquarters Intelligence Detachment during the Battle of Okinawa, and after the surrender of Japan, led the detachment during the initial stages of the Occupation of Korea. He was discharged at Camp Beale, California, on 29 July 1946.

Benjamin Hazard resumed his education in September of the same year at the University of California, Berkeley, majoring in Asian languages (Japanese, Chinese, and Korean) and history. Eventually he was to earn the Doctor of Philosophy degree in Asian History in 1967. He was recalled to active duty in 1948 for a four and a half year tour of duty-including service in the Korean war — ending in 1952. He retired from the Inactive Reserve in 1979 with the rank of colonel. His decorations include the Legion of Merit, the Bronze Star with Oak Leaf Cluster, the ROK Presidential Unit Citation, and the Philippine Liberation Medal.

Alter discharge from active duty, Hazard served as professor of Asian history on the faculties of the University of California, Santa Barbara, and of San Jose State University. Among his numerous publications is the reference work, Korean Studies Guide (1954). He is now Professor of History Emeritus.

A devotee of the martial arts, Benjamin Hazard earned the 7th dan, kyoshi (Grade 7, master instructor) rating in kendo (the art of Japanese fencing), the 4th dan in iaido (the art of the quick draw of the sheathed sword) and in kyudo (the art of archery), and the 3rd dan in naginata (the art of the halberd). He served as advisor to the Kendo Federation of the United States of America.

Unexpectedly Monday Papa passed away in his sleep. Another extraordinary man gone. Sad times now, but looking back on a splendid life filled with good friends.