Seiseki Abe Sensei is one of Japan’s foremost masters of calligraphy (shodo) and Aikido. Born in 1915, Abe Sensei began to practice calligraphy in 1934 when he was 19 years old. He was introduced to calligraphy by his father, who had taught it as an elementary school teacher. As Abe Sensei expressed in a 1991 interview, 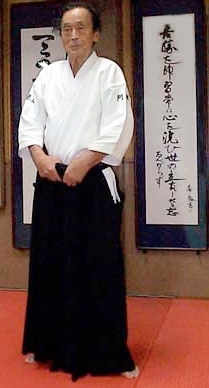 Abe Sensei met the founder of Aikido, Morihei Ueshiba, in 1952. Known as O-Sensei, (great teacher) Ueshiba Sensei is world renown as one of the most gifted martial artists that has ever lived. Abe Sensei noticed that the breathing method that O-Sensei had mastered through aikido and misogi (ritual purification) was like the way of breathing of calligraphy. He saw this was the connection point between these two seemingly different arts, and immediately began his aikido training.

For the last ten or so years of his life, O-Sensei spent one third of every month living at Abe Sensei’s home and teaching at the dojo Abe Sensei had built for him there. O-Sensei also recognized the connection between martial arts and calligraphy and so he began his study of calligraphy under Abe Sensei’s direction. This close proximity, extremely rare within the strict Japanese code between master and student, gave Abe Sensei the opportunity to learn the inner-most aspects of Aikido directly from the founder of the art. O-Sensei promoted Abe Sensei to the highest rank, that of 10th degree Black Belt.

Morihei Ueshiba died in 1969 and Seiseki Abe continued to teach both shodo (calligraphy) and aikido at Ueshiba dojo in Osaka. He had formed over 200 shodo shihan and had about 3000 students in the Kansai region as well as in the United States (New York, Los Angeles) and in Australia. He was an active member of the Japan Art Academy (Nitten), the most important art organization in Japan. Seiseki Abe passed away on May 18, 2011. 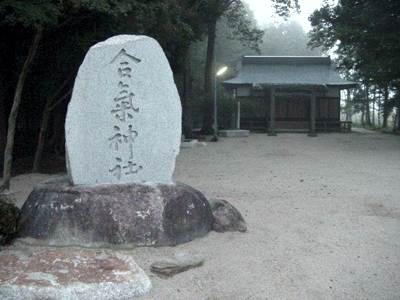 Seiseki Abe is the author of the large “Aiki Jinja” stone carving seen above which sits at the Aiki Jinja shrine in Iwama.