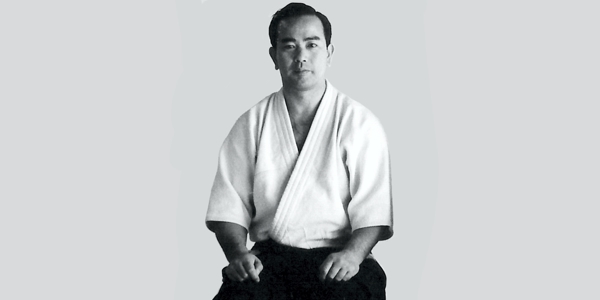 Koichi Tohei was born on January 20, 1920 in Shitaya ward, presently Taitō, in Tokyo. He was a 10th Dan aikidoka and founder of the Ki Society and Shin Shin Toitsu Aikido meaning “aikido with mind and body unified” commonly called Ki-Aikido.

Koichi Tohei was sickly and frail as a child so his father had him began training in judo. Judo helped strengthen his body during his pre-college studies at Keio University, he developed a case of pleurisy which forced him to take a year off.

Koichi Tohei worried that the strength he had gained from his training in judo would be lost so he decided to replace his judo studies with Zen meditation and misogi exercises, which he learned at the Ichikukai Dojo in Tokyo. As with his judo studies, Tohei took his spiritual training very seriously and soon excelled in spite of his serious health issues. After his recovery from pleurisy, Koichi Tohei was convinced that it was his efforts in training his mind and cultivating his ki that had helped him to recover. This stimulated his future development of Kiatsu, a system of treating physical illness by pressing with the fingers and extending the ki into the ill person’s body. Koichi Tohei describes this as “priming the pump” allowing the person to heal themselves.

When his health returned he returned to practicing judo, but Koichi Tohei wanted more than just physical training and determined that judo was not the right art for him to practice. He did however continue to practice judo until when he was 19, in 1940, his judo instructor, Shohei Mori, recommended that Koichi Tohei meet with the founder of aikido, Morihei Ueshiba.

According to Tohei, when he first met with an aikido instructor and practiced some techniques at the Ueshiba dojo, he had doubts as to whether aikido would be of any value to him. His opinion of the art of aikido began to when Morihei Ueshiba entered the dojo and perform aikido techniques on the instructors. Tohei was then asked to step on the mat and attempt to grab Morihei Ueshiba. Tohei’s attempts were unsuccessful, and after this personal demonstration by Ueshiba, Tohei asked to enroll under Morihei Ueshiba immediately. Koichi Tohei continued to train his mind as well as his body with meditation, misogi and now aikido.

Koichi Tohei would continue to train with Ueshiba for only six months before he was sent as a representative (dairi) to teach at the Shumei Okawa school and the military police academy. This was before Koichi Tohei was ranked as either dan or kyu in aikido. Morihei Ueshiba presented Koichi Tohei with the rank of 5th dan after Tohei had begun his military service.

In 1942, Koichi Tohei graduated from the Economics Department of the prestigious Keio University. In February 1944, after receiving military training, Tohei Sensei found himself leading an infantry unit into occupied China. There he understood the importance of calming one’s mind especially under enemy fire, using One Point in the lower abdomen (“seika no itten”). Lacking doctors during his war time service, Koichi Tohei developed the principles of what he later named Kiatsu Therapy, based on sending Ki through the fingertips. After seeing action in China and being stranded there at the end of the war (until his repatriation in 1946), Tohei Sensei stated that Ki principles such as “extending Ki” and “relaxing completely” allowing the Universe to take over helped he and the eighty men under his command to stay safe during the war.

Beginning in 1953 Koïchi Tohei Sensei was responsible for the introduction of Aikido to the West, mainly through regular teaching journeys to Hawaii, but also in the continental United States and Europe. It was the first time the Founder of Aikido allowed for the art to be taught outside Japan. For that reason, Hawaii became a center for the spread of Aikido in the United States, and remains today an important place for Ki-Aikido. During his years at the Aikikai, Tohei Sensei taught Aïkido to many famous Shihan like Hiroshi Tada, Sadateru Arikawa, Seigo Yamaguchi, Shigenobu Okumura, Kazuo Chiba, Yoshimitsu Yamada and Steven Seagal.

In 1969, Koichi Tohei was asked again, by Morihei Ueshiba, to accept the rank of 10th dan, which Tohei finally accepted. Gozo Shioda of Yoshinkan Aikido had been awarded the rank of 9th Dan by Ueshiba in 1961, 8 years before any other 9th dans.

With the death of Morihei Ueshiba in 1969 a split began between the main aikido organization, the Aikikai, and Koichi Tohei. Morihei Ueshiba son, Kisshomaru Ueshiba, inherited the title of Doshu. At the time of Ueshiba’s death, Koichi Tohei was chief instructor of the Hombu Dojo, the headquarters of Aikikai, a title he retained until his official split from Aikikai in 1974.

One of the major causes of the conflict arose from Koichi Tohei’s emphasis on his principle of ki in aikido. Tohei wanted aikido to focus on these principles, using exercises to both cultivate and test ki in the daily practice of aikido. He had already started teaching his new ideas during his own training sessions at Hombu dojo, but the majority of the other instructors would not teach these principles. There were some who agreed with Tohei’s approach, but Tohei’s actions were not welcomed by Kisshomaru and most of the senior instructors. They strongly encouraged him not to teach his principles and techniques in the Hombu Dojo so Koichi Tohei taught his principles outside Hombu Dojo.

Tensions remained among the senior cadre of instructors, who still did not approve of Tohei’s focus upon ki. In 1971, these tensions, together with Tohei’s dissatisfaction with the situation, culminated in Tohei’s creation of the Ki No Kenkyukai, which promoted the development and cultivation of ki inside aikido, but outside the Aikikai “umbrella”. The years of conflict finally cemented Tohei’s decision to break away from the Aikikai and teach his own ‘ki’ style of aikido. whcih he did On May 1, 1974, officially leaving the Aikikai organization to concentrate on his newly created Ki-aikido and Ki-society.

On 15 May 1974, Tohei sent a letter in English and Japanese to the majority of the dojos both in Japan and abroad, explaining his reasons for the breaking away and his plans involving Ki-aikido and the Ki-society. This breakup came as a shock to many aikidoka throughout the world. Koichi Tohei was well regarded by many instructors and students. He was seen as the foremost sensei of Aikido after Ueshiba’s death. This led to several dojos breaking with the Aikikai and joining Tohei in his new style. Koichi Tohei’s new objective was to coordinate all the dojos who joined him and incorporate them into the organization of Shin Shin Toitsu Aikido: “Aikido with Mind and Body Coordinated”. This branch of aikido is still active today although Koichi Tohei himself has retired from running the day-to-day business of the Ki-aikido section and instead concentrates solely on the Ki-society and further personal development of ki.

Koichi Tohei died on May 19, 2011, after spending two weeks in hospital with inflammation in his lungs. At the time of Koichi Tohei’s death, Wataru Hatakeyama, from the Ki Society Headquarters, stated “he went to intensive-care unit (ICU) twice and came back to general ward each time with his strength of Ki, however, his heart got weak little by little this morning and he passed away.”

Dr. Lawrence Day: The Legacy of a Martial Arts Master