Violence has to be a part of your reality-based self-defense training. If you are only practicing techniques but you are not imagining and simulating inflicting injury upon your opponent, then you are not preparing your mind for actual physical conflict. 90% of a winning a fight is mental. If violence is not part of the equation then you are not training for real self-defense.

Most people in society do not use violence to solve their problems. In fact, it is the opposite. Most civilized people try to avoid violence at all cost. Unfortunately, the big bully, the wife beater, the criminal, and the terrorist are not your average people. These types of people use violence as a tool. The more they use violence the more that they understand that it generally gets them what they want; be it money, property, power through intimidation, or even inflicting injury on others just for the sport of it; an alarming growing trend among young people.

Many traditional and sport based martial arts systems do not adequately prepare their students for the raw violence necessary to survive an attack. Oh sure, they teach people how to punch and kick that can induce injuries, but they are not teaching how to use violence as a tool and to overcome civilities when needed. 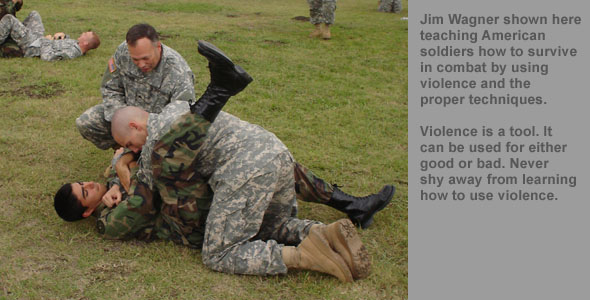 One of the reasons why raw violence is not taught in most traditional-based martial arts schools is that most people equate violence with bad people. Therefore they think violence is “bad.”

In dealing with this topic I’ll give you an illustration that my longtime friend Constable Garth Hoffman, one of the top police defensive tactics instructors in Canada, always tells his students.

Imagine if you heard the news that a rapist-murderer broke into your neighbor’s house. The uninvited man went into the kitchen to grab a knife out of the drawer and proceeded to the bedroom to do his evil deeds. Your unarmed neighbor ends up confronting the criminal in the hallway. During the conflict the burglar slashes your neighbor’s throat, rapes the wife, and then flees. You, like all of us, would say, “That’s horrible. The criminal is a vicious killer.”

Now, let’s take that same rapist-murderer criminal who goes into your neighbor’s kitchen to grab a knife. In the hallway the criminal confronts your neighbor who manages to get the knife away from the attacker and cut’s the criminal’s throat in the struggle to defend himself. What would people say about your neighbor in this circumstance? I can tell you what his family, and what the general public would say, “He’s a hero.” But wait! The exact same violence was used in both situations. How can one be bad and the other good?

In the Jim Wagner Reality-Based Personal Protection system I teach my students how to turn on and turn off violence like a water tap. I learned how to do this as a cop and as a soldier.” To teach this discipline, this mindset, I have many exercises and drills that condition both their minds and their bodies for real conflict. I’ll give you some examples. 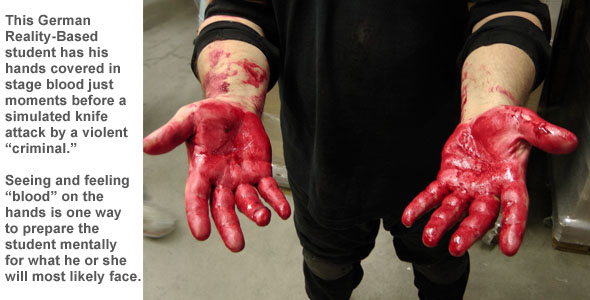 Scenario training – in my courses we don’t spar like many schools do; that is to say bouncing around on the mat or in the ring exchanging blows. I either place my students in a micro scenario (a point in time) or run them through full scenarios (a beginning, a conflict, and a realistic ending). I run my students through modern conflict scenarios that parallel what they are likely to face in real life: drive by shootings, office or school massacres, street robberies, terrorist attacks, criminal style knife attack, an aggressive homeless person begging for money, etc.

Stage blood – I was the first self-defense instructor in the world to use Hollywood stage blood in self-defense training. Sometimes in one of my courses I will dab on some stage blood onto the boxing gloves of my students so that when they do fight they are transferring “blood” when strikes are made. To see the blood on someone’s face after a strike reinforces the fact that there will be injuries and blood in real conflict. I also will pour stage blood into the hands of a student, place them in a corner, and then have an attacker come at them full speed and full contact with a rubber knife. In a real knife fight people get cut. Defense wounds are bloody, and so the student learns how to deal with the slippery physical aspects of blood, but they also are getting “violence inoculation” when they see the blood all over themselves and on their attacker.

Injury reinforcement training – I have a drill called Conflict Cause & Affect where a fighter gets three “free” hits on an opponent. The person receiving these light contact hits will simulate what would actually happen in real life. For example, if someone poked you in the eye what would be your natural reaction? Most people would put both hands to the injured eye in order to protect it from further injury, turn away from the attacker, and moan in pain for a moment. By seeing this reaction the striking student sees his next opening that may be the groin. What happens to most people when they are kicked hard in the groin? You see where I am getting at? This kind of drill not only lets a student see the results of using violence, but it also helps with target acquisition.

These are just a few examples of how I teach my students for the real world. For now on in your own training don’t just go through the motions like many do. When you do a technique imagine in your mind that you are actually inflicting injury to your attacker. Inflicting injury on your attacker is what is going to make him stop, and stopping his attack is what is going to help keep you alive.

When Can You Legally Defend Yourself?

Jim Wagner - March 25, 2011
We use cookies to ensure that we give you the best experience on our website. If you continue to use this site we will assume that you are happy with it.OkRead more