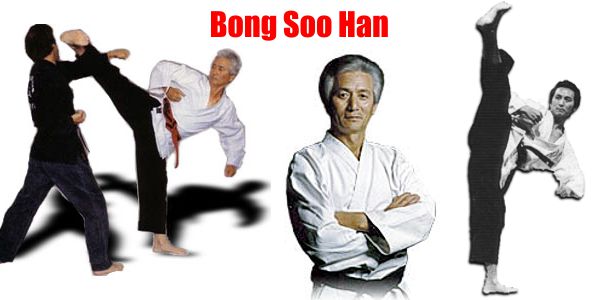 Hapkido Grand Master Bong Soo Han rocketed to fame in the 70’s when he choreographed and performed in the hit movie “Billy Jack.”   He was the first to demonstrate the power of a crescent kick on the big screen in one of the most memorable scenes ever filmed using a technique that would be forever dubbed, “The Billy Jack Kick.”

The scene takes place in a park, where martial artist Billy Jacky (portrayed by actor Tom Laughlin) is standing nose-to-nose with the film’s villain, who has brought along several of his “good ol’ boys” to do a little Texas two-step on the hero’s head.  Realizing that there is no way to avoid a fight, a calm and confident Billy Jack tells his arrogant adversary exactly what is going to happen next:  “I’m going to take my right foot and I’m going to kick you on that side of your face.  And you want to know something?  There’s not a damn thing you can do about it.”

A split second later, he did exactly what he promised, dropping the Villain with a well-placed crescent kick to the side of the head.  It was perhaps the most memorable kick in martial arts movie history, and with it a legend was born.

To this day, what many people do not realize is that the real hero of that scene was not Laughlin, but his martial arts stunt double, Bong Soo Han, who actually performed the kick.  Thanks to Han’s Hapkido skills, a low-budget action film was transformed into a piece of cinematic history.

While The Billy Jack Kick gave the ancient art of Hapkido it’s introduction to the American public the movie barely scratched the surface of the real power of Hapkido as taught by Grand Master Bong Soo Han.

“Hapkido is not like other martial arts,” Han explains.  “Hapkido is not a sport it is total self defense system.  We do not train to win trophies, or to show off.  Our goal is to develop a strong inner character in addition to learning the many self-defense techniques in Hapkido.  The philosophy of Hapkido is to redirect an attack and use an attacker’s power against him.  So in any situation we take advantage of the aggressor’s power.  When we attack it is against an opponents weak side.  For example we use their joints, pressure points, leverage and balance to counter their attack.”

One of the many differences between Hapkido and other Korean arts is the use of jujitsu and Aikido type of throws and locks.  However, the ever-present powerful kick is still the foundation for Grand Master Han and the art of Hapkido.

“The leg is much more powerful than your arm, and you can reach further with a kick and you can attack from any angle using a kick,” explained Grand Master Han.  “I think Hapkido has the most versatile kicks in the martial arts.  So if a person trains hard and develops good kicking skills they will be very effective in a self defense situation.”

Unlike many martial arts of Korean origin, Hapkido doesn’t emphasize kicks at the expense of other fighting techniques.  Instead, Grand Master Han’s art, known as “way of coordinated power,” is a blend of kicks, punches, Aikido & jujitsu locks, chokes and grappling maneuvers.   It was one of the first systems to incorporate such a variety of techniques.  There are no stylized, prearranged training patters such as karate’s kata in Hapkido.  Each technique in the system is put to task in an actual attack situation to see if it is truly effective.

Hapkido is a martial art, not a sport,” Han says.  “In order to master a defense against any situation, you have to know how to defend against kicks, punches and weapons.  You must also learn how to fight on the ground using chokes and joint-locking techniques.”

Another aspect of combat is the ability to use whatever is available to overpower your opponent.   These “dirty fighting” skills were once a valuable part of Master Han’s arsenal when he was a member of an elite Special Forces team.  In the performance of his duties Grand Master Han mastered the kind of skills required to eliminate an enemy soldier in close quarter combat.  Although these skills are not part of his classroom curriculum, Grand Master Han has taught these valuable tactics to various Special Forces groups like the Green Berets and Army Rangers.

“When you are in a fight for your life it is important to know how to use everything and anything to protect yourself,” Grand Master Han explained.  “For example if someone tries to close on you with a weapon use your feet to kick sand or gravel into their face.  A move like this will distract an attacker and give you a chance to overpower him.”

Grand Master Han explained that almost anything could be turned into a weapon, even a magazine.

“There are several ways to use a magazine or a newspaper for self defense,” explained Grand Master Han.  “You roll it very tightly then use it as a club to strike or poke your attacker.  It can also be use to block a weapon like a knife.  When they attack you can strike their wrist, neck face, eyes, or groin.  The secret to making this an effective technique is in how you “flick” the magazine with your wrist.  It is like using a backfist strike, except instead of hitting with your fist, you’re using a magazine.  The snapping of the wrist generates the power of the technique and that snapping action is what causes the rolled up magazine to injure the attacker.”

Even articles of clothing can become a weapon in the hands of Grand Master Han.  A belt for example can be used to block, lock and throw an attacker.  It may then be used as a way to choke or strangle the enemy.

“In Hapkido we use many joint locks and chokes to subdue an attacker,” Grand Master Han said.  “An item like a belt can be used like a whip to keep an attacker at a distance and we can use it to block a punch or kick.  A belt can also be used to entangle an attacker as if in a joint lock, then we use that momentum to execute a throw.   And it’s a very effective choking weapon.  The belt merely becomes an extension of our hands.  These techniques are for very dangerous situations and not to be taken lightly.”

Another common item than can be turned into a deadly weapon is a credit card.

“If you hold the credit card tightly revealing only a small portion of the edge it can be used as a blade weapon,” explained Grand Master Han.  “And with much training, a person can even learn to throw a credit card much like a knife.”

Grand Master Han went on to explain how other items such as car keys, neckties, and umbrellas can also be turned into weapons of defense in the hands of an expert.

“Anything can be turned into a weapon,” says Grand Master Han.   “Even a paper bag can be used to defend against someone who is kicking or punching at you.  If the bag has a handle made from twine you can wrap it around their wrist, even choke them.  Or if it’s a grocery bag, just put it in their face to disrupt them and it follow up with a kick or punch.”

According to Grand Master Han the best self-defense is to be aware of your surroundings.  Know at all times what’s going on around you.  If you’re coming out of a store and going to your car, look to see if anyone suspicious is lurking nearby.  Take an extra second to study the area you are about to enter and if something doesn’t feel right, turn around and go the other way.  Common sense and awareness can be your best self-defense.

“If you know what to do then you have a better chance to survive,” says Grand Master Han.  “However the best way to stay safe is to avoid trouble and that starts by being aware and staying alert to what’s going on around you.”