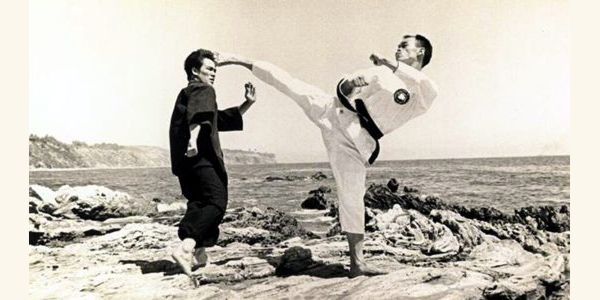 Ike was in the White House and Elvis had just rocketed to rock ‘n’ roll prominence when a 24 year old, 3rd degree black belt named Jhoon Rhee stepped off a plane in San Antonio, Texas in June 1956. From that inauspicious landing, the Korean art of Tae Kwon Do would undergo a rapid and astonishing growth in popularity throughout the Western world over the next 35 years. Some experts contend that as high as 80% of America’s active martial arts population came from, or is now involved in, Tae Kwon Do. Here’s how it happened.

The late Atlee Chittim, a Texan who had studied the martial arts in Korea during the Korean War, sponsored Jhoon Rhee to the United States in 1956. Rhee, who would eventually become recognized as the “father of Tae Kwon Do in America,” says he began teaching immediately at Gary Air Force Base in San Marcos, a suburb of San Antonio. From this humble beginning, Tae Kwon Do (TKD) has grown into the most practiced martial arts in America.

The art, however, almost died here as soon as it had started. Unexpectedly, Rhee, a member of the Korean Army officer training program, was called back to his native country right away to complete a year of active duty.

But the doggedly determined pioneer returned to San Marcos again in late 1957 and in 1958 initiated his college studies at Southwest Texas State College. He soon was able to establish a non?credit martial arts class at the college to help finance his education.

In September 1959, Rhee founded a second class at the University of Texas at Austin. It was here that a young student enrolled who would have a profound impact on American TXD. Allen R. Steen became Jhoon Rhee’s second American black belt after Chittim.

Steen remembers the first time he saw Rhee. “He was putting on a demonstration at the university,” he says. “He sidekicked one of the support beams in the gymnasium and cracked the veneer on it all the way to the top ? some twenty or thirty feet.”
Rhee next asked for volunteers from the audience and picked only the biggest ones to demonstrate on, even though he himself was only 5?feet?4. Ex-boxer Steen was impressed. He and over a hundred other UT students. signed up for lessons that day. But not many stuck with it for Rhee was a tough taskmaster. He worked his young American students until they were ready to drop and then demanded more.

Jack Hwang, now teaching in Oklahoma City, and New York City’s Richard Chun were other Korean Tang Soo Do instructors who came to America and started teaching in the early 1960s. Like Rhee, they also called their art “karate” in those early days. Hwang explains, “Karate was an international word. People knew what it was and so we used that term.”

East Coast TKD pioneer S. Henry Clio didn’t use the name “Tae Kwon Do” either when he began teaching in New York City in 1961. He mentions Los Angeles’ Hidetaka Nishiyama and others as karate instructors who had already come to America and popularized that name here. “We [Koreans] used it because there was no understanding of Korean names [then].”

There were, in fact, many names for the Korean styles. Cho was from the Chi Do Kwan and used the term “Kong Soo Do” when he came to the U.S. And there were others like “Soo Bok Do” and “Bang Soo Do.”

The Chung Do Kwan had the most pull in Korea at the time, Cho claims, and its name won favor. By 1965 almost all the Korean instructors ? and there were probably no more than 30 at this time ? were using the name Tae Kwon Do. But many, like Jack Hwang, admit, “I was putting `Tae Kwon Do’ on my stationary, but I still put `karate’ on my windows.”

In fact, Hwang, Rhee and Cho all sponsored tournaments in the sixties and they all called them “Karate Championships.” Henry Cho, who was a college professor teaching physical education at the time even wrote the entry for “karate” for The World Book Encyclopedia. “I am as qualified as any Japanese [karate instructor] when writing about the martial arts,” he says. “The roots are similar and the techniques are almost identical.”

Putting TKD ? or any martial art, for that matter ? on the map in America during those early days was extremely difficult. For one, the American public didn’t understand what the martial arts were. Secondly, the early pioneers faced continual challenges from street fighters.

Jack Hwang remembers one fellow who came into his school and wouldn’t leave until Hwang consented to fight him. It took only one kick to the stomach to send the man scurrying out the door. “I guess he thought the martial arts were like boxing and did not expect the kick,” says Hwang. “And I didn’t even kick to the head,” he adds with a hint of a chuckle. “I don’t see these kinds of people in the last few years, though. People finally realized that Tae Kwon Do is not just for fighting, but makes for better human beings.” Jhoon Rhee agrees that character building is one of the things that TKD is all about and says he tried to emphasize those virtues from the very start. He remembers giving an early black belt examination for a medical doctor. “Before the exam he and his wife treated us to this big dinner,” Rhee says. “Afterwards we had the test and I had to fail him. Other people said, `How can you fail him when he treated you like a king?’ But I always have believed in the basic principle of integrity with myself and I always try to teach that.”

But if the Korean instructors were busy teaching TKD integrity, the Americans were busy proving TKD was an effective fighting method. American TKD stylists established a reputation as peerless fighters. J. Pat Burleson, another of Rhee’s early black belts, won the first national championships in 1964. Steen won Ed Parker’s 1966 Internationals, beating Joe Lewis and Chuck Norris backto?back. Skipper Mullins, Fred Wren, Chuck Loven, Roy Kurban and Jim Butin are but a few of the many Korean?style champions of the 1960s.

During this embryonic stage of martial arts development in the U.S., there was a movement afoot to unify all the styles into just one or two organizations instead of the dozens that seemed to be springing up. It didn’t work. Further, there began to be a falling out between the Asian instructors and their American students, not only in TKD but in most other arts and styles as well.

But there were, of course, others who maintained a strong relationship. The massive American Taekwon?do Association (ATA), for example, is the result of cooperation between anAmerican and a Korean.

Richard Reed had earned his black belt from the Chung Do Kwan while stationed in Korea during his Air Force service. In 1964, he sponsored his instructor, Haeng Ung Lee, who immigrated and settled in Omaha, Nebraska. In 1966, they founded a regional organization that grew into the ATA in 1969.

Not many Americans and Koreans have stayed together as long as we have,” admits Reed. “Eventually you have two people trying to be leaders, [so] I’ve stayed in the background most of these years and it’s worked out very well for us.”

Indeed, the ATA grew into a virtual empire, eventually claiming some 100,000 members, making it one of the world’s largest martial arts organizations. With its huge membership base, it stands as a symbolic testimony to Korean/ American cooperation.

This article was originally written in 1992 by Keith D. Yates and appeared in the inaugural issue of “Inside Tae Kwon Do Magazine.” Grandmaster Yates has written over 400 magazine articles and eleven books.