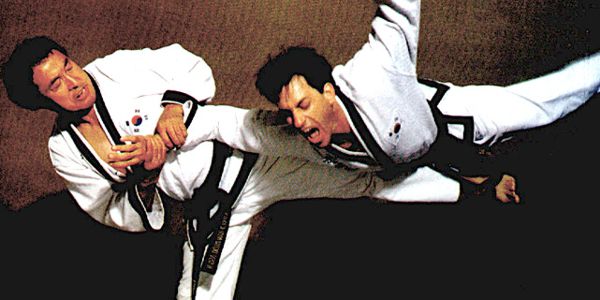 Hanmudo is a cousin of Hapkido and was founded by Grandmaster He-Young Kimm.

Hapkido is more aggressive and harder in nature. Hanmudo uses the same philosophy as Han Tae Keuk (Korean Tai Chi). When a lock is applied in Hapkido, it is followed with a forward motion to throw or bring down the attacker. In Hanmudo, a pulling action coupled with a downward motion is used. The purpose of this is to allow smooth follow up movements to other techniques. Hanmudo motion follows the infinity sign in blocking and attacking movements.

Hanmudo locks are taken from both Hapkido and Kuk Sul.Kuksul locks utilize a bigger circle like in Wushu, whereas Hapkido uses a smaller circle as in Daito-ryu Jujitsu. In Hanmudo, small circle and big circle locks are used depending on the situation.

Ki training in Hapkido is basically stationary, either sitting or standing. In Hanmudo, Ki training starts from lying down, progress to sitting, standing and then to moving meditation.

A unique aspect of Hanmudo not seen in other martial arts is the mental and physical coordination during training. A Hanmudoist has to mentally kihap (Ki yell) “Yu Shin Kang Kwan Han” to coordinate with the certain technique he is doing, so as to let his mind “move” his techniques.

Sequence of Hanmudo techniques are organized in such a way that there is continuity between each and every technique, so as to easily remember and use them. Each technique learned in a particular situation can be adapted for usage in any other situation. Each technique also easily flows into another technique. Hapkido arrangement of techniques depends on the kwon’s (school) founder, so each Hapkido kwon’s arrangement can be different from the other. Hence there is difficulty remembering the order of techniques.

Hanmudo training in character development follows those of ancient Korean warriors of the Koguryo Dynasty called Sun Bi (or Sun Bae). The main emphasis is on development of Penmanship (education) and Swordsmanship (Martial Art). This philosophy is not found in Hapkido.

How Tae Kwon Do Won the West Part Two

How Tae Kwon Do Won the West Part One