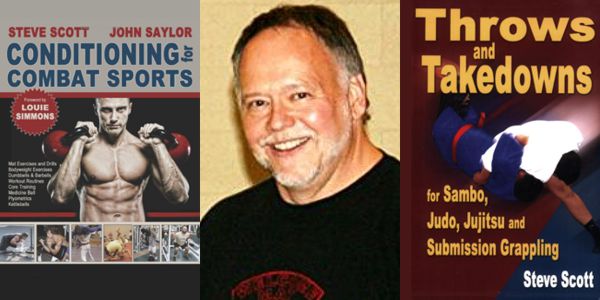 Steve Scott has personally coached 3 World Champions, 2 Pan American Games Champions and 58 National AAU Champions in the sport of sambo. He has also developed numerous judo champions at his Welcome Mat training center, including a member of the 1996 U.S. Olympic Judo Team, almost 100 individual athletes who have won National Judo Championships and numerous athletes who have been members of official U.S. teams in international competition including the Word Championships, Pan American Championships, World University Games and other events. As an athlete, Steve competed in several AAU Sambo Nationals, winning gold twice and bronze once. He also won numerous regional and state sambo and judo championships in the Midwest and competed in numerous U.S. Judo Nationals.

Books written by Steve Scott cover areas of jujitsu, judo, sambo, submission grappling, coaching, fitness training and many other topics. He also has DVDs on these topics. Learn from Steve Scott through his books:

Breakdowns: Techniques for breaking down an opponent from a stable to an unstable position so you can apply a hold or submission technique.

Holds: The most practical holds for controlling an opponent and setting up an arm lock or leg lock to finish him off.

Arm Submissions: 22 armlocks that should form the core of your sport fighting arsenal.

Leg Submissions: 10 core ankle and knee locks that have a high rate of success in finishing a match.

Championship Sambo Submissions Holds and Groundfighting focuses on building fundamental skills around which you can develop the variations that work best for you. Whether you compete in sambo, judo or mixed martial arts, Steve Scott’s emphasis on technical precision and solid fundamentals will help you refine and perfect your groundfighting game.

Sport Sambo Encyclopedia (2019)
Sambo is considered one of the most effective, technically diverse, and dynamic modern fighting styles ever devised. Developed in the Soviet Union and based on Kodokan Judo and wrestling, sambo emphasizes utility over aesthetics. The end result is a fast paced and powerful style that excells in both throwing and groundfighting.

Coaching on the Mat (2005)
An in-depth book on effective coaching. This book is available from Steve Scott for $15.00 (includes shipping within the U.S.).

Tap Out Textbook: The Ultimate Guide to Sumissions for Grappling (2009)
This book has 477 pages with over 1,900 photos covering over 430 different submission techniques used in all forms of grappling, MMA and sport combat.

Conditioning for Combat Sports (2010)
Co-authored with John Saylor, this is one of the most comprehensive books ever written for fitness for any combat sport.

Armlock Encyclopedia: 85 Armlocks for Jujitsu, Judo, Sambo & Mixed Martial Arts (2006)
A “best seller” and one of the most popular books written by Steve Scott. This book covers all aspects of armlocks for any combat sport or martial art. (More Info)

Groundfighting Pins and Breakdowns: Effective Pins and Breakdowns for Judo, Jujitsu, Submission Grappling and Mixed Martial Arts (2008)
This book covers controlling an opponent’s position, breaking him down and pinning him. A very popular book.

The Grappler’s Book of Strangles and Chokes (2007)
A popular book that covers all aspects of strangling and choking for combat sports. This book goes into specifics on why and how strangles work.

Drills for Grapplers: Training Drills And Games You Can Do On The Mat For Jujitsu, Judo And Submission Grappling (2008)
This book is popular and covers a variety of drills, games and exercises that make every workout more interesting and productive.

A handy book covering some of the most popular variations of Juji Gatame. It’s spiral-bound so you can use it as a reference on the mat. This book is available from Steve Scott for $15.00 (includes shipping within the U.S.). Buy Book

DVD: Championship Sambo (2007)
This is a comprehensive look at the sport of sambo presented by Steve Scott with World Sambo Champion Chris Heckadon.

About the Author
Steve Scott is Welcome Mat’s Head Coach and Founder. He started the Welcome Mat Judo and Jujitsu Club on Sept. 3, 1969. Steve is a Shichidan (7th Grade Black Belt) in Shingitai Jujitsu and Kodokan Judo. “I started Welcome Mat in 1969 with the idea that everyone is welcome to train with us. Perfection may not be possible, but excellence is, and if you want to achieve excellence, please join us at Welcome Mat.”

Books written by Steve Scott cover areas of jujitsu, judo, sambo, submission grappling, coaching, fitness training and many other topics. He also has DVDs on these topics.

What Kinds of Martial Arts Are There

Casper Always Has To Be Right