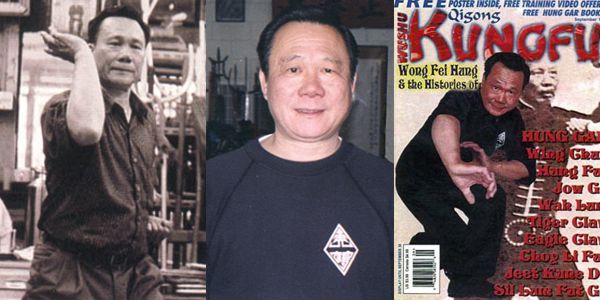 Buck Sam Kong was born and raised in Hong Kong. As a young boy he suffered from poor health, and would get sick often. His mother worried about his sons health wanted him to learn gung fu. Kong sifu’s initial training in gung fu began at the age of six. He began learning Eagle Claw (Ying Jau) gung fu under his mother. Two years later when Kong was eight years old, he was introduced to Lam Cho, the famous grandmaster of Hung Gar. Kong sifu stayed with his master for many years, training hard and learning all aspects of Hung Gar. As master Kong grow up he also became interested in other styles of Chinese gung fu. Besides training in Hung Gar, he also began learning Choy Li Fut from leading masters such as Lee Hoon Koon.

In 1956, Kong sifu left Hong Kong and moved to Hawaii with his family. Several years later he became a naturalized American citizen. During 1961, Kong joined the US army and was sent to Korea. Due to his experience and talents in gung fu, Kong sifu soon became a hand-to-hand combat instructor. Using his skills and experience in hung gar, kong sifu taught unarmed combat as well as bayonet training (bayonet is the stabbing blade fixed to the muzzle of a rifle). Two years later, in 1963 master Kong received his discharge from the military service and returned to the civilian life in Hawaii. It was during 1963, Buck-Sam Kong sifu was asked to teach and eventually established his first gung fu school in Hawaii. Master Kong was the first Chinese sifu to teach gung fu openly to general public in Hawaii and announced that he “..will teach all races-black, yellow, red, white and blue”. This announcement however, was not well received and horrified the other Chinese who wanted to keep the art of gung fu only in the Chinese community. Despite the criticism and problems master Kong faced, he carried on with what he believed which was to teach gung fu to all interested individual regardless of race.

Kong Sifus initial students were mainly karate and aikido instructors who also had schools of their own. However as the school began to grow so did the number of students coming from all kinds of backgrounds. Master Kong’s Siu Lum Pai Association grow stronger with time and eventually became recognized as one of the most successful martial arts schools in Hawaii. In 1974, Kong sifu promoted and organized the Gung Fu Expo in Hawaii International Center which attracted 7000 spectators. He introduced performers from Hong Kong, San Francisco, Los Angles. During the same year Buck-Sam Kong was inducted into the Black Belt Magazines, Hall of Fame as Instructor of the Year.

Kong sifu taught and promoted Hung Gar in Hawaii for more than 13 years. He moved to Los Angeles at the end of 1976 and in 1977 opened his first school in America. Many people joined the school to learn from Kong sifu. Training at Buck-Sam Kong’s Los Angeles Siu Lum Pai school was rigorous. He had many devoted students who trained hard and respected him like a father. During the 1970’s Kong organized two full contact tournaments in Los Angeles. First of these East West Championship was held in 1976, which presented a group of Chinese fighters from Tai Sing Pek Kwa style. The second tournament was held in 1978.

1970’s were the time of “Gung Fu Craze”. It was during these years that gung fu boomed and gained much popularity to due to all the Bruce Lee movies and the TV series Kung Fu. Master Kong’s Los Angle’s school was filled with people who were fascinated by gung fu and wanted to learn. The school attracted all sorts of people, from genuinely interested individuals to troublemakers who walked in the school to challenge the students. However by the mid 1980’s the gung fu craze slowly died down and the number of students enrolling at the school slowly declined. In 1987, Kong sifu closed the doors of his school and opened an electronic repair shop in order to support his family. But, he still continued to teach gung fu privately to his oldest and most devoted students. Buck-Sam Kong carried on teaching Hung Gar privately for the next 7 years. In January 1994, he reopened his Los Angeles school where he still continues to teach today.

Kong Sifu has been teaching and promoting Hung Gar since the early 1960’s. He is one of the most well known and respected gung fu masters in USA. Today Buck Sam Kong’s Siu Lum Pai Kung Fu Association has many branches in and around USA as well as Europe, Hawaii, Mexico etc. Some of Kong sifus well known students are Ed Lane of Washington, Alan Baklayan of Munich/Germany, Vernon Rieta, Donald Hamby. Master Kong currently teaches in Los Angeles/California. See below or the club directory pages for information on master Kong’s full time school. For additional information you can visit the official Bucksam Kong’s Siu Lam Pai Kung Fu Association website.