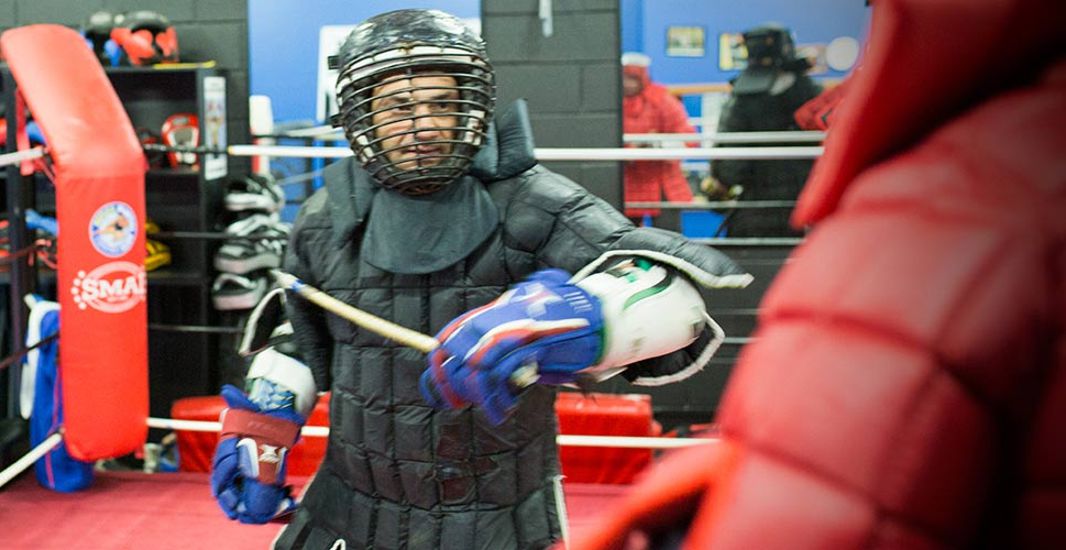 Wollongong’s Reflex Martial Arts Centre came alive with Grand Master Vince Palumbo’s brilliance in two incredible stick fighting seminars that had students buzzing and begging for more. The great weekend was then topped off with the Grand Master conducting a Cacoy Doce Pare Eskrima Grading for the students!

It’s not every day that martial arts students in Wollongong get the chance to train with an instructor of this calabre, and GMV with over 250 fights under his belt, and many World Titles in Filipino stickfighting and an IKBBF World Title in Pro-Boxing, really put on spectacular seminars in Cacoy Doce Pares Eskrima, the art of Filipino Stick fighting, and also in the Cacoy Pangamot Filipino Jiu Jitsu!

Ten Reflex students had their first ever grading on Friday night, and this saw Grand Master Vince take an examination of their skills for the 3rd class brown belt level of Cacoy Doce Pares Eskrima, and the students all did their best to demonstrate what they knew.

Seminar 1 – CACOY DOCE PARES ESKRIMA – (Stick Fighting)
Students were taken through the basics of the style that teaches you to defend yourself against more than one attacker, with the key tool – a rattan stick, or as GM Vince calls it, “The Equaliser!”.

They learn Single and double stick drills, focusing on the basic angles of attack, blocking, follow-ups, and lots more effective techniques while using the eskrima stick to defend yourself.

“Fundamentals” were broken down into easy, progressive sections, so students could understand and learn these very essential techniques used in Filipino stickfighting.

Grand Master Vince Palumbo is a senior student of Supreme Grand Master Cacoy Canete of the Philippines, and he is the winner of over 15 World Titles in Sport full contact stickfighting with and without armour.
He has had over 130 stickfights in competition, and this is why he has a great deal of experience with the Filipino Fighting Sticks.

Seminar 2 – CACOY PANGAMOT FILIPINO JIU JITSU
Students got the chance to try out the techniques of Filipino Pangamot Jiu Jitsu, and we covered basics of superior control take-downs, control positions, submissions, chokes, locks, and some escapes.

This is a very effective form of Self Defence, and it was designed by Supreme Grand Master Cacoy Canete of the Philippines, and these are the words that he told GM Vince while he was training with him in Cebu of the Philippines, “I can’t pretend that these skills from Pangamot will make you a World Champion in sport Jiu Jitsu, but the techniques from this art will help you if ever you end up on the ground in a street fight!”
GMV doesn’t care what your level is, as long as you want to learn, and are not afraid to try! And it’s fun to watch him in action too.

The Adelaide-based legend defies gravity with his airborne flips, and he can twirl the eskrima sticks with the precision of a Filipino stickfighter and has ground fighting moves that everyone would love to master!

But GMV doesn’t just want to entertain his crowd – he also puts students on the spot, and he is only satisfied if they have a go and get the feel of the technique!

Reflex founder Master Dominic Lavalle organised the visit from his instructor and mentor, knowing that his students would greatly benefit from the experience.

Grand Master Vince Palumbo, is the head of Cacoy Doces Pares Eskrima in Australia, and he has won many World Titles in sport full contact stickfighting with and without armour, and he has also won a World Title in Pro-Boxing under the IKBBF sanction in 2004.

He offers classes in this Filipino martial art from Cebu at his Adelaide school the International Combative Martial Arts Academy, and his colleague in Wollongong NSW.
Master Dominic Lavalle holds classes at his Reflex Martial Arts Centre.

GMV would like to spread this Filipino martial art throughout Australia by travelling the different states so as to teach seminars and workshops.

He hopes other centres will follow the lead of Reflex Martial Arts Centre, and take up the chance to learn from a man often talked about in the ‘Who’s who’ of the Filipino martial arts network all around the world.