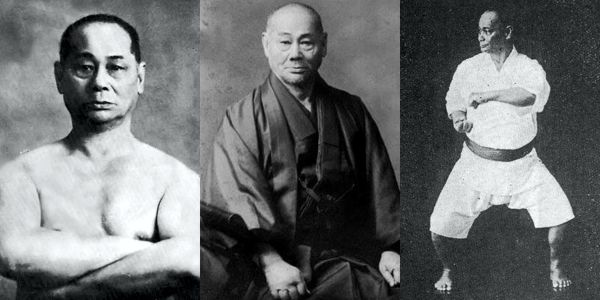 Choki Motobu was born on April 5, 1870 and died on April 15, 1944. He was born in Akahira village in the Shuri region of Okinawa. He was the third son of Motobu “Udun”, a high ranking aji or lord and brother of Choyu Motobu. The Motobu family were skilled at the art of Ti (a grappling art of the Okinawan nobility). Motobu did learn some of the techniques of his family’s fighting system, but because of Okinawan tradition, only the first son, Choyu, was educated and choose to carry on the family’s martial tradition. Because of this situation, he went looking for instruction elsewhere.

Choki Motobu began training extensively with makiwara and lifted heavy rocks to gain strength. He endeavored to become as strong as possible and trained with ferocity. He became known as “Motobu zaru” or Motobu the monkey because of his agility and speed. Eventually, Motobu became the student of Anko Itosu (one of Mabuni’s sensei). Now a young man, Choki spent a lot of time seeking out strong looking men to challenge on the street. He won most of his fights and learned much from these encounters. Itosu sensei was not impressed by the young man’s bullying and promptly expelled him form the dojo.

Motobu’s aggressive behavior soon earned him a bad reputation and many sensei would not teach him. Once man, however, liked the spirit he showed and accepted him as a student of karate. This man was Kosaku Matsumora of Tomari. It was from Matsumora that Choki learned many Kata. Motobu still challenged others to fights often and was eager to develop and improve his fighting skills. He eventually asked Matsumora to teach him kumite, but Matsumora told him to continue to learn on his own. Motobu, however, was persevering and is said to have watched the kumite training through holes in the fence around Matsumora’s dojo.

Motobu’s street fighting served him well (to the detriment of many). He formulated his own formidable style of kumite and began to get much attention in Okinawa and in Japan on his trips to the islands. One day while in Kyoto he witnessed a contest where people were asked to match skills with a foreign boxer. A friend coaxed Motobu to give it a try.

The boxer was arrogant and goaded Choki Motobu constantly. For two rounds Motobu just avoided the boxer’s attacks. In the third round he had enough. He used a practiced technique and promptly knocked the boxer out. The crowd was quite taken aback. They had never seen this kind of fighting. Motobu had simply struck his opponent with a fore knuckle in the temple; a basic technique. Needless to say, Motobu quickly gained a reputation as a master and many curious people came to learn this mysterious new art. Soon, Motobu became a full time teacher.

During this time, Choki Motobu gained great respect for his fighting ability. He was hailed as the greatest fighter in Japan. Many sensei advised their students to go and train with Motobu and learn his kumite techniques (for obvious reasons). He was also asked to teach at several universities. Because of this, many of today’s great instructors of various styles had the benefit of his instruction, so it is clear that his was a large influence in karate.

Choki Motobu usually only taught naihanchi kata to his students and it was his own version with many Ti-like grappling and throwing techniques. However, it was his kumite that had the greatest impact on karate. Oddly enough, there is a story of Choki, full of confidence, challenging his brother Choyu to a fight. It is said that Choyu threw Choki around like a rag doll. After the experience, Choki is said to have humbled himself and adopted more of his family’s Ti forms. In 1922, Master Motobu helped Master Funakoshi start the teaching of Karate to the Japanese. Filled with a new outlook on his life, Master Motobu returned to Okinawa in 1936 and began training with Master Kentsu Yabu. Master Yabu was only man to have ever defeated Master Motobu.

Later in life, Motobu seemed to stress the importance of tradition in training. He strongly stressed the importance of makiwara training and became as enthusiastic about kata as he had always been about kumite. In 1936, at the age of 65, Motobu left Tokyo and went back to Okinawa to visit his instructors to talk about the state of karate in Japan and to make sure that he was teaching the kata and techniques in their originally, unaltered form. Subsequently, he returned and continued teaching in Tokyo. Shortly before World War II, he returned to Okinawa and died in 1944 of a stomach disease at the age of 73.

It is obvious that Choki Motobu was very instrumental in the development of karate and that he was the inspiration for many who trained in the art. It is good to see that, today, millions of people still keep the art alive and strive to keep the fighting spirit of karate which Sensei Motobu so dearly loved.

From The Coslet’s Karate Newsletter September, 1992

Bob White - November 17, 2013
We use cookies to ensure that we give you the best experience on our website. If you continue to use this site we will assume that you are happy with it.OkRead more