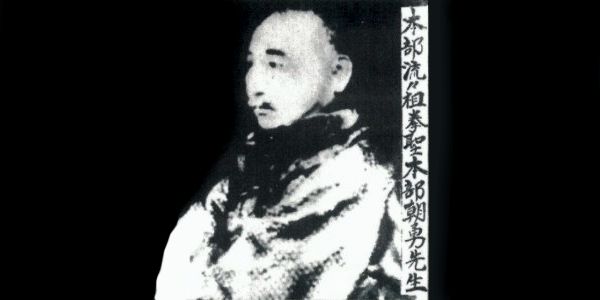 There is a large amount of technical and historic information available about the art that Choyu Motobu inherited from his father and passed on to his students, but very little is written about the man himself. Just a few bits and pieces that I will present here.

Choyu Motobu’s famous brother Chokki Motobu was born in Akahira village, Shuri and very likely Choyu was as well. Choyu was born in 1865, the eldest son of Motobu Chosho, a high ranking Okinawan Anji (lord), and member of the Okinawan Royalty, tracing their lineage to Prince Sho Koshin, the 6th son of the 17th century Okinawan king Sho Shitsu.

As first son, Choyu inherited the secret family martial art while his younger brother, Choki Motobu (1871-1944), was somewhat neglected and picked up martial arts from other sources and from watching his brother’s techniques.

Younger brother, Choki Motobu became famous in the early 1920’s on the mainland of Japan by defeating a boxer in a challenge match thus making Okinawan fighting arts famous in a victory that was well publicized in Japanese newspapers. Chokki, during his lifetime, became renowned as a great fighter, if not somewhat of a brawler. One story says that, confident with his win in Japan, Chokki challenged his brother to a fight, but Choyu played with him and threw him about as if he were a child.

The Motobus were considered adjunct members of royal house and had some special privileges, including inheriting the art that was only taught to the royal family. The first son of each generation or Motobus was trained in the family art known as te, ti, or sometimes Gotende (“palace hand”) passed down through 11 generations to Choyu. Choyu was the te instructor for the last of the Okinawan kings, Sho Tai (1841-1901) who reigned from 1848 until 1879 (when Okinawa was absorbed into Japan and the royalty abolished) and his son, the Crown Prince Marquis Sho Ten.

An interesting quote from Mark Bishop’s “Okinawan Karate”: “The botanist Shinju Tawata remembered that when he was a boy he saw a ti (note: ti = te) demonstration by Choyu Motobu in which Motobu seemed to be dancing and was totally relaxed, but whenever anyone closed on him, he would immediately throw them without interrupting the flow of his dance.

In 1924, Choyu helped to found and manage the Ryukyu Tote Kenkyukai (mentioned in previous articles, the Okinawan Tote Research Club) along with many other senior masters. Choyu was one of the most senior and well respected members at the time and did most of the teaching along with Miyagi Choyun (Goju Ryu founder), Mabuni Kenwa (Shito Ryu founder) and Chomo Hanashiro (another of O-Sensei’s teachers). Not only was Choyu a senior because of his age, but he was a well-rounded martial artist having studied Tote under the great master “Bushi” Matsumura. The Kenkyukai disbanded quickly after Choyu’s death in 1927.

Choyu’s eldest son seems to have died early in life and the next son Chomei (Chomo?) wasn’t interested in the family art. So when karate was being introduced to Japan, Motobu broke family tradition and began teaching his art outside of the Royal Line. Strangely enough, with all of the talent and knowledge present at the Kenkyukai, Uehara Seikichi (1904-), the tea boy at the Kenkyukai, was the person with the most interest to carry on the Motobu family art. Ironically, Chomei eventually became a student of Uehara. Still alive at this writing, Uehara continues to teach “Motobu Ryu”, the name he gave the art in 1947.

Choyu Motobu, sometimes nicknamed “Umei Anjikata”, taught O-Sensei Chitose Unsu and Wansu, two katas that Uehara Seikichi said were not part of Motobu’s regular curriculum. Unsu is unlike the Shotokan and Shito Ryu kata of the same name. Except for these kata, it is unknown if the then young Chitose received any other training from Motobu.

I will say only a few words about the art itself, as there is plenty of material available in the references I give below. The art looks almost dance like, with soft, circular, flowing movements more reminiscent of Aikido than karate with many grappling and throwing techniques. Along with the dance like kata, Motobu Ryu includes a well developed kobudo curriculum passed along with the rest of the art.