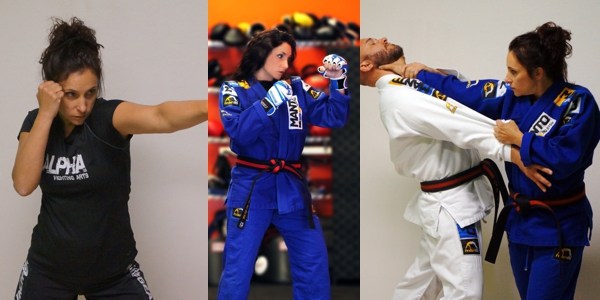 Growing up, Christine Baeza had a passion for the martial arts, however, her parents believed that girls should be sweet, pretty and wear cute little curls.  The thought of Christine becoming involved in sports didn’t fit her parents profile for their daughter, so for years Christine simply imagined herself as a martial artist. Her time spent in bookstores was often down the sports and fitness isle where she could read about others in the martial arts who were living her dream.

Marriage, kids, and life changes led her to realize that she could pursue her passion for the martial arts.  She began, as many do, by walking into a local karate studio. She met with the lead instructor, and her focus outwardly was on training for her boys, inwardly, it was about training for herself.  She realized the benefits martial arts training would bring to her sons, but she couldn’t contain her own enthusiasm about training alongside them.

Christine trained in Shito Ryu Karate for several years then became an instructor for the local dojo’s she was associated with. Christine found that she was expected to be a great kata practitioner, but less emphasis was being placed on the meaning and application of kata, and Christine found herself wanting more advanced training. She wanted to apply her training in her everyday life, both physically and mentally. This desire led her to her current instructor, Nicholas Depaolo, who is an innovative and creative martial arts instructor as well as an advocate for women in the martial arts. Through sensei Depaolo, Christine Baeza became a student of Hanshi Patrick McCarthy and Koyoshi Avi Nardia.