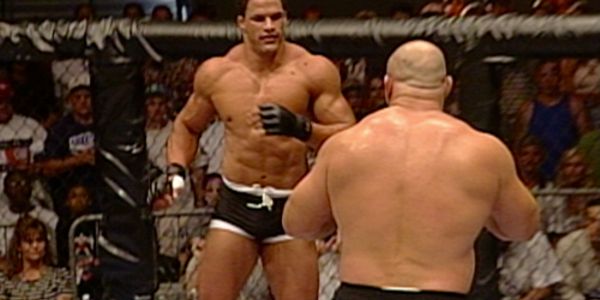 Wrestling champion turned K.A.F. No Holds Bar competitor Mark Kerr has come to grips with one of the toughest sports in the world.  At age 29 this six foot one inch 250 pound fighter is not only undefeated in 9 matches, but he has also never been taken down in a No Holds Bar contest.

One of the reasons why Mark’s opponents have failed in their attempts to take him off his feet is the wealth of wrestling experience he brings into the ring. For more than 16 years Mark was a champion wrestler in high school, college and represented the United States at the Olympic Games.

“In college I wrestled in the men’s freestyle division and competed in the Olympics,” said Mark recapping his non-professional career.

During his days as an Olympic and college competitor, Mark Kerr racked up some very impressive titles: Two time national champion, freestyle, winner of the World Cup in 94, and is currently the 9 time No Holds Bar Fighting champion of the world.

Prior to entering the professional fight game, Mark had no martial arts training.  The first time he “bowed in” Mark traded his wrestling tights for a judo gi.

“Judo and wrestling were a nice blend for me,” said Mark. “It (judo) definitely helped my wrestling out as far as throwing goes. And judo introduced me to a different type of ground fighting, which was a stepping stone to the jujitsu training I am doing now.”

Mark Kerr agrees that it’s a lot easier to throw someone who is wearing a judo gi than it is to execute the same throw against a person wearing wrestling tights. However, there are certain judo techniques that are effective against a gi-less opponent.

“Tripping and sweeping techniques work well,” explained Mark.  “Also throws like Uchi-mata, which is an inner thigh throw, O-soto-gari or back leg take down is another good one. The main thing I get from my judo background is good balance.”

However, it takes more than good balance to stop a guy whose paycheck depends on if he can beat you unconscious or not. The reality of using your skills in this kind of a fight is what makes the difference between professional and non-professional sports, like No Holds Bar fighting.

“In reality fighting you find out real quick what works and what doesn’t,” said Mark.  “A lot of what’s out there now is just a mutated form of martial arts. You take what works from one art and incorporate into your style of fighting. For example in judo you can rest on your back while trying to turn or get a hold on your opponent. In a No Holds Bar fight, this is not a good idea.  These guys are throwing fits and elbows at any part of the body that’s exposed. So I had to learn how to fight from the guard. This is where my jujitsu training has been very helpful.  When you’re on your back in judo, you don’t really have to fight from that position; it can be a defensive posture. In jujitsu you learn to use that position for offense.”

According to this world class wrestler and judo player, the art of jujitsu was the tool that taught him how to fight, not just compete.

“Jujitsu is like combat tactics,” explained Mark Kerr. “It’s like research and development.  When we hit the mat in Jujitsu, we find out what really works and what doesn’t. What I have learned is that the further you stray from the basics the less likely it is for a technique to work.”

In addition to his newly learned jujitsu skills Mark Kerr also had to incorporate striking and kicking to his fighting repertoire.

“I studied Muay Thai fighting to develop better hand and foot skills. These techniques have definitely been a big help to me in my professional fighting career. While it’s true that in many No Holds Bar, or Ultimate Fight contests you don’t see many knock outs by kicks, but I think that’s just because the kicks aren’t being used properly. If you have a good leg attack you can really take a person out of their game, same with a punch. On the opposite side of the coin, if you don’t have a good background in defending against leg attacks, it make you very hesitant as a striker to go in there and try to effectively kick and punch”.

Interesting observations coming from a man who wins all of his bouts with grappling skills.  When asked how effective his kicks and punches are, the world champion had this to say.

“At this particular stage of my development I use kicks and punches mostly to set my opponent up for a take down. However I do want to get to a point where I have the ability to effectively kick and punch someone to where I can inflict some real damage. Then I can change gears and take the fight to the ground. This will make me a more versatile fighter and give my opponents something else to worry about besides my grappling skills “.

To build these fighting skills Mark Kerr endures a rigorous seven-day-a-week training schedule.  Three of those days are devoted to cardiovascular workouts. The rest of his time is spent on the mat building his ground fighting skills, and when he isn’t practicing jujitsu he’s working out in Thai kickboxing.  It’s this type of dedication to being the best that has made Mark Kerr the man to beat, and as many of his opponents have discovered that’s not an easy task.

“One of the reasons why I’ve never been taken off my feet in a No Holds Bar fight is because of my extensive training in wrestling and judo,” explained Mark.  “I believe that cross training is the way to go. Everything I am doing now, the jujitsu, the Muay Thai, along with my years of wrestling gives me a great deal of confidence. When someone tries to take me down, all of my reflexes kick into action.  I can read what they’re going to do through their body movement or by watching their eyes, and sometimes you can just sense what they are going to do before they do it.”

One of Mark’s tips on how to stay grounded when someone fakes high then drops low in an attempt to lift your feet of the ground, is to immediately kick your legs out and away, then apply a body lock around the rib cage. From this position I can stop their attack and drop them to the ground.

“The most important thing when someone attacks you is to keep your balance,” said Mark Kerr.  “For me, I like to force the fight to the ground. I enjoy fighting from the side mount. Locking techniques is how I win most of my matches. I enjoy submission holds. I am getting better at chokes, but it takes a while to get those techniques perfected to where I can apply them with the same efficiency that I currently have with submission holds.”

With more matches insight, this 9 time No Holds Bar Champion says his ultimate goal is to be at the forefront of revolutionizing the martial arts industry itself.

“I want to be know for taking the traditional arts and converting that to an open system of fighting,” says Mark. “I am not interested in getting a black belt or anything like that.  A guy could be a 9th degree black belt and still get his butt kicked in the ring if he doesn’t have a variety of skills that have been proven effective in a No Holds Bar Match. My motto is that it’s not the will of the fighter to win, it’s the will of the fighter to prepare to win. What I mean by that is that as a fighter or martial artist you’ve got to be able to put your pride aside and be able to say ‘Hey I don’t know everything.’ You must be willing to learn regardless of your rank or experience. In my case I am going back to square one in many parts of my training.  So I add these new skills to the ones I already have and the result makes me a better fighter. And as long as I maintain that mind set I will continue to improve in every aspect of my training. And I don’t want be settle for anything sort of being the very best, no matter what it takes.”

Panther Video is proud to welcome Mark Kerr to Panther’s famous line of video training tapes.  To be the best, you need to learn from the best, and this new series can help you do just that.

Follow Mark Kerr as he shows you how to control a fight from the start. Step-by-step instruction illustrates how you can stop an opponent’s attack and get him to the ground. Once on the ground, Mark shows you how to immobilize you opponent with a variety of submission holds.  The same holds that has helped him to become an Olympic champion and professional No Holds Bar champion.

Shime Waza – The Techniques of Constriction