Shock requires IMMEDIATE medical treatment and can get worse very rapidly. So, what are the three steps in treating for shock? Every martial artist should know this.

Throughout my police and military career I am required to take refresher courses and recertify in first aid and CPR (cardiopulmonary resuscitation) every two years. These skills have been vital because over the years I have held people’s bodies together, I have applied direct pressure to wounds, and I have performed CPR twice in my career; one man I lost, and one man I saved. The reason that the military and law enforcement make it mandatory for their personnel to be qualified is because those personnel facing combat situation are most likely to need these skill sets. Yet, it still baffles me how few martial artists lack basic first aid training and CPR training.

Let me ask you a couple of questions directly. Do you have formal training in first aid and CPR? Sure, you may know how to punch and kick and perform a gun disarm, which covers the conflict aspect of the martial arts, but do you also train in post conflict as well? In other words, skill sets needed for after the fight. If a training partner or student of yours breaks a bone in his leg in training, and his eyes soon become wide and glossed over, and he is turning pale, how do you treat him or her for shock? Shock is a life-threatening condition that occurs when the body is pulling the blood to the internal organs in self-preservation. This can damage multiple organs. Shock requires IMMEDIATE medical treatment and can get worse very rapidly. So, what are the three steps in treating for shock? Every martial artist should know this. 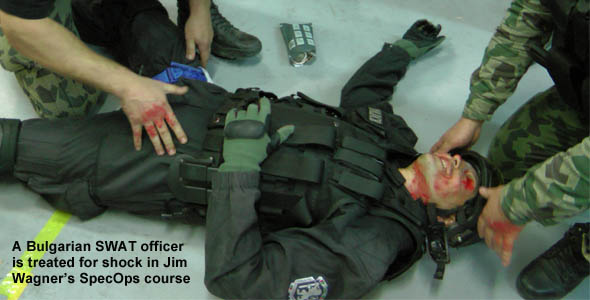 Several years ago I was teaching my Defensive Tactics course in Paris, France. One of my students was launching front kicks at a kicking shield held by his partner and suddenly he snapped his own knee in a freak accident. I just happened to look over at the moment he did it, and he collapsed to the floor. As paramedics were in route I started observing him for signs of shock and took some basic precautions. After all, a person can die from shock, even from non-life threatening injuries. Of course, in police situations I have treated people for shock several times. The symptoms of circulatory shock are as follows: 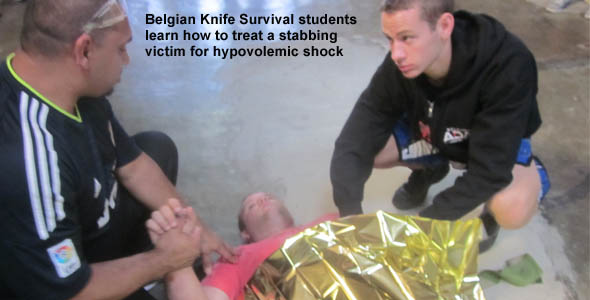 Here is what you need to do to treat shock:

When I teach my Knife Survival course I have one of my students go down to the ground with a “knife wound,” and I teach my class how to treat the person for shock after we have tended to the injury, which is oozing with stage blood that I had placed on a latex cut “wound” before the demonstration.

There is also a condition known as psychosomatic shock. This is not a physical condition, but an emotional state. This is where a witness goes into “shock,” or more accurately fearful paralysis, just by looking at gruesome injuries or witnessing something traumatic. It is a disorder displaying itself physically originating in the emotional process of the individual. This is exactly way in my Terrorism Survival course I throw out severed rubber human heads, legs, and arms mixed with stage blood when simulating a terrorist bombing. This is also why I use stage blood in my Knife Survival course when attempting confined space knife disarms. It is all designed to desensitize my students and instructors, and prevent them from going into psychosomatic shock.

To receive proper first aid and CPR training I suggest you contact your nearest International Red Cross facility because they set the world standards. Don’t put it off. Find the time and mark it down on your calendar. If you don’t do it this year, you probably never will.