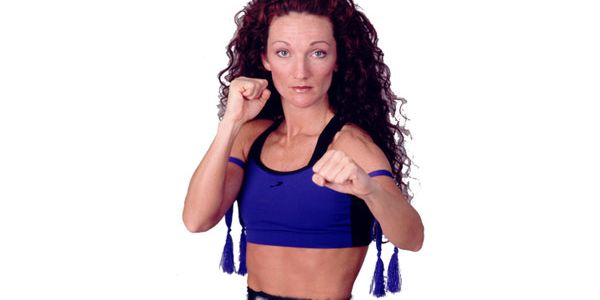 When 29-year-old Crystal Williams takes her 3-year-old pit bull for a walk people tend to give the dog a wide birth because of the breed’s reputation as a fighter. Ironically with this twosome, it’s the other way around.

“Actually Echo is the lover in the family and I’m the fighter,” said Crystal.

As a dedicated student in the brutal sport of kickboxing Crystal is no stranger to fighting.

“I’ve been training in the art of kickboxing for several years now and I’ve had two fights,” Crystal said. “I enjoy the sport for a lot of reasons. It’s a great way to get rid of stress and tension, plus kickboxing is a terrific all around physical fitness program.”

There was a time however when Crystal thought any kind of fighting was barbaric and she wanted nothing to do with such a primitive display of aggression.

“Before I became a kickboxer I couldn’t stand to even watch a fight, never in my wildest imagination could I have imagined that I would ever be in any kind of a fighting sport, especially kickboxing,” confessed Crystal. “My roommate used to watch boxing matches on TV; I thought it was ridiculous. To me they were nothing more than a couple of Neanderthals throwing blows at each other. I couldn’t understand how someone could hit another person with force without being angry. I just couldn’t get into it at all.”

Prior to her entry into the world of kickboxing Crystal had spent years teaching cardio aerobics so when she was presented with the opportunity of testing her endurance in the ring with kickboxer Bob Chaney she eagerly accepted the challenge.

“I thought, ‘no problem’ I can get in the ring, I’m in great shape,” recalled Crystal. “After one round I was sucking air and dying.  I quickly realized that what I’d learned before was nothing compared to what Muay Thai had to offer.”

Crystals preconception of the fighting arts took a 360 turn when she decided to try a class at Bob Chaney’s School of Kick Boxing in Palm Desert, California. From the moment she strapped on her gear and threw her first punch the one time critic was converted into a full-fledged fighter.

“I couldn’t believe how much I liked hitting the pads,” said Crystal. “Then I discovered that there was a lot of technique behind the art of Muay Thai. It wasn’t just people throwing blows and kicking each other. There was timing, strategy and conditioning involved. I liked the fact that I was able to use my mind as well as my body in the ring. After two years of training in kickboxing I’m in the best shape of my life.”

When asked why this one time dove turned hawk chose Muay Thai over a less brutal martial art she said, “Kickboxing seems more functional to me than something like karate. In point karate if I get hit my opponent gets a point they might win even though the punch or kick never really hurt me.  However in a Muay Thai full contact fight, I can hit back. I have no problem with taking a punch, so it seems more realistic in a self-defense sense that I can win or lose based on my overall skills as a fighter and not on points.”

Crystal loves to train, and she’s even found a way to get her pit bull Echo to work out with her.  For the dog it’s like a game of tag. While Crystal zigs and zags around the ring working on her timing the playful pit bull joins her.

“This is a great way for me to practice my footwork and play with Echo at the same time,” said Crystal. “I’ll move in and Echo will bounce back, which gives me a chance to get my timing down, then he’ll jump at me and I’ll work on going back and forth and side to side.  We have a great time together.”

Crystals love for the martial art of Thailand is equaled only by her affection for pit bulls, especially Echo. Like all dogs however, Echo has on more than one occasion put his master’s love to task. For example, there was incident involving an expensive new pair of gloves and protective headgear.

“I came home one day and saw all these little shards of red material all over the floor,” recalled Crystal. “I never even had a chance to put on my new pads before Echo had made a meal out of them. Fortunately he doesn’t do that anymore.”

Under the heading of “never judge a book by its cover” Crystal and Echo aren’t what they seem to be if you go by stereotypes. Crystal looks like she just fell off the pages of a fashion magazine, and Echo, well, he looks like a pit bull. The media has given pit bulls a bad rap, and unfortunately most people base their impression of the breed on that information.  Rarely does John Q. Public hear about the other side of the animal’s personality. Crystal takes every opportunity to praise the pit bulls loving nature, but at one time, she too believed they were killer dogs.

“Like everybody else I believed that pit bulls were killer dogs because that’s how the media portrayed them,” Crystal explained. “However after I began working with them I quickly realized that pit bulls are the sweetest most loyal fun-loving animal you could ever meet.”

Crystals close relationship with pit bulls began when she was looking for a job to help pay for college. She was majoring in Wildlife Preservation and saving money for a trip to Africa where she would be working with Mountain Gorillas. A friend turned Crystal onto a job at a pit bull rescue kennel.  The shelter was looking for someone who would live on the premise and give round-the-clock attention to the rescued dogs. This was an ideal gig for woman who would soon be living with primates in the jungles of Africa and Borneo.

“I lived on site at the shelter for two years and there wasn’t a single kennel I was afraid to walk into,” explained Crystal. “However, since it was a rescue shelter many of these dogs had been badly abused and you did have to earn their trust, as you would any another animal.  But once the dogs got to know you and realized that you’re not going to harm them, they were very loving and playful. Dogs are like humans. If you raise a child badly, that child will behave badly because that’s how it’s been trained. All a pit bull wants to do is to please their owner.  And if the owner wants that dog to do bad things, then that’s what the dog will do to get its owners approval, and vice versa.”

Echo’s father was unfortunately bred to fight and dyed as a result of injuries he received from the jaws of another pit bull.  According to Crystal, her pooch doesn’t have an aggressive bone in his body.  In fact one day while Bob Chaney, Crystal’s kickboxing teacher, was taking Echo for a walk they were approached by a smaller but very aggressive dog.

“Echo hid between my legs,” said Chaney. “That’s how ferocious he is.  Even though he could have easily torn the other dog apart Echo isn’t a fighter.  He’s a lover. Now I do believe however that if Crystal or myself were ever attacked that he would protect us without hesitation, just as any other dog would do for it’s owner.”

At home Echo’s best friend is Bodous the cat. Talk about shattering a pit bull’s image.  There’s no fur flying here, in fact this cat and dog duo can’t get enough of each other.

“I had Bodous for about a year before I brought Echo home,” recalled Crystal. “At first she was a little weary of him, but once she got to know him they bonded quickly. Echo comes up to Bodous and licks her ear and plays ball with her.  They’re so cute together. After Echo falls asleep Bodous will cuddle up next to him for the night and won’t move until he gets up the next morning.”

When the cat doesn’t feel like playing Echo entices Crystal to grab a bucket for an exciting round of his favorite game.

“Kill-the-bucket is Echo’s favorite game,” chuckled Crystal. “Most dogs love balls, but for some reason Echo has a thing for big buckets. I get 5-gallon buckets then throw them as far as I can and he goes nuts chasing the buckets.”

Like most cats Bodous is quite content to hang around the house while the master goes out and does whatever humans do. Echo on the other hand prefers to be with Crystal.  He especially loves going to the kickboxing school with her.

“Everybody at the school loves to see Echo, especially the kids,” said Crystal. “The kids fuss all over him and Echo just loves the attention. One day after class we dressed him up in kickboxing attire.  It was so funny. They put headgear on him and little foot pads then we slipped a pair of Thai kickboxing shorts on him. Echo looked like a real kickboxer when we were though dressing him up.”

Like ET in the scene where the little girl had draped the interplanetary visitor in girls clothing, Echo also took it all in stride. Known officially as the mascot of Bob Chaney’s Kickboxing School in Palm Desert, Echo may look likes he’s ready to rumble, but the passive pit prefers to watch the action from the sidelines.

Interestingly, Echo remains quite passive even when Crystal is trading blows with her fellow kickboxers.  Many dogs would instinctively try to protect their owners, but Crystal says that Echo is able to discern the difference between real danger and her sport.

“He can tell when someone is hurting you in anger or when its part of the sport by the way I’m reacting,” explained Crystal. “If I’m not upset then Echo won’t be upset either.”

Preferring pats on the head to punches in the tummy Echo is content to cheer Crystal on from the sidelines. Before suffering a non martial arts related injury Crystal had a record of 2-1 winning by T.KO”

“Right now I can’t raise my arms or throw any punches because of surgeries I’ve had on my arms. Believe it or not, I never got hurt doing Muay Thai, but my job as a checker put so much strain on my arms that I can barely use them now.”

Unable to throw a punch, Crystal is still getting her kicks on a regular basis at Chaney’s Muay Thai School.

”Even though I can’t work on my upper body and my punching I still practice my kicking skills every day,” said Crystal. “Then one of these days maybe I’ll be able to get my arms well and I’ll get back in the ring again.”

This rough’n’tumble, never say die kick boxer is an asset to her art and an outspoken champion for her favorite breed, the pit bull. And even if she should decide to hang up her pads tomorrow Crystal and Echo will always be a winning team in or out of the ring.